Of all the senses, it's said that scent is the one most closely connected with memory.  Other than a lovely whisky liqueur and a few agriculturally based wafts (*cough*  cows  *cough*), I don't remember too many distinctive odors on my trip through the Highlands.  Photos, especially of the small details, are the things that most accurately evoke the feelings I had at the time.  But before I get into that, we need a soundtrack!

Music became a huge part of my experience in the Highlands.  Interspersed between stories, Eddie included a wide variety of music to complement our travels.  One band, in particular, stands out: Runrig.

Formed in 1973 on Skye and named after a style of croft holdings ("running ridge"), their music is described as "Celtic rock".  The first time I heard them was the morning of our day on Skye, heading out to Uig Bay and the Faerie Glen.  The context had a profound influence on how I now perceive the music, so it may not have the same effect on you.  The scenery plus the melody – including the fact that the song mentioned autumn leaves falling while, in fact, they were! – really made it magical.

Can't see the video?  Watch it on YouTube: http://youtu.be/uMBOXp9jTVM

My advice is not not pay too much attention to the visuals in the video.  The editing and transition tricks can be a bit distracting.  Just listen to the music.  Now, onto the pictures! 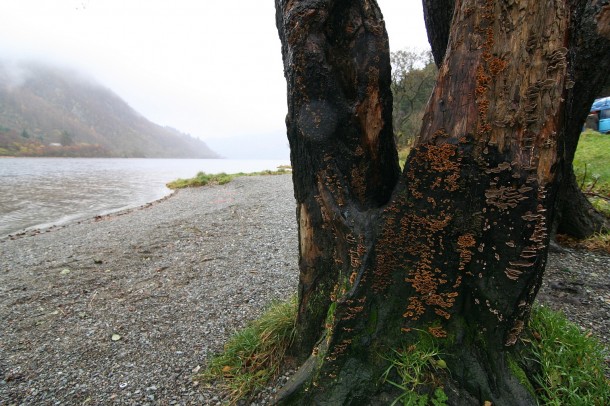 Tree, taking in the view.

It's a shame we didn't have a percussionist to play drum rolls for Eddie's introductions or punctuate his jokes with a bah-da-BING!  As we pulled up to the parking area, his voice rose with amused excitement.  "And here, ladies and gentlemen, is your First!  Highland!  Loch!"  I giggled a bit, but I did enjoy the momentous occasion. 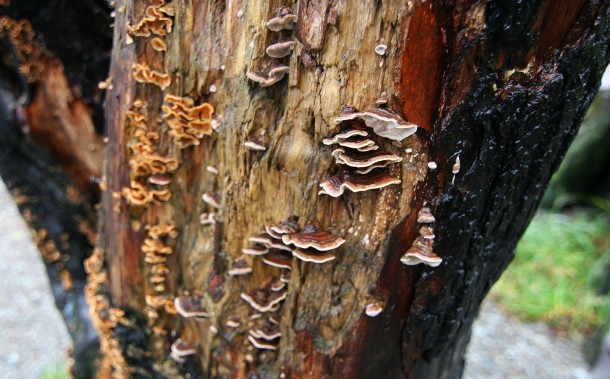 …and your first Highland fungus, too.

I think we were at Loch Lubnaig, but can't swear to it.  I was busy being impressed and stuff.  However, much as I enjoyed the view, it was the fungus on the tree that caught my attention.  Leetle steps for faeries, maybe? 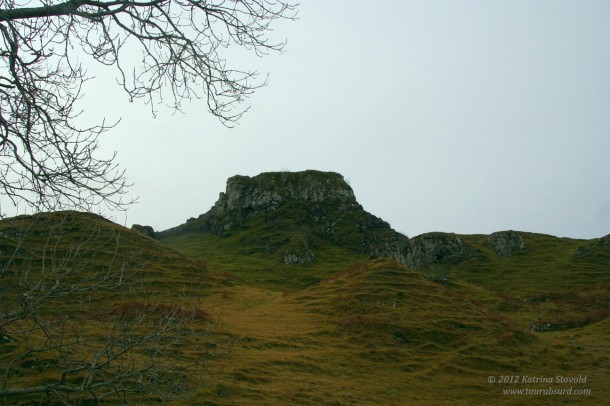 I've already introduced you to the Faerie Glen and mentioned the "castle".  Although the above photo doesn't do it justice, it truly was a magical experience.  I was absolutely delighted to be there. 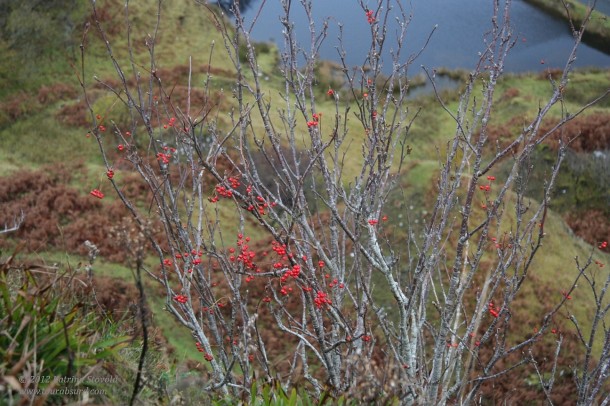 Rowan tree high above the glen.

Although the wide view was nice, it was the little details all over the place that really made it wonderful.  The thistle by the pond, the stone spirals ("…changed every night by the faeries", Eddie informed us with a wink), and even a pair of concerned sheep atop one of the knolls.  With the help of some of my taller co-travelers, I scrabbled up to the top of the castle to take in the view.  This time, it was a rowan tree with ripe, red berries that grabbed my attention.  Said to ward away evil spirits, there are also medicinal uses for the cooked berries.  In fact, it is said to help keep away gout, an evil spirit if ever there was one! 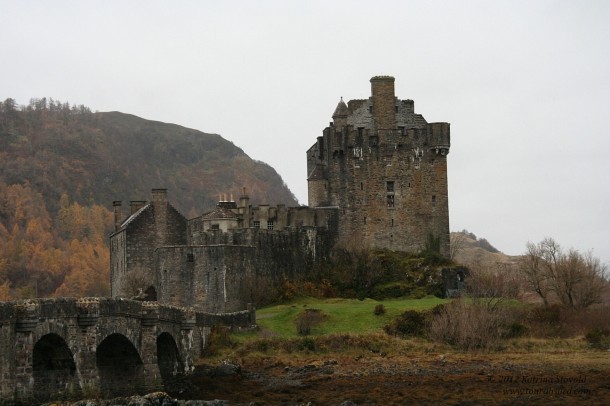 Eilean Donan has been the setting of or inspiration for many films – including Brave!

Later, when visiting Eilean Donan, a human castle, I snapped this shot of the exterior.  We were not allowed to take photos of the interior, though the Castle Keeper himself emailed me some shots for later use (thank you, Mr. Win!).  We were, however, permitted to take photos out through the windows, which I promptly did! 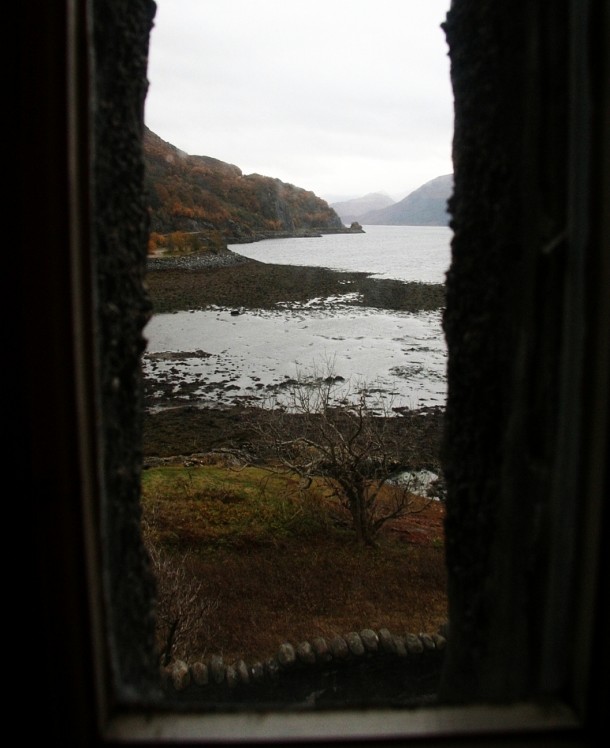 Not quite wee, but it is a smaller piece of the scenery.

Not all windows had scenic vistas, but this one sure did.  I seem to recall that Loch Duich is a sea loch, meaning it is not cut off from the ocean.  It is more of an inlet.  There are local legends of humans falling in love with "seal maidens" (selkies, I'd wager).

The tide was quite low when we visited.  I wonder how it looks when when the tide is full.  Or in spring!

Speaking of seals and sea lochs, I almost forgot this little stop on Skye.  The tide was fairly high, which meant the seals were not languishing on the nearby shore waiting for their closeups.  We saw several distant seal shapes on the little island, but couldn't confirm they were, in fact, the pinnipeds we were seeking.  However, five evenly spaced leetle seal heads did poke up out of the water to stare at us! 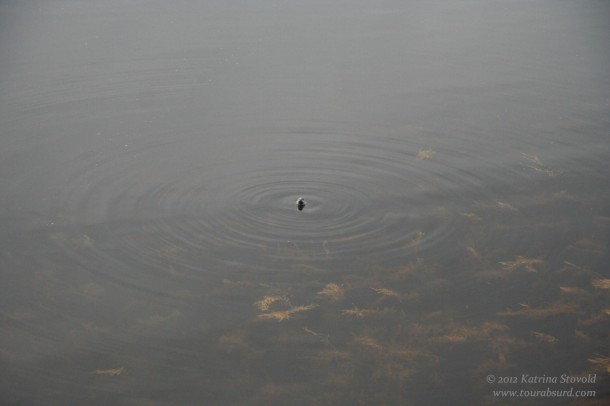 If I was closer I'd boop yer nose!  So cute.

These are Atlantic Grey Seals, which I think is the same kind of seal who visits me in Cork sometimes.  Maybe this is the same one, come to vacation with me?  Aww, I'm flattered.

Can't see the video?  Watch it on YouTube: http://youtu.be/1BRZ-SFFnMg

Besides being a bit like a Sesame Street "Near and Far" segment hosted by Grover, I hope you've enjoyed looking at the macro next to the micro.  Or at least somewhat more wee macro.  And if you liked that first Runrig song, here's one more Eddie played for us.  You can go ahead and watch the video with this one.  I give you permission.

…man, I have to get back there.  Too much magic.  Fills up the soul.

What wee things have you spotted on your travels?

As always, many thanks to Rabbie's Trailburners for this marvelous tour.

19 thoughts on “It’s the little things”