Today's post comes, not from the sunny dunes of Morocco, but from the scenic slopes of Switzerland!  (Say that 5 times fast!  ;)  I have not yet been to Switzerland, though I have a feeling that after reading this story by Meg, my mother may request that I organize an expedition!

I lost track of how many chocolate bars I consumed while in Switzerland.  It all began when I purchased the well known brands of chocolate at the souvenir shops with the vague idea of bringing them back with me as gifts.  I’m not sure how long that unrealistic idea lasted because I began eating the chocolate bars almost immediately after they were in my possession.  It was almost a relief to realize that I was not only not going to bring any of the chocolate back with me, it would not even remain in my purse for more than a few minutes. 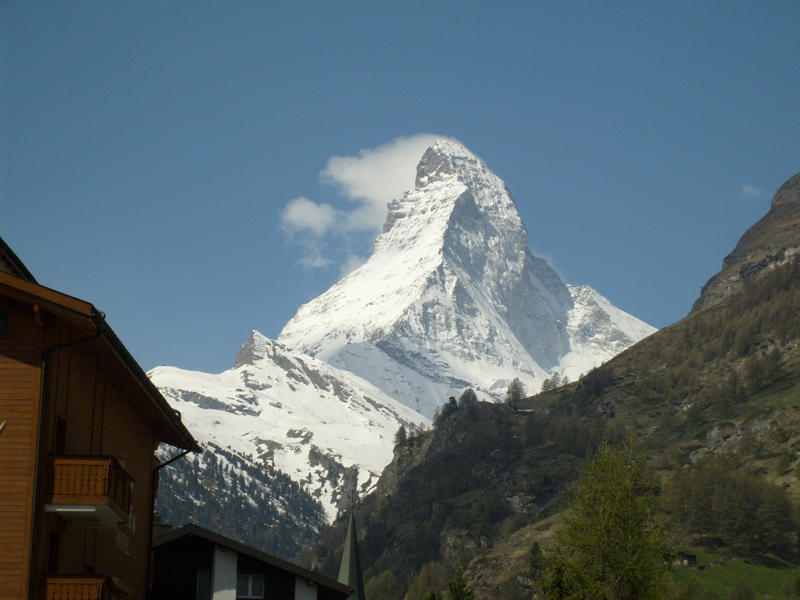 The Matterhorn, icon of Swissness!

I actually thought about including the search for cheese as well as chocolate, but somehow cheese doesn’t seem quite as exciting.  Really, all dairy products could be included but again, chocolate is far superior.

In the first part of my trip I made an exciting discovery.  A few blocks from the tourist shops were tucked away small grocery stores where presumably local folks did some of their everyday shopping.  While I was in one of these stores to purchase a box of crackers, I saw a shelf with chocolate bars on it.  Not the name brand kind, but rather full size bars with a name equivalent to “cost cutter” on them.   When I saw the price, I needed smelling salts.  A full size chocolate bar was priced at 45 cents!  A chocolate bar with hazelnuts was 50 cents, and a white chocolate bar was 60 cents.  I felt certain this must be some sort of knock off brand, but at 50 cents who cares?  I bought one of each bar, and once I found a park bench to sit on, I unwrapped a candy bar and took a bite.  Delicious!  I don’t remember which kind I ate first, second, or third, but the next thing I remembered was looking wistfully at three empty candy wrappers.  These chocolate bars were as good as the ones sold in the tourist shops for ten times as much!

Now I needed a strategy for making the most of this exciting discovery.  My first plan: eat one chocolate bar a day.  My second plan: one chocolate bar per meal.  My actual plan: eat as much as you can until you feel sick, and then repeat the next day. 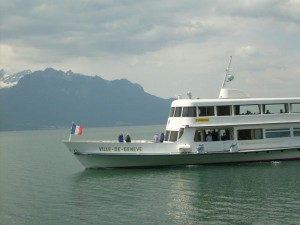 I must admit that wasn’t much of a plan, but I have no regrets.  I decided that since there was marginally some milk in the chocolate, it could serve as a milk substitute for breakfast.  It was providing my calcium for the day.  Every time I saw a grocery store anywhere in Switzerland, I hunted for – and bought – chocolate bars.  They were a bargain!

One morning I was in Zermatt, and the search for chocolate began.  This was a time that it was hard to stay focused on candy because the view of the Matterhorn was so overwhelming that I would forget everything else and just admire the commanding view.  I even noticed that the earliest chalets faced the Matterhorn.  I thought of asking people who lived there, “Do you have trouble getting anything done because you can see this amazing mountain every day?”  But I imagine they get asked that a lot, and probably over time you just live with it.

After I was able to stop staring I resumed my search for chocolate.  It wasn’t difficult to acquire several bars, some with hazelnuts.  I found a park bench where I could sit, munch on chocolate, and people watch.  I never knew I was such a good multitasker.

It was noon on a moderately warm May day, and sitting in the sun felt perfect.  I lost track of time as I enjoyed listening to a noontime musical from a local church.  People walked by speaking many different languages. Finally I got up and strolled around town. 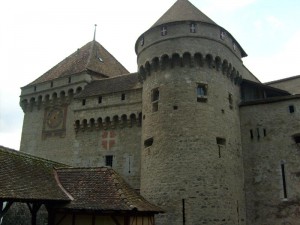 Later when I went into a shop with the idea of stocking up on chocolate for the next day, I caught a glimpse of my face in a mirror.  My nose and forehead were beet red!  So much for enjoying the midday sun.  I think the altitude was what did it.  Surprisingly, I didn’t mind that much, because I left the shop with a good supply of chocolate.

Another day I was in Montreux, touring Chillon castle and walking along the lake.  Although Lord Byron wrote a poem about the castle, I had to admit that I was just as interested in the candy as I was the scenery (and the scenery was exquisite).

Finally the day came when I had to leave Switzerland.  I stocked up on chocolate bars with great sadness, knowing my great candy adventure was coming to an end.  I thoroughly enjoyed all the iconic sights – mountains, lakes, chalets, and beautiful cities.  But the chocolate will be one of my best memories.

Meg King-Sloan grew up in Lexington, Massachusetts, where her earliest travels were car trips to visit relatives.  Her first question was always, “Are we there yet?”  She received a BA from the University of Michigan and an MLS from Indiana University .  Meg currently works as a public library director.  She has traveled extensively and now shares her adventures through blogging.  When she isn’t traveling she’s planning her next trip.

6 thoughts on “Swiss Mountains (of chocolate!)”