Hello, lovely readers. Every now and then I receive email from nice folks who have found my site. Sometimes they ask for travel advice, other times they just send a friendly note to tell me they’ve enjoyed my writing. It’s very sweet and most heartwarming, especially since I’ve been off running wild in the hinterlands of academia for the last few years.

Since the last time I talked about university, I completed my master’s degree, took a bit of time off, and then foolishly jumped back into the fray. Yes, ladies and gentleworms, I have decided to get a PhD. (That’s DOCTOR TourAbsurd to you, thankyouverymuch. Or it will be, by gum!) 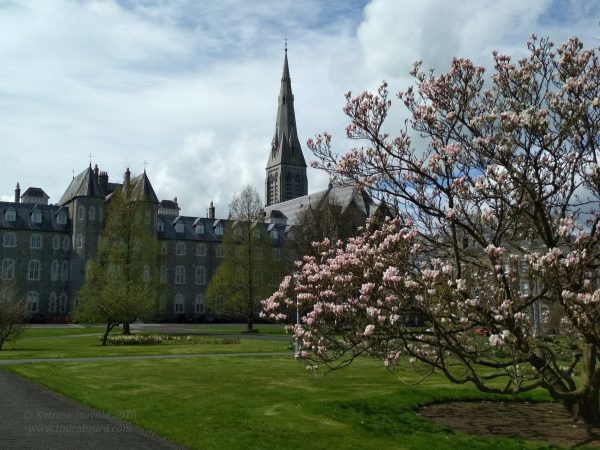 That’s Maynooth. Just a quick phone snap, but such a pretty part of the campus.

I now spend much of my time torturing myself over the reading and writing I should be doing. I’m researching the best ways to build diversity into animation crews. It stems from my belief in equality and equity, as well as my background working in visual effects. Periodically I’ll pop out to London or Dublin to attend conferences about animation or virtual reality, but I rarely break out the big camera anymore. I still write the occasional blog post, but they are usually somewhat acerbic, criticising toxic fandom or an aspect of injustice, etc., etc. Not at all the usual cheery travel stuff one would expect to find here. And yet, my inherent irreverence is still lurking beneath the surface… 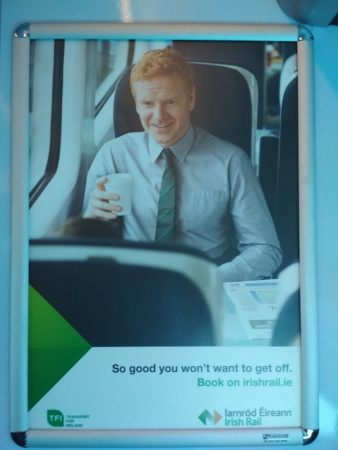 Irish Rail and the questionable caption.
“So good you won’t want to get off.”

Most days I’m on my computer for hours and hours, reading, taking notes, writing or wasting time on social media. I mean, it all ties in, to be fair. But sommmmetimes the investment goes a little beyond research.

Funny animal videos really help keep me going, if I’m being honest, and so does the odd video game. I had an unpleasant encounter with an academic a couple of months ago. It pushed all my stress buttons and really put me in a hole. I’m just coming up for air now. (Wish me luck!)

Speaking of coming up for air, I popped over to London recently to catch up with friends. It was a quick overnight, but it was a lot of fun. I think I’ve mentioned on here that I used to work at ILM. Through connections with colleagues there I’ve gotten a lot of wonderful help and insight for my research, with both the MA and the PhD. I’ve also ended up meeting ILM-ers that I didn’t work with directly, but who are still, in a way, like family.

One of those folks is my friend, Hina. She worked at the company at the same time I did, but somehow we never crossed paths. We ended up meeting, years later, through travel blogging. She graciously allowed me to stay on her sofa (again) for this trip. Although she’s a Londoner through and through, she has lived in California and understands the nearly cellular level of need for good Mexican food. We went out for lunch and discovered with much joy that there was a Mexican shop next door. It’s a good thing I’d only travelled with carry-on luggage, or I’d surely have gone over the weight limit packing my bag with tortillas and spices. As it was, I got two packets of corn tortillas, three bags of chilli peppers, and a tiny Día de Muertos maraca. 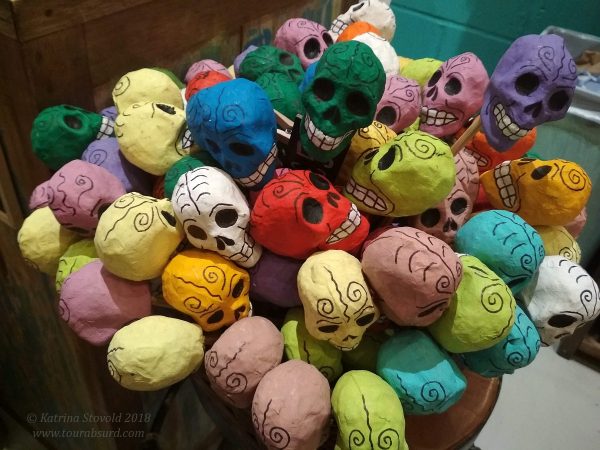 I probably should have gotten two, but my bag was full of tortillas.

Another one of those folks is Kirk. He’s created loads of television and movie magic over the years. He already has a sizeable noggin, so I don’t want to talk him up too much. But you should definitely check out his Facebook page.

I had not actually planned to post public photos of our shenanigans. I mean, most of those were taken on my cheapo phone and aren’t great quality, for one thing. For another, it’s just people you don’t know, like when your neighbour wants to show you their family holiday photos, right? On the other hand, as tired and unclever as I was feeling that night (it was a long day of travel, believe it or not), I laughed an awful lot. And both pals were game for goofing around. I don’t know how Kirk had the energy. His day was probably longer than mine AND he was still on Pacific time. Maybe he was just out of his head with lack of sleep. Or possibly beard magic. Yeah, I’m going with beard magic.

On a related note, I snapped this photo out the window of the plane on the way home the following day. I posted it on Facebook, asking if anyone could identify the location. Don, another former colleague responded within minutes: “Ynys Dinas, Newport, UK.” How had he figured that out? 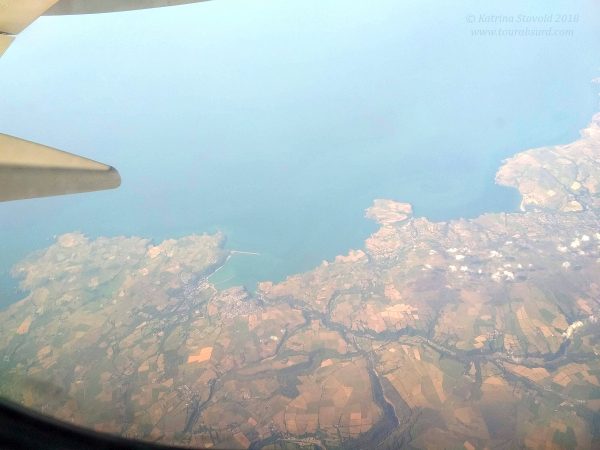 This isn’t where I parked my car!

I’m so glad you asked! A handy website called Flightaware. If you type in your flight info (number or departure and arrival airports), it will show you a map of where your flight travelled. I’d flown from Stansted to Cork, and he was able to pull the info right up. Traced it to the coast and voilà! Tech magic!

Other than discussing the weather, which is something that folks love to do around Ireland, I don’t have much else to relay. It’s also past my bedtime. But I’m still kickin’. Might get back to travel snaps one of these days. Until then, stop by and drag me away from my computer, would you? I need to get out more!