Good morning, party people. How have you been for the last year or so?

If you are (or were) a regular reader here, you may have noticed that I stopped updating the blog. The last post I made here was a personal, mushy feelings kind of post about Agonda Beach. Recently, a more generally informative post I wrote about the same area was published on LiveShareTravel. Finally, there was that post about Rejuvenating with Ayurveda Examiner.com. So… if I went and got all rejuvenated, what happened? 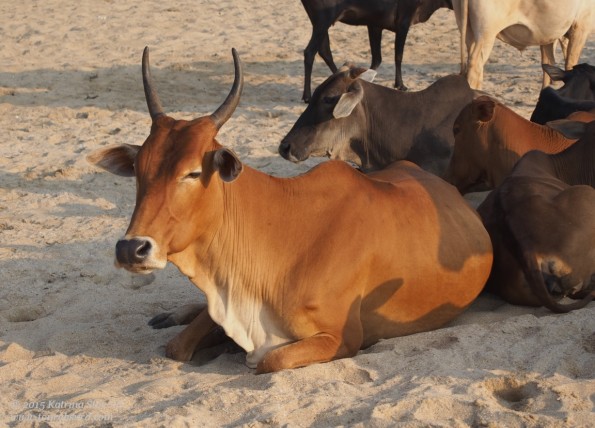 Cow is not impressed.

Before I left for India, someone advised me in a dramatic and portentous tone that, "India will change you!" Dun-dun-DUN! I laughed and shrugged – all travel changes you! – but perhaps they were right.

Upon returning, I had lost all desire to write and blog. I didn't know what I would do instead, but I did know that I had to take a break from the freelance scramble, and that travelling for business (ugh, even typing that creates a knot in my stomach) had to end. I got into travel blogging because I love travel, I love the art and technical considerations of posting stuff online, and along the way, I learned to totally dig social media. But trying to work within an ever more competitive – and arguably homogenizing – medium was sucking the joy out of travel. Something inside just kind of made a *SPROING!* noise and broke. I was done.

I'm used to having a plan, a clear goal, and means to get there. Wanting to do nothing more than sit still and never leave the country again was a strange feeling. The trip to India lasted 6 weeks and for the last, oh, 3 or 4, I had just wanted to be home, beautiful beaches and delicious food notwithstanding. But, ohhh… being back in my tiny house with my fast internet, my familiar neighbourhood, my dog, my own bed… THAT was the luxury I was craving. Yet once I had it, I didn't know what to do next. No desire to travel = no definition of self?

There's a line sung by the beggars at the beginning of Les Misérables:

My circumstances were and are leagues ahead of a French peasant from the early 1800s, so it's not soul-wrenching despair that was the issue. What resonated was the feeling of stagnation mixed with a sort of faith. I knew there was something coming up, some big change, but I just couldn't see it yet. What I discovered was… university.

Despite the fact that people here moan and groan about the government – which, to be fair, is often deserved – their view on the humanitarian side of things is so much more advanced than the United States. People should have food, shelter, and medical care, even when in the midst of a recession. And education should not turn you into an indentured servant for decades. There are even programs to help un- and under-employed people (me!) to go back to school and get a higher education.

This picture really calls for a string quartet.

On my mom's side of the family there are numerous PhD types. I've got aunts, cousins, and uncles who are teaching science and math, heading universities, and even an Assistant State Attorney General. The academia thing, though, was always something they did, not for me. I was off making movies, learning how to shoot an M16, or climbing volcanoes. And although those experiences are something of which I am immensely proud, I always had this little niggling feeling in the back of my head that I'd like some more silly pieces of paper to prove how smart I am. Or something. I dunno. Family peer pressure, perhaps?

What I found was, right up the road at UCC (University College Cork), a Master's program in Digital Arts and Humanities. It sounded like it was right up my alley. So I applied and, before too long, got in!

The only downer? One of the first assignments was …setting up a blog.

Le sigh. Well, I wasn't about to go through all the rigmarole of registering a new domain and arranging hosting again, so I took the easy way out and went with a free blog on WordPress.com. Witness, then, the majesty of …Questions And Tea!

I've used it mainly for assignments – yes, blogging assignments! – and the occasional rant about gender equality. Oh, yeah – my thesis is about building diversity and inclusion into the media production pipeline. My distant past as a visual effects geek, my recent past as a social media geek, and my continual-for-at-least-ten-years life as a gaming geek are all playing into this.

My first go at, uh, kinda publishing an academic paper was tossing a film class assignment up on Academia.edu. We had 4 topics to choose from, including writing about a person who has influenced the film industry. I chose Geena Davis because of her work founding the Geena Davis Institute on Gender in Media and the Bentonville Film Festival. She's pretty freakin' kickass. (If you're interested in reading it, you can view it here: Geena Davis: Contributions to the Future of Equality in Film).

I gave a presentation that opened with this clip from The Long Kiss Goodnight.
I continue to be absurd even in university. (ps: profanity warning!)

Our classroom time is completed. All that's left now is writing the thesis. A couple of days ago I received my exam results and I'm completely jazzed. Oh, did I mention that the grading system in Ireland is totally different from the US? When I saw my marks from the first semester I was devastated and thought I'd done something utterly wrong. US grading usually goes something like 90-100% = A, 80-89% = B, 70-79% = meh, 60-69% = oh, come on, are you even trying?, and 0-59% = hang your head in shame. In Ireland it works like this:

As I was saying, when I received my marks earlier this year, I thought I'd really screwed up. I mean a C? I facepalmed so hard. Where had I gone wrong?!? Thankfully, one of my classmates set me straight. I was actually acing it! And just the other day, got my marks for the whole year and found out I'd aced just about everything else, too! The only exception was my Intro to Modern Irish class – damn, Irish is hard, y'all – where I still got a high 2H1.

I've applied for the PhD program. I don't know if I'll get in. If I do, I don't know how I'm going to pay for it. Maybe I'll defer for a year while I get income sorted. Who knows? I have a feeling it will all work out for the good, one way or another.

I've done a little housecleaning around the site (don't mind the dust under the sofa). I hope you like the new theme. I really loved my old layout, but I didn't have time to maintain it properly. And trust me, there was a lot of questionable code behind the scenes that needed coaxing and love. I've mostly kept up with the Facebook page, Twitter, and other social media channels for the blog, especially Instagram. I don't know if I'll get back to travel blogging on a regular basis any time soon. If and when I do, it's likely to be from a much more relaxed perspective, the way it started out. Blogging for fun and because I WANT to, not because I HAVE to. And maybe some time in the next, oh, 4 or 5 years, you'll be able to refer to me as DOCTOR TourAbsurd.

Hope the last year has been lovely and smashing! Keep travelling, keep smiling, and I look forward to seeing you around the world!

6 thoughts on “State of the Blog: Mastering an Irish university”