A couple of months ago I traveled to Nottingham.  Regular readers will remember my tale of dinner with Robin Hood.  I briefly mentioned one of my other favorite parts of the journey, but until now have not elaborated.  It's time to remedy that situation!

When I was planning my trip to Nottingham, I desperately wanted to go cruising on a canal boat.  I didn't know a thing about them other than that they were boats.  On canals.  But that was enough!

(Click on any photo to enlarge and see a crisper version.) 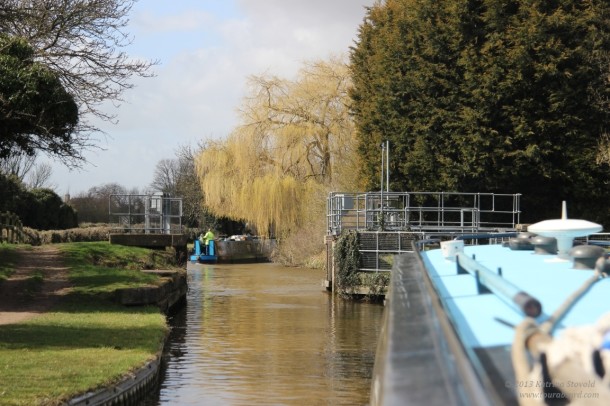 I love this shot.  So full of potential!  What's around the next bend?

Jamie, the owner of Hire A Canalboat, chatted me up post-cruise and politely inquired, albeit with a slightly pained expression, if I'd really said that I "…dreamed of riding in a canalboat".  I think he was trying to suss out if either I, or the tourism folks, had been exaggerating for the sake of dramatic impact.  Well, I really did say that and it really was true.  Ever since I can remember I've been fascinated with water traveling in narrow channels.

I have a distinct memory of camping in Sequoia Kings Canyon and digging a narrow trench away from the water spigot at the campground.  I loved watching the channel fill up and head downhill.  Small twigs served as bridges and the roofs of short tunnels, temporarily obscuring the view of the tiny stream, turning it into a (rather predictable) game of peek-a-boo.  Even today the recollection makes me clap in delight.  It's a bizarre obsession, I admit, but there you have it. 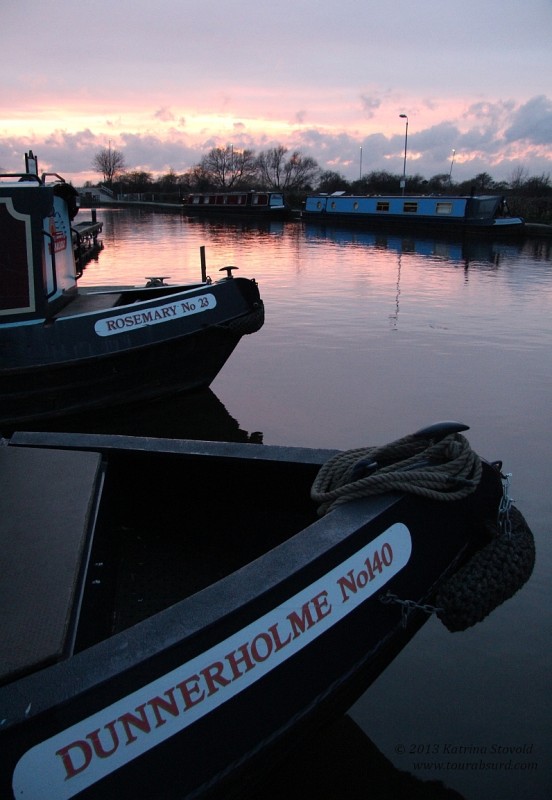 Gorgeous sunset at the Sawley Marina.

The freedom to drive and sail and fly over wide open spaces is something that, as an American, I am conditioned to appreciate.  But something about directional pathways is just magical.  I am sure whatever it is that makes me feel this way is why I love roller coasters, model trains, and river rafting, too.  And yes, Jamie, I actually have recurring dreams about canals and rivers.

When I got the word that I would have the opportunity to ride in a canalboat, I was overjoyed.  I thought, at best, it would be a nice day of riding serenely around with a small tour group – the smaller the better – snapping photos of the lovely English countryside.  I didn't realize that with canalboats (also known as narrowboats), the idea is that you take yourself around.  No tour groups, no set schedule, just a boat, a key, some maps, and instructions on how to go.  A-MAZ-ING! 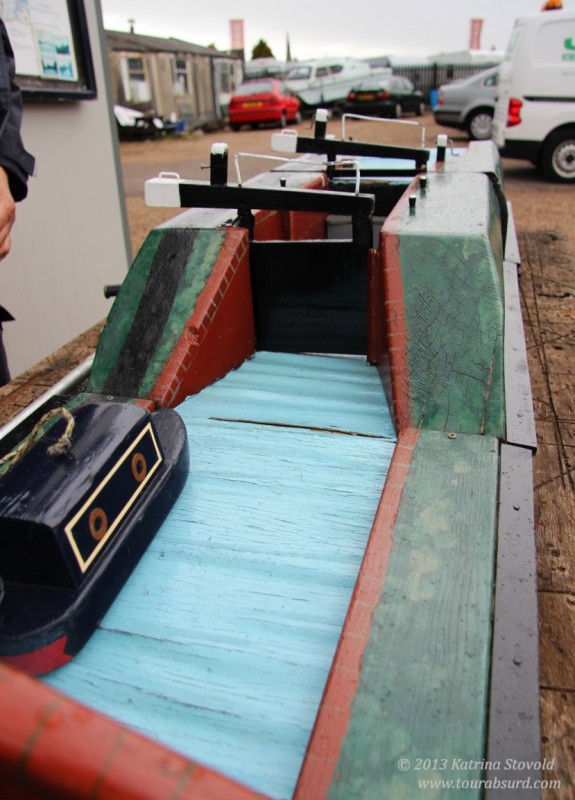 Learning to unlock the locks.

Usually renting a canalboat is a family or group outing.  Traveling by oneself is not really encouraged for newbies, as there is a lot to learn and manage.  Max, one of the nicest guys you'll ever meet, instructed me how to open and close locks using a cute scale model outside the office.  The model has only single gates rather than double, but the terms are all the same. 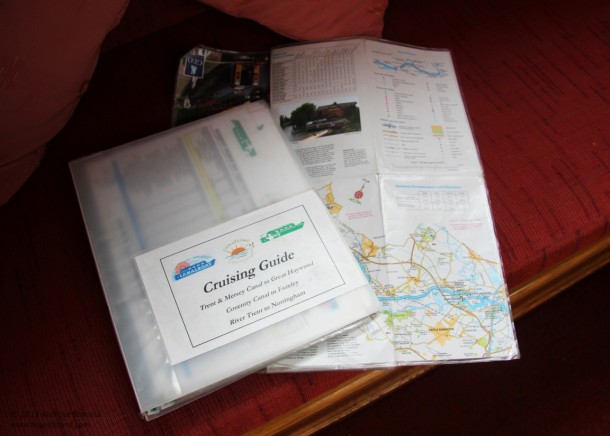 Handy maps and other info are included on every boat.

Vicki showed me the basics of how to start up the engine (reminds me of a tractor – has a kill switch and all) and what to do about power.  The battery charges when you have the engine running or, if you're moored in a marina, you can plug in.  Usually a day of cruising will give you all the charge you need for lights, the hot water heater, and other basics, but if you run things like hair dryers and microwaves you need to plan ahead and mind your consumption. 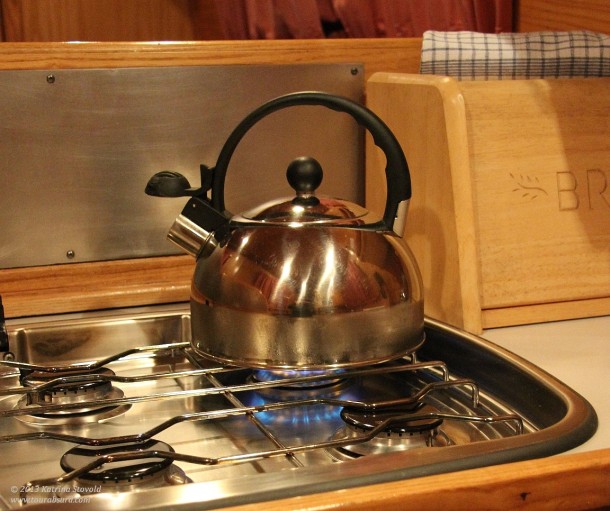 Of COURSE there's a kettle!  Got to have tea, don't you?

There's also a DVD everyone has to watch about the safety features onboard.  I actually enjoyed it and kept pausing to run back into the boat to locate the features being discussed.  The one thing not mentioned – and that is probably very obvious to English people – is how to turn on the cooker.  My Irish cooker (stove) has a very obvious button for the clickety-click spark action to set the gas alight.  This one was, for some reason, more difficult for me to find.  I managed to figure it out without blowing anything up, though, so we'll call it good. 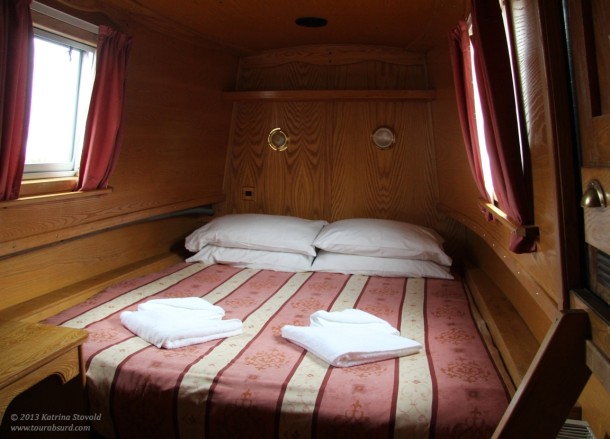 I wish I was there getting rocked to sleep right now…

The boats come nicely equipped with kitchenware (plates, cups, cutlery, pots and pans), a small refrigerator, bedding and towels, and even fuel is included in the cost of the rental*.  Everything was comfy and clean, just worn enough to relieve any nervousness one might feel over bringing kids along for an outdoor adventure, well cared for, and utterly delightful.  Since space is at a premium, storage areas are cleverly placed under seats and behind doors, and tables fold away.

*Note: most outfits don't include the fuel. 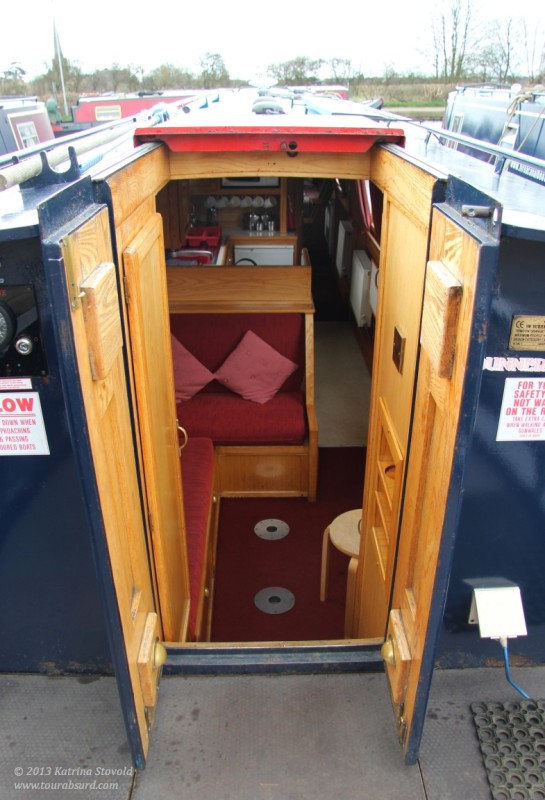 My predilection for delighted hand clapping
is making itself known as I review these picture.  Such fun!

The boats come in two lengths: 45 feet (sleeps 4) and 55 feet (sleeps 6).  They are nearly identical inside, but the longer version has an extra cabin with two single berths.  Since I was only one, I had a 45 foot model.

The key with narrowboats is to think… slowly.  You might be able to get up to the rip-roaring speed of 6 mph (9.6 kph), but you really don't want to get above 3-ish.  Besides breaking safety rules and making it unpleasant for your fellow canal-goers, why do you want to rush on your holiday?  It's all about unwinding and having time to relax. 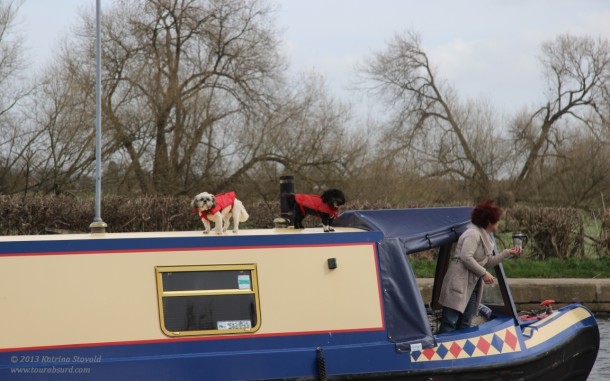 Slow down!  You wouldn't want to dislodge such cute pups, would you?

Narrowboat life is not just for vacationers.  There's a whole subculture surrounding the lifestyle.  People who want to own their own home but can't quite afford a house sometimes purchase a canalboat.  I saw several pensioners living out their dreams, just cruising around smiling and happy.  There were younger folks, too, people who simply enjoyed being on the water.  It all seemed polite, comfortable, and idyllic.

So how DO you get through those locks?  When a first timer rents, one of the staff members rides with them through their first lock to make sure everything goes smoothly.  It's a relatively simple process, but putting the pieces together in your head the first couple of times can take some effort.  Following is a series of photos showing some of the steps, starting when two boats enter from the lower side of the canal. 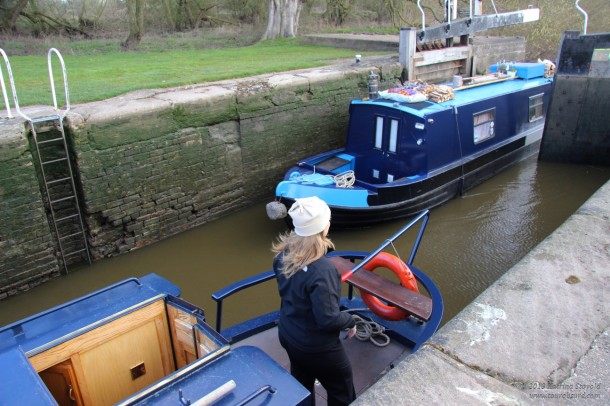 Vicki watches as another boat joins us in the lock.

Some locks fit two boats at a time, as this one did.  It's considered polite to wait for other nearby boats to join you if you see one heading in your direction.  If you see a boat heading in the opposite direction, but the water in the lock is at their level, wait for them to go first.  You know, common sense and courtesy kind of thing.

The gate is then closed behind the boats.  Usually the flow and pressure of the water is enough to keep them shut once in place.  Sometimes, if a gate has been damaged or is in need of maintenance, it might be necessary for one member of the crew to hold part of it shut until the water pressure starts to build, but this is rare.  The Canal & River Trust (formerly British Waterways) does a good job of maintaining things. 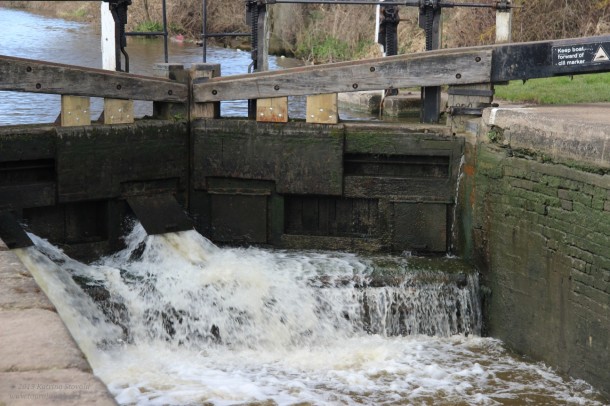 Max opens up the gate paddles (holes to let water in or out of the lock) on the left.

You can see the cill (pronounced "sill"), the ledge just under the gate paddles, on the upper end of the lock.  There are corresponding marks on the side in white paint.  Have to be mindful of where the cill ends to avoid getting your boat grounded when going from the high side to the low.  Also need to leave space to avoid getting water dumped into the front of your boat. 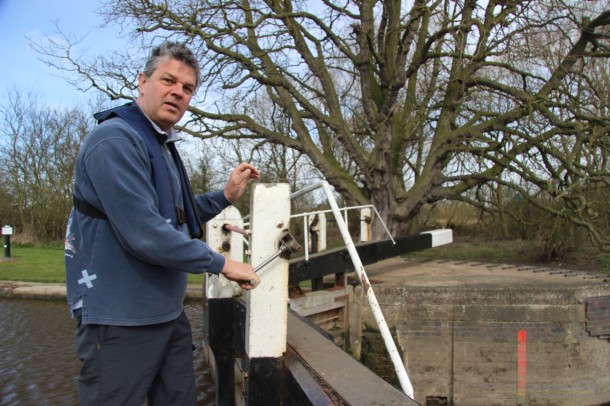 There can be another set of paddles, the "ground paddles", that let water in or out through holes that are below the waterline.  Some locks have both types of paddles on one gate; some have ground paddles on one gate and gate paddles on the other.  In either case, you'll need a windlass or "lock key", a detachable crank, to operate the paddles.  The lock keys don't stay at the locks; each boat has one or more aboard. 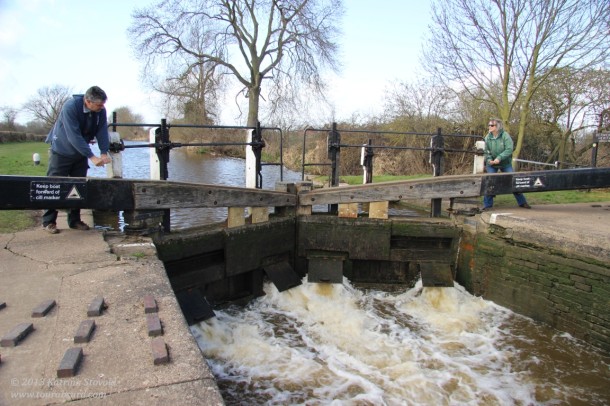 Our fellow canalboater joins in and opens up the gate paddles on the right.

After the lock is filled to the upper level of the canal, the gates are easily opened.  There are mistakes that you can make, but the physics of the situation are pretty clear.  Gate doesn't open?  Water's not level yet – simple! 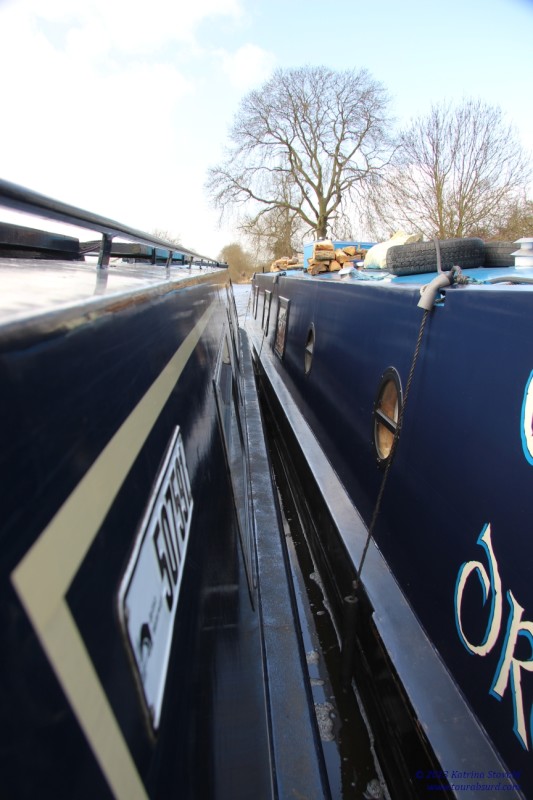 Squeeeeezing out of the lock… 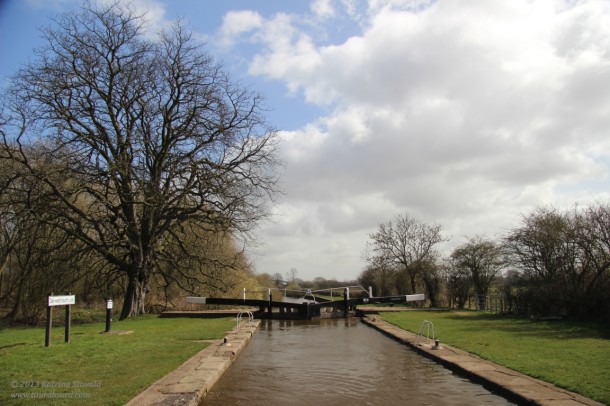 Voilà!  You have made it through your first lock!

I was only onboard for one night and a day, which is really a very silly thing.  The right way to do this is take at least a week.  There are canals all over the UK and to do a nice circuit you need to allow around 7 days.  If you want to take a bigger circuit – maybe even visit London! – allow 2 weeks.  The maps and charts have distance / time markers that help you plan your trip based on traveling at the recommended speed.  The wonderful staff (yes, biased, but I really liked them) at Hire A Canalboat will help you make plans, too.

Why, you ask, would someone not obsessed with water coursing through channels be interested in doing this?  Here are some reasons:

A couple of family friends who now live in The Cotswolds came up to spend the afternoon with me.  It was wonderful being able to meet at a pub along the way, then invite them aboard for a short cruise, sharing tea and tales of the past (my first visit to the UK at the age of 8!).  One of them was English but had never been on the canals himself.  After the ride, which they both enjoyed thoroughly, they said renting a narrowboat for a holiday was definitely on the list.

I had originally planned on keeping the number of photos in the post to the minimum.  I put together a slide show to insert instead.  Turns out I couldn't help myself and put in bunches, as you may have noticed.  Still, there are a few in the collection that you haven't seen yet.  (When the slide show is playing, be sure to roll your mouse over the frame and click on the little speech bubble in the lower left to view the captions, then click the play button again.)

The swan at the end of the slide show peeked in the window just as I was packing up and having my final conversation with Jamie.  The gleam in the bird's eye seems to indicate that it knows I will be back for more.  And you know, I believe it is correct!

My trip on the canals was arranged by the lovely folks at Experience Nottinghamshire
and Hire A Canalboat, but the opinions are entirely my own.

14 thoughts on “Narrowboats, because I dream on the river”