This is a guest post by… my mom!  She lives in the California desert.  Here she shares an engrossing tale of how an ice cream stop led to a dip into history.

My mother says her dad used to have a bit of "wanderlust."  He'd  grab the car keys and say, "C'mon kids, let's go for a little ride!"  The rides lasted from an hour to a day and were always spontaneous. She isn't surprised by my penchant for impromptu wanderings.  She just says, "You got it from Grandpa," like it's some sort of mutant gene. Heck, maybe it is. 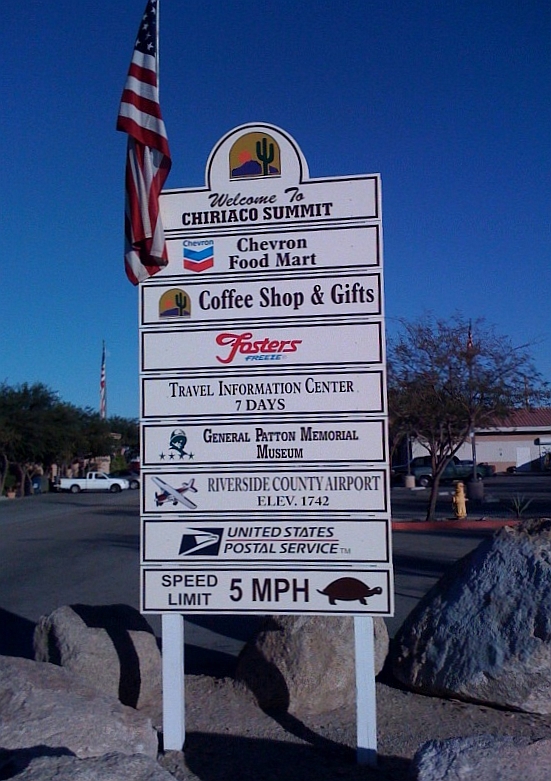 Those are some pretty fast turtles!

I have the use of a brand new car this week, courtesy of good car insurance, while my 11-year-old car is having its bumper repaired.  (I was rear-ended on a freeway interchange).  My feet were fairly tingling with the familiar restlessness yesterday, so I gave in to it.

We're in our "Paradise" phase of desert weather, having 75-degree days while the rest of the country girds up for winter.  The sky was clear blue and the light made ever-changing shadows on the purple and pink mountains . I jumped in the peppy, newer-and-cooler-than-mine car and headed east on a gloriously straight and nearly empty stretch of freeway, singing loudly with the radio and tapping the steering wheel with the beat.  For a blissful half-hour, I wasn't thinking about home repairs, property taxes, or trying to stay on an exercise regimen. 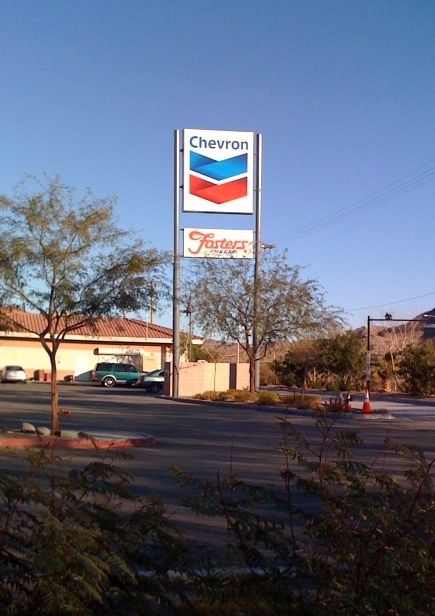 The road gradually gained elevation until it reached the stunning height of 2,000 feet and a sign proclaimed "Chiriaco Summit."  Another said "General Patton Memorial Museum."  That was enough to pique my interest, and the "Foster's Freeze" sign on the Chevron station sealed the deal.  General Patton AND soft serve ice cream? Who could pass that up? I turned off the freeway.

When I stepped into the modest one-story building fronted by a statue of Patton and surrounded by quaint-looking old tanks, the young man at the counter said, "How many, please?"

"Because this whole area was a training center where he trained troops for desert combat during World War II."  I looked at the huge topo map of a training area that appeared to cover most of non-coastal Southern California, including the entire Salton Sea basin.

This sounded promising.  We now have Marines doing desert training in Twentynine Palms, but back then, there was a lot more empty desert available for training an army in a hurry for a conflict that wasn't going well in Europe.  I paid the five bucks. 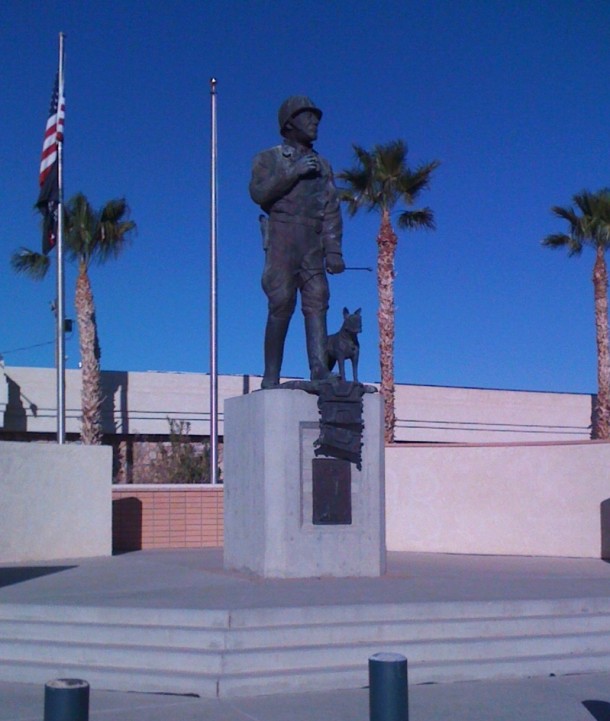 Statue of General Patton.  …and his little dog, too!

I sat in the midst of about 20 folding chairs to watch the video about General Patton, expecting it to be dry, outdated, and kinda boring.  I planned to watch a few minutes then leave to look at the exhibits.  Twenty-six minutes later, I was still glued to my chair watching the credits roll. 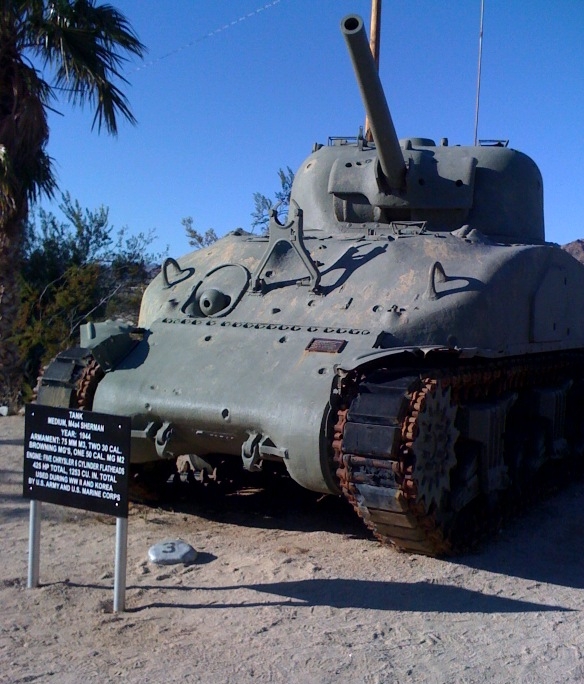 This is a "medium" tank.  Do they come in XXS and XXL?

What an amazing man.  He struggled with academics at West Point but excelled at athletics.  He turned out to be one of the most respected leaders of pretty much any time in history.  His 3rd Armored Division fought ferociously and fast in the African desert,  then dashed  many miles to save the pinned-down 101st Airborne in the Battle of the Bulge.

According to the video, the men of his division loved him.  They covered more ground, had more victories, and lost less men than any other.  When the war was done in Europe he asked to be sent to the Pacific, but was denied.  A few months later he died from injuries he got in a car crash on a German Superhighway (precursor of the Autobahn?).  I've seen 90-minute movies that were less engrossing and tragic than that video. 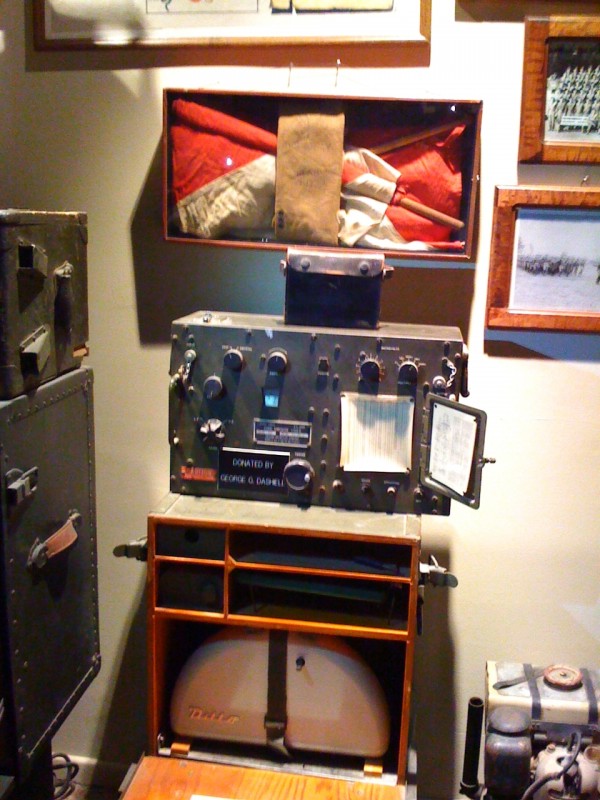 The exhibits were as you would expect; lots of gear and medals and pictures.  Lots and lots of them.  Then, near the exit, I found a glittering lighted cabinet full of beautiful metal carvings.  I wondered what they had to do with George S. Patton.  This was my introduction to Trench Art.

Apparently, mostly during World War I but also during WWII, military guys made objects of art  from spent shell casings while they were waiting in the trenches, not knowing if they would live or die.  I was struck by the yearning of the human heart for beauty even in the bleakest of circumstances. 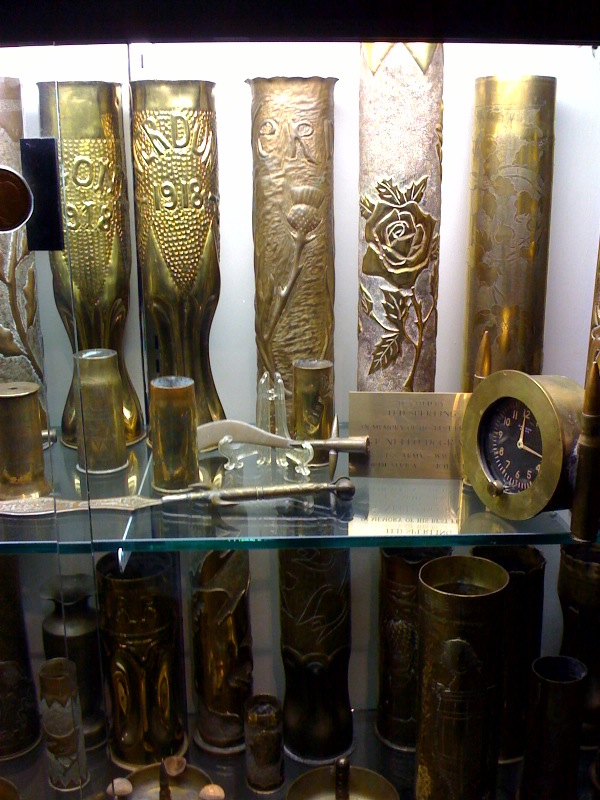 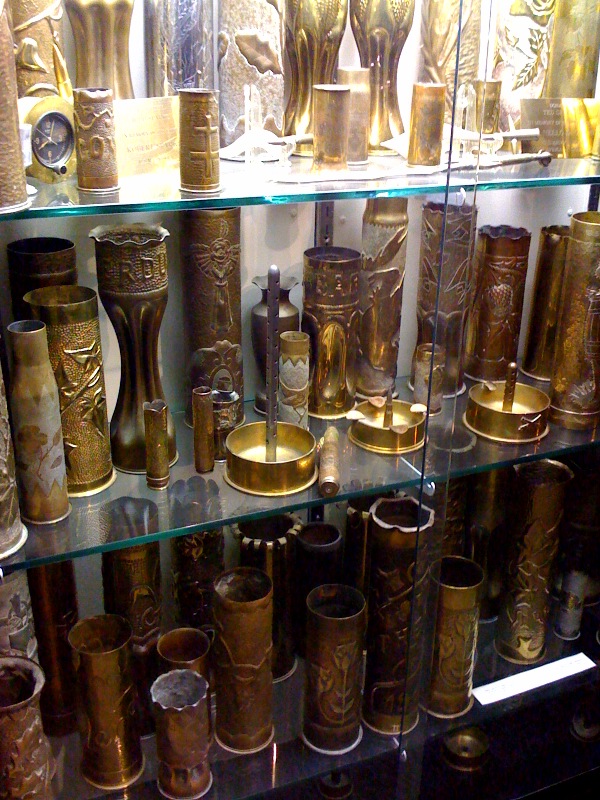 My drive down the summit wasn't nearly as raucous as my drive up.  I'd been transported to another time and reminded of the people who fought hard for me to have the privilege of whizzing down a freeway singing at the top of my lungs.  Lucky for me they included leaders like Patton and men like the creators of trench art.

I think spontaneous wanderlust must be a way of connecting with the Greater World.  I remember my grandpa always seemed happier when he came back from one of his little trips.  I am, too.  And it's great serendipity that this particular connection happened a day before Veteran's Day.  Hats off to all of you who have served or are serving.  And thank you for my freedom to enjoy blue skies and purple mountains and to sing off-key at the top of my lungs while driving into the desert for no particular reason.

So my mom is a blogger.  How cool is that?  (Note: I wrote the cheeky captions; mom wrote the respectful ones.)  She's also working on a book or two about our Mexican heritage and family connections in Arizona.  She hasn't written much this year, but if you clap and say, "I believe in fairies!" enough times, maybe she'll pick up the keyboard again.  You can read more of her musings at Bemused Boomer.