Today's post is brought to you by my Uncle Bryan!  He and my aunt travel to Japan pretty regularly to visit my cousin, who lives there.  Here he tells of a lovely day trip you can take in Fukuoka.

It may be only a twenty minute train ride from the hustle and bustle of Fukuoka, Japan, but the Nanzoin Temple seems like a world away.  Nestled on the side of a steep mountain hillside in the tiny village of Sasaguri, moss covered trails meander over babbling brooks and waterfalls and each turn in the path surprises with a new altar or Buddhist statue.  The mountain itself is serene and majestic with tall redwoods, giant bamboo, ferns, and blossoming fruit trees. 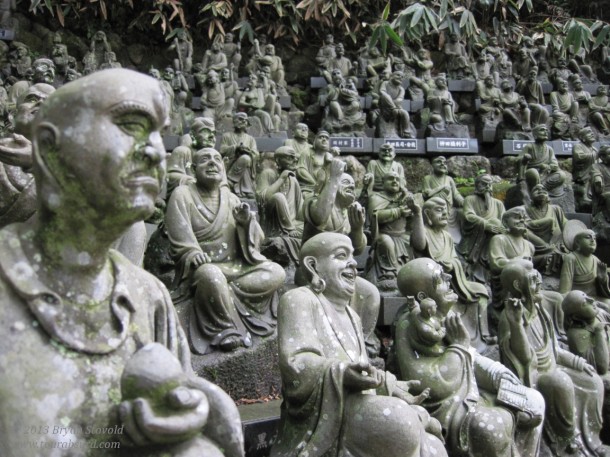 Try to find two faces that are alike.  Go ahead, I dare you. 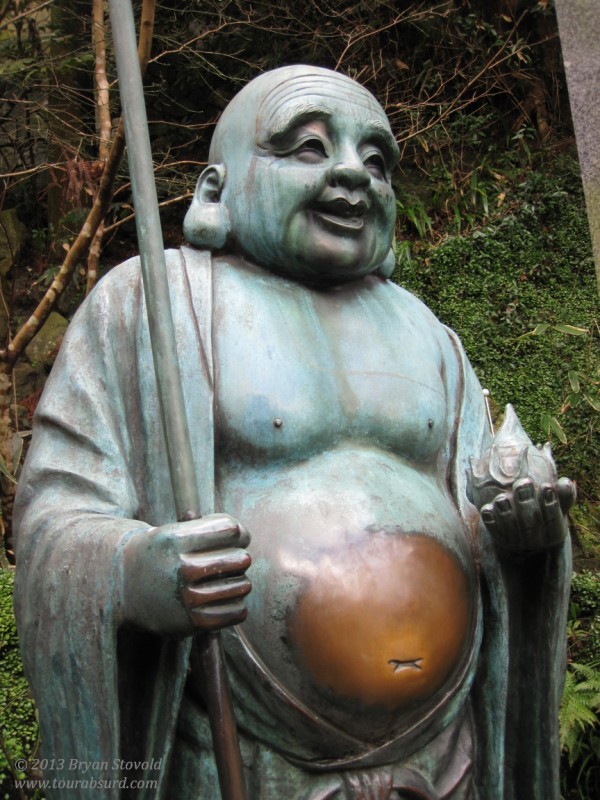 People rub this Buddha for good luck.  Judging by his belly, there’s a lot of lucky people out there.

For those who like nature and hiking, there is a long trail on the mountain and hikers are challenged to find each of over eighty special landmarks along the way.  For the rest of us, the shrine itself is full of winding trails with bridges and surprises and hundreds of statues that can fill a fun afternoon. 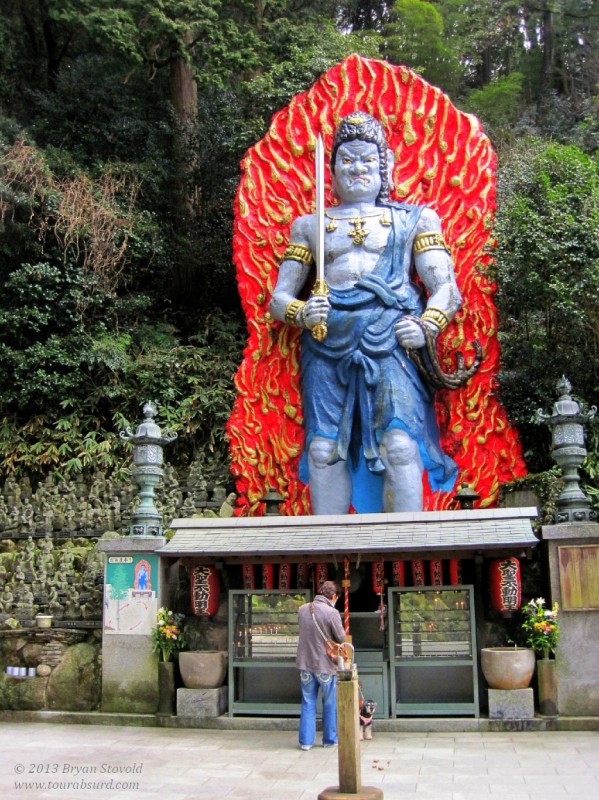 In my notes I wrote:  “Fudo Myo-o mean dude who surrenders evil spirits for people who don’t practice Buddhism.”  I was assured that he is actually a good guy.  And if you think he’s big, just wait! 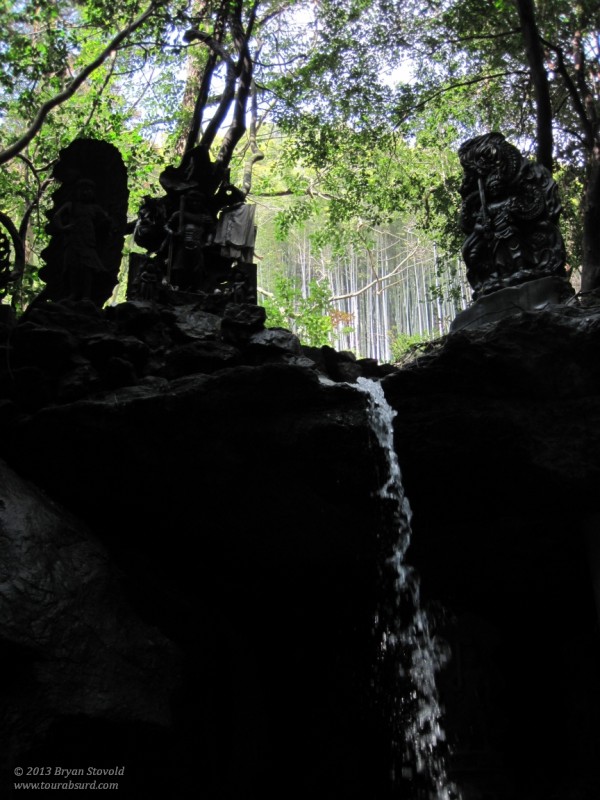 Threw this picture in to give an idea of the serene beauty of this place.
Behind the top of the waterfall you can see the giant bamboo on the mountain behind.

All of the winding paths eventually lead visitors upward to the highest part of the shrine and the biggest surprise is saved for last. The Shingon Sect of Buddhists, who operate this shrine, have created the largest bronze statue in the world.  The Sleeping Buddha is also the largest lying Buddha in the world, and it is stunning.  The green behemoth is 41 meters long, 11 meters high, weighs over 300 tons, and is roughly the size of a jumbo jet. 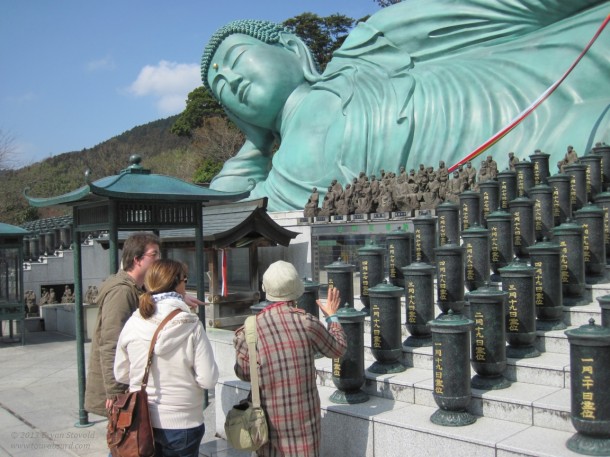 Size does matter.  This is the world’s largest prostrate Buddha and the largest bronze statue in the world. 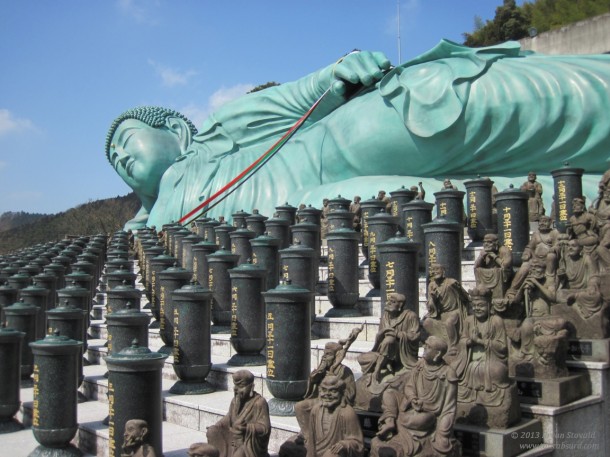 There are 365 urns in front of the Buddha.  Visitors travel long distances to place messages to their dearly departed loved ones in the urn marked with the day they died. 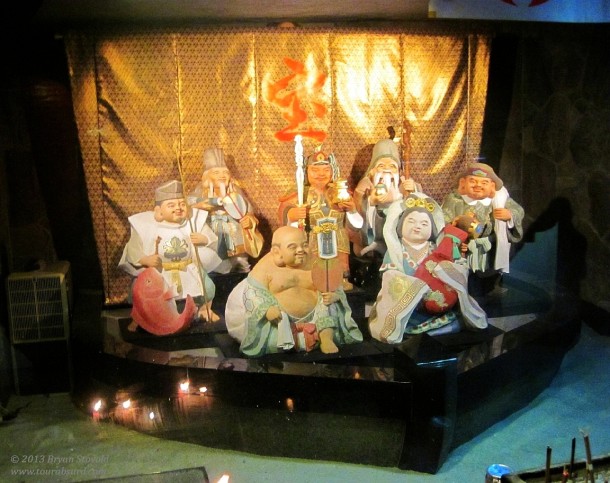 Behold, the Seven Gods of Fortune.

Now try to spot the one that also shows up on one of Japan’s finest beers. 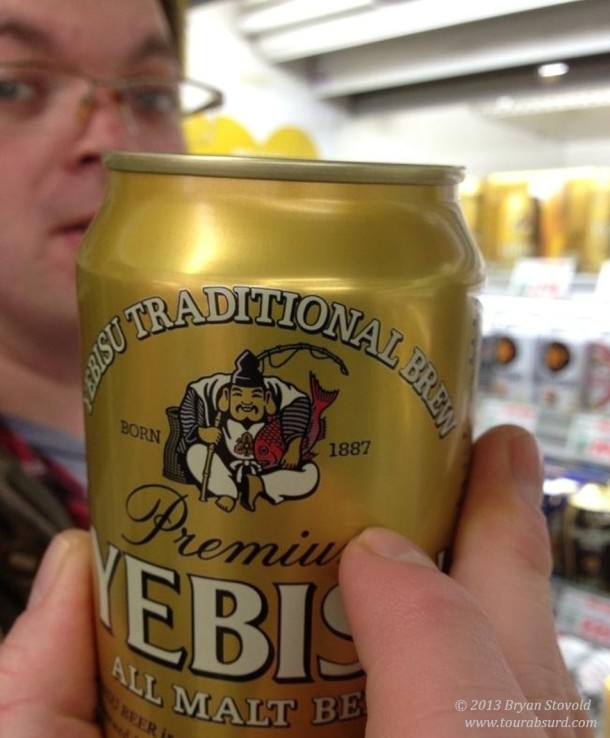 These are the important kinds of facts you will find only here.

Sasaguri, the charming little village that is home to the temple, is populated with small craft stores and restaurants that by themselves are worthy of the trip.

From the Hakata Station in Fukuoka, transfer to the Fukuhoku Yutaka Line.  The line travels east beyond Fukuoka through rice fields and into the mountains to the Kido-Nanzōin-mae Station at Sasagura.  The shrine is on the side of the mountain a few hundred yards from the station.

6 thoughts on “The Many Faces of Fukuoka’s Nanzoin Temple”