I love travel in its many, many forms.  When I am not out traipsing about the earth in search of new and funny adventures, I will often turn to other forms of travel: books, movies, following other travel bloggers, and playing my favorite MMORPG, World of Warcraft.  In this post, I compare and contrast WoW to RL (real life).

As you may already know, I used to work in the film business.  I believe at some point I was supposed to shed my naive enthusiasm for visiting film locations, but that never really happened.  Although my passion for a certain franchise did cool, in general I still really enjoy visiting spots that have been used as movie locations, that I’ve read about in a book, or even places I’ve seen on National Geographic specials (like Pompeii!).  Apparently the same holds true for pseudo-locations like those in video games, since I was giddy with excitement over visiting the Ngorongoro Crater in Tanzania.  Unsurprisingly, it turned out to be a lot different from its counterpart on Azeroth.

The maps are a remarkably good match.  The 3D topographic map at the Ngorongoro Conservation Area visitor’s center and the WoW map have similar colors and orientation.  Most visitors see the crater for the first time from the south rim in both worlds, if in slightly different spots.  Well done, Blizzard! 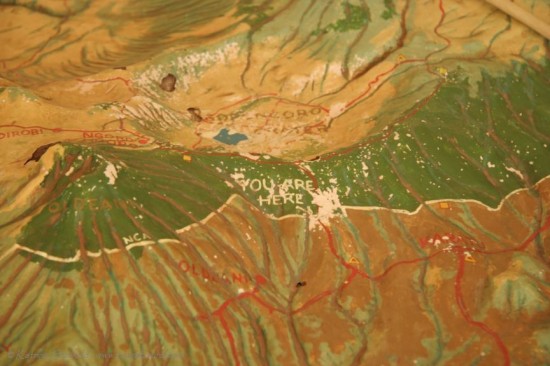 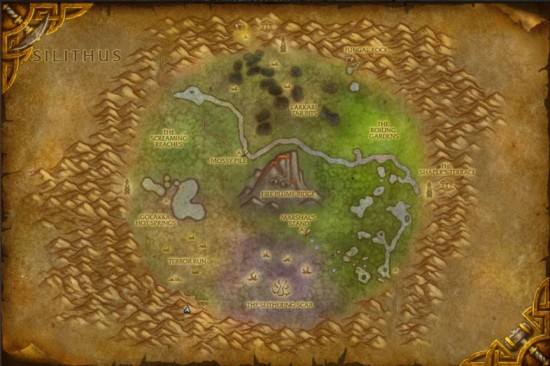 YOU ARE HERE. …ish.  (As with the rest of the pics, click to enlarge.)

Although the first view of the craters is from similar positions, the entrance and exits are flipped.  Now I’ve only been through Ngorongoro once, so I can’t swear to the fact that every tourist goes down the same road we did, but there are check-in and check-out points on the roads and they are one way, so I suspect the majority do.

As you can see, the drive down into Ngorongoro is made along the edge of the crater rim at a relatively gentle angle (it’s steeper than it looks) and with the center of the crater open to your left.  On Azeroth, on the other hand, you dive right in, heading straight for the heart.  Eventually the path curves into the wall, but only for a short time.  In Tanzania you enter from grassland with sparse trees where antelope, zebra, and giraffes roam; in Azeroth you enter from sandy desert filled with faux saguaro cacti where huge scorpids, serpents, and strange walking flowers lie in wait to eat you.

Close, but no potato. 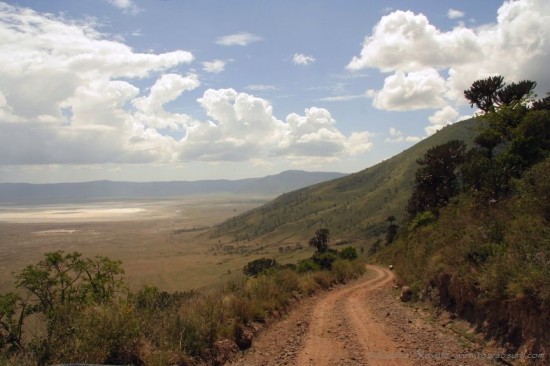 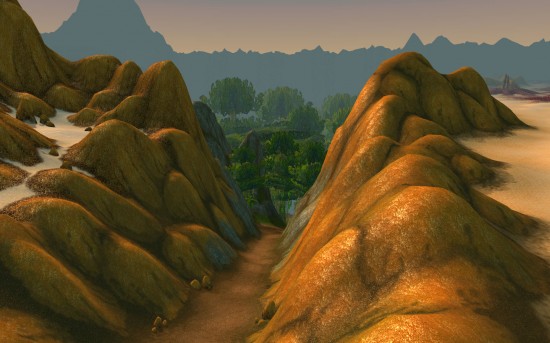 Road on left is much bUmPieR than it appears.

Both appear to be calderas formed by the collapse of land after a volcanic eruption.  Un’Goro seems to still have volcanic activity, including lava and fire elementals, whereas Ngorongoro Crater was formed 2-3 million years ago and is pretty darned quiet.  If you don’t count elephants trumpeting, lions roaring, and hyenas laughing, that is.  Check the top picture in this post to compare the relative smoothness of the real thing.

It’s cool, though, Blizz.  I totally dig volcanoes and lava, so I’m with you. 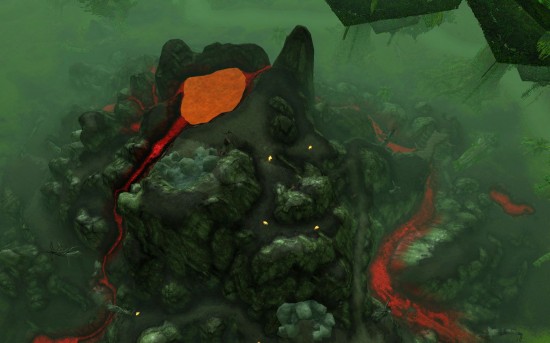 Unlike real life, you can stand in this lava and not die.

All throughout mainland Tanzania we saw the iconic acacia trees, many of which had weaver bird nests dangling from their limbs.  They fit with the dry climate of the savannas and, sucker that I am, put me in mind of The Lion King.  Un’Goro, on the other hand, has HUGE, primeval looking jungle giants with moss and vines and all kinds of dangly bits.  Only one nest that I could find, however, and it didn’t look friendly. 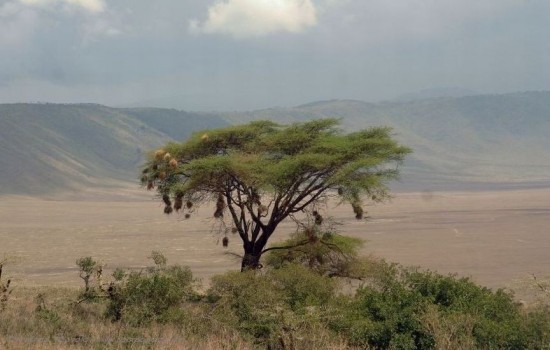 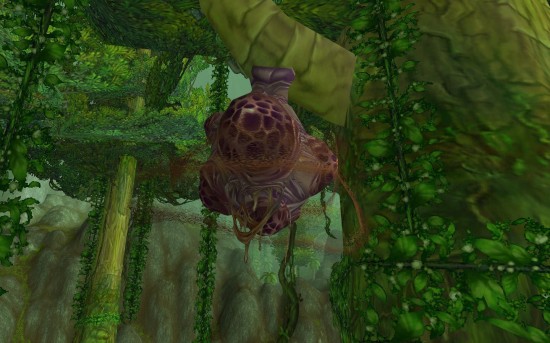 For most drinking spots in safari areas, there are critters in, around, and beneath the surface of the water.  On Azeroth, it’s the same: crocs, sharks, and fish with gnashy, gnashy teeth.  In Ngorongoro, there are birds around the water, frequent visits from all the land creatures, and hippopotami paddling about during daylight hours (they come on land at night to feed).

If you’re thinking, “Aww, hippos!  How cute!” then you have a thing or three to learn about hippos.  They are responsible for the second largest number of animal-related deaths in East Africa.  They are fiercely protective of their young, aggressive, and move with surprising swiftness.  They are only cuddly in bedtime stories.  (And probably not even then, if you grew up in East Africa.)

The number one most deadly critter?  The mosquito. 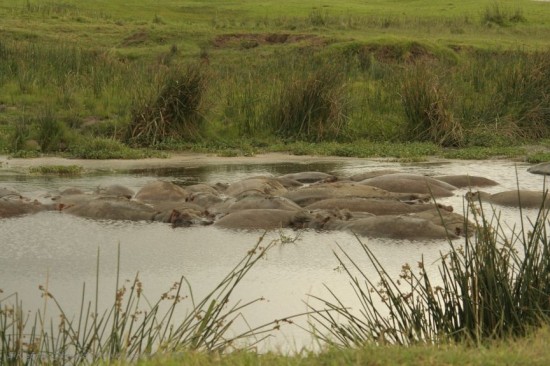 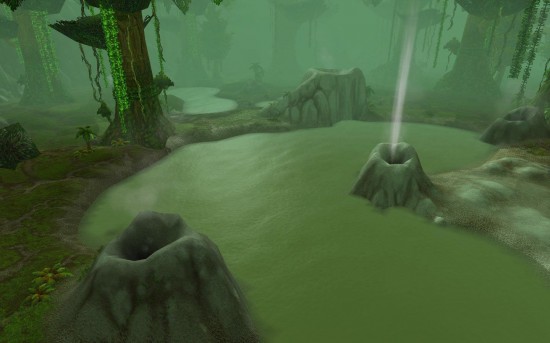 There are nifty geysers around some of the watering holes in Un’Goro, but oddly, the water is one of the safest areas in the crater.  Nary a bitey fish in sight.  I even went underwater to take some photos and– DEAR GODS, WHAT IS THAT THING!? 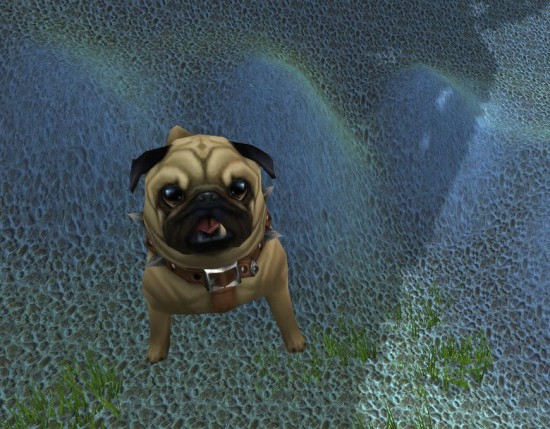 Sure it’s cute. Until it scootches its butt on the floor and ruins your Persian rug.

Oh, it’s just my pet pug.  My bad.  Still, even with the killer pug, I think Azeroth’s waters are more friendly.

No, I am not referring to teenagers.  (In that case, “horned” is not the word you seek.)  I am talking about rhinos and dinos.  Ngorongoro is home to a very small portion of the world’s shrinking population of endangered Black Rhinoceros, around 12-14 of them.  We were extremely fortunate to see 3 on our visit.  Un’Goro, on the other hand, is home to “stegodons”, dinosaur-esque critters that spawn repeatedly in endless supply.  (If only the rangers in Tanzania could apply the Warcraft algorithm to their breeding herds of black rhinos.)

I’m going with Africa on this one, if only because this is one of my most favorite photos of all time. 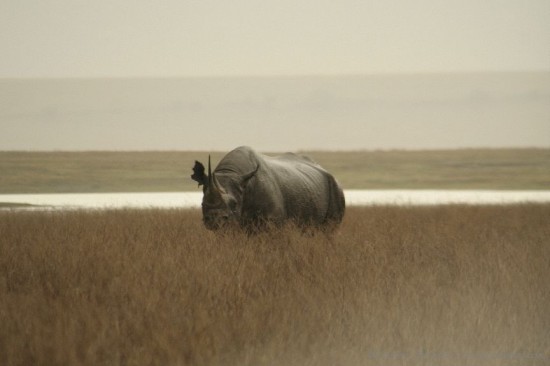 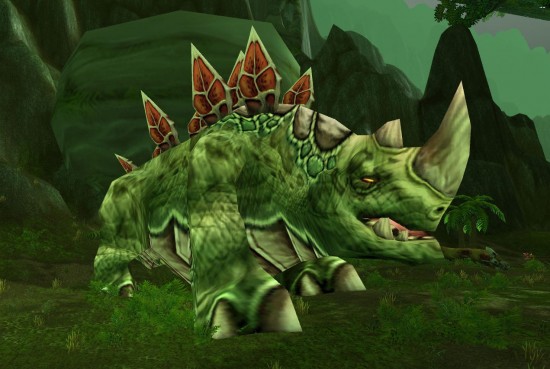 Short-sighted but benign rhino on the left, clear-visioned but mean pretend dino on the right.

Skeletal remains don’t seem to last too long IRL (“in real life”) in Tanzania.  Well, that is to say, juicy animal remains.  In nearby Oldupai Gorge (misnamed “Olduvai” by some German guy with bad hearing), there are human-ish remains that are, oh, 3 million years old or thereabouts.  So really, it’s the luck of the draw.  If you are a pre-historic hominid with friends and stabby tools, your remains could last a long time under the right circumstances.

If, however, you happen to be a tasty gazelle or a Cape Buffalo with a bum knee, your remains aren’t likely to stick around for long.  The meat will go first, probably to lions and hyena, the nastier smelly bits will be fought over by vultures and smaller carnivores, and most of your bones will be cracked open for the marrow.  If you happen to have a nice set of horns, those might stick around for a bit, since they aren’t especially flavorful or nutritious.

In the gaming world, you would turn into tar.  *POOF!*  Yes, just like that.  I mean, you might get lucky and turn into a quest carcass where adventurers have to come hack off a sample of your rotting meat to tempt a predator out of hiding or something, but most likely you’d just turn into bubbling tar.  No surprise that Blizzard’s headquarters are within driving distance of La Brea.

I’m not sure if either one of these is preferable.  Um, pass? 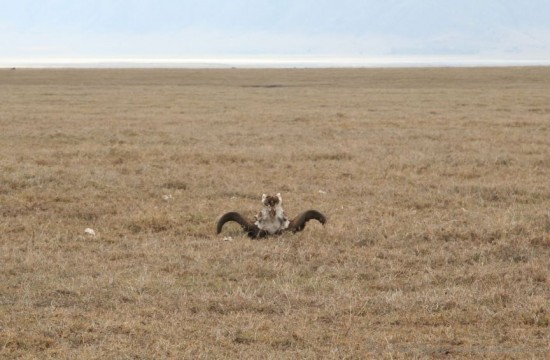 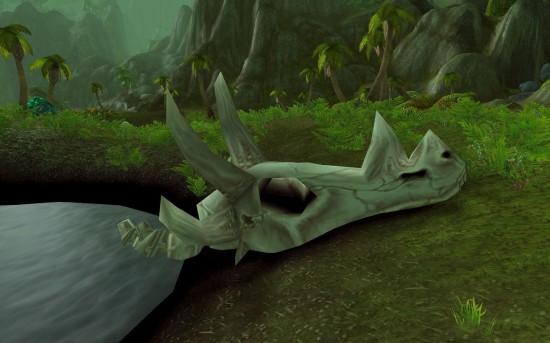 Things That Live In Holes

Gracious, we’ve gone from horned beings to bones to things that live in holes.  Would you believe me if I told you no innuendo was intended?  No?  That’s probably a wise choice.

Hyenas, like many canines (their behavioral cousins, though they are more closely related to felines and viverrids), like to dig holes.  In addition to being a cooler place to hang out than in the direct sun, the dens also provide protection for the cute lil’ hyena cubs.  And yes, they ARE cute.

In the looking glass world of WoW, the hole-dwelling beings are bugs: big, nasty, mean, tear-your-arm-off-and-pick-their-mandibles-with-it bugs.  They are part of an overall plot point that hints at a terrifying nightmare of world infestation.  Indeed, when a character graduates to the next zone, Silithus, they are confronted by a desert wasteland filled with nothing but bugs.

I usually skip that zone.

I think if I showed up with a bunch of steak, or maybe with enough bones from the above section, I could become friend with the hyenas.  Besides, they are fuzzy.  I vote RL on this one. 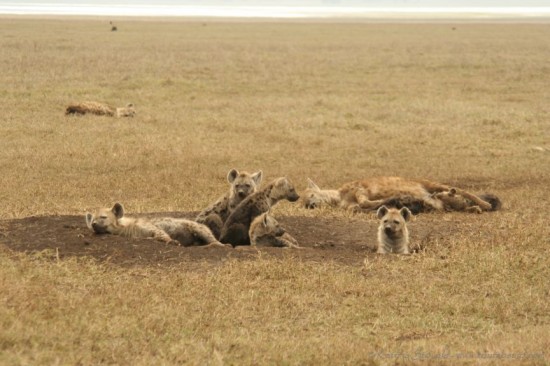 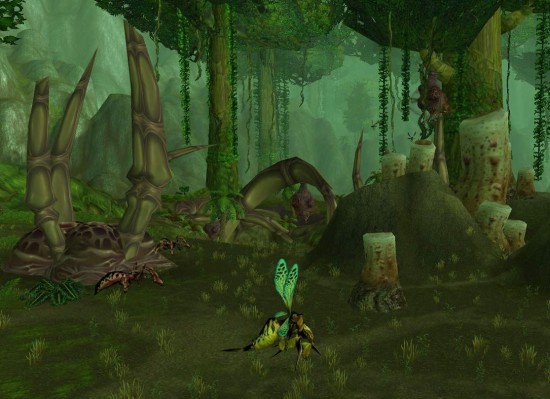 All right, because I’m proud of you for reading this far, and because hyenas are freakin’ kickass, here is a picture of a cub.  I know you think it’s adorable, so don’t even lie. 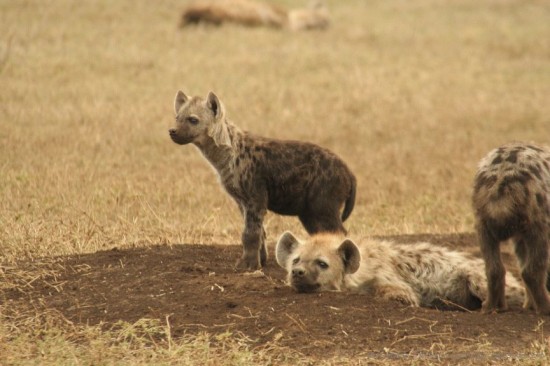 Goodness, look at the size of those paws.  Mud all over the furniture, I tells ya!

I had once planned to make this a two parter, but life got in the way. Until my next trip to Tanzania, this is probably all there will be. But one of my other favourite posts (you can tell I’m editing this in The Future because of the spelling. I’ve been in Ireland for many years now!) about fictional places is Hamunaptra, the City of the Dead from 1999’s The Mummy. Managed to find it in Morocco! Until next time, happy travels, all!

Have you ever wanted to visit a fictional destination?