Scattered around Cork are various elements marking historical events throughout the ages.  The juxtaposition of ancient and contemporary is one of the things I love most about living in Europe.  Now centuries old pubs not only have historical stone and brickwork, but running water (hallelujah!) and wifi, as well.  On Barrack Street in Cork you can find automobiles, neon pub signs, a garda station, and a centuries old star fort.  …You know, just something you pass on your way to the grocery store. 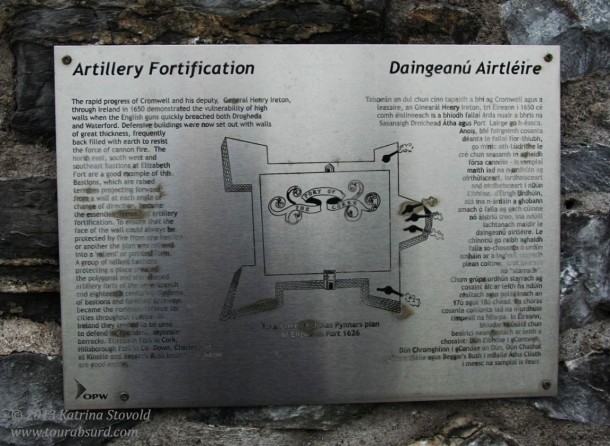 Not everyone who lives in the city remembers where Elizabeth Fort is.  Even for folks in the neighborhood, it's hard to get a sense of the scale and shape of the thing when simply meandering past.  This helpful panel inside the fort lays it out quite clearly: it's Gamera. 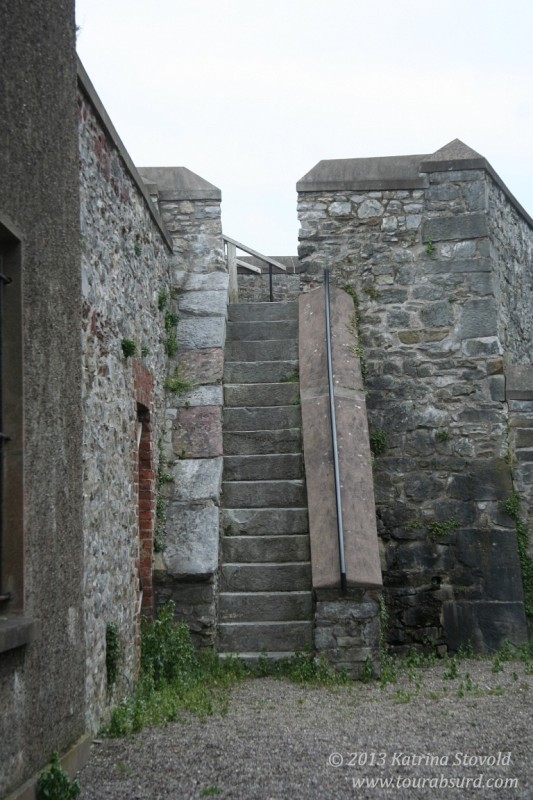 My pal, Emily, and I have been to the accessible parts of the fort several times.  Heck, she only lives a few blocks away!  But neither of us had been up on the walls.  There were clearly stairs and walkways with access, but the entries were always locked. 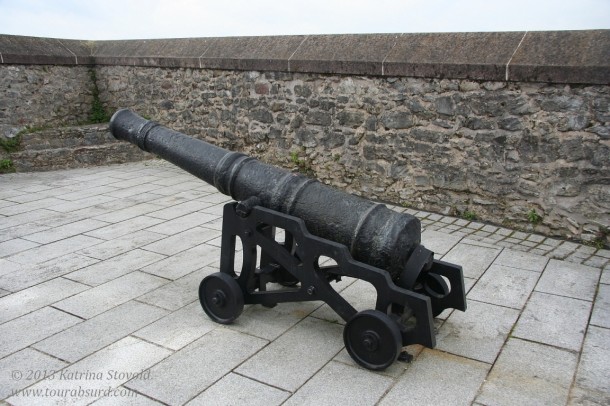 Very little of what is said here should be taken as canonical.  …bah dah BING!

No, this isn't a breaking and entering story, though I admit the idea is tempting.  We would be foolish to turn a crime into a blog post, but it wouldn't be the first time.  Alas, nothing so sordid!  We just happened into the tourism information office on the right day.  There we met Sean, who was wrapping up an internship and who also had the keys to the fort. 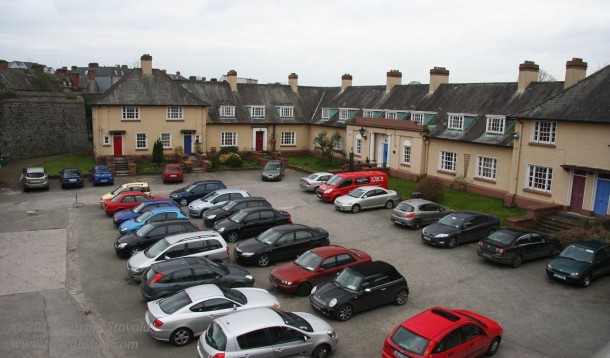 It's currently housing a garda (police) station, but that is meant to relocate.  I think it was supposed to have already moved, but hey, that's the pace of island life.  It will happen when it happens. 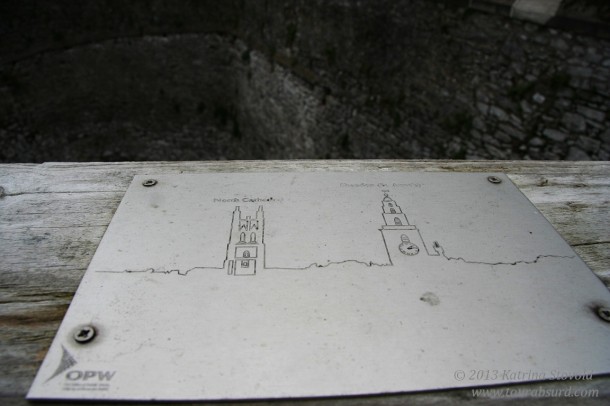 In anticipation of the premises being vacated, the Office of Public Works and the Cork City Council installed helpful panels, handrails, and wooden walkways.  The hope is that Elizabeth Fort will be a tourism magnet. 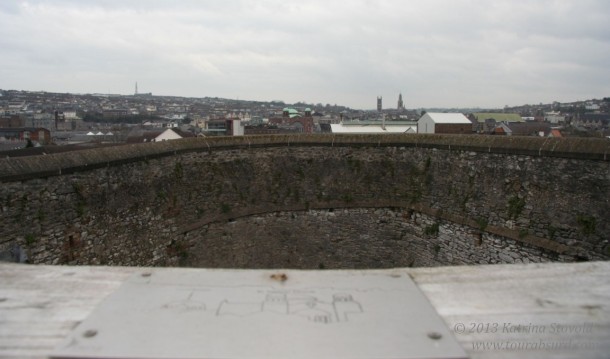 Can you match up the nobby bits?

While it's fun to have this overlook of my beloved city, and to finally get a sense of how well positioned the fort really is, not every view is breathtaking. 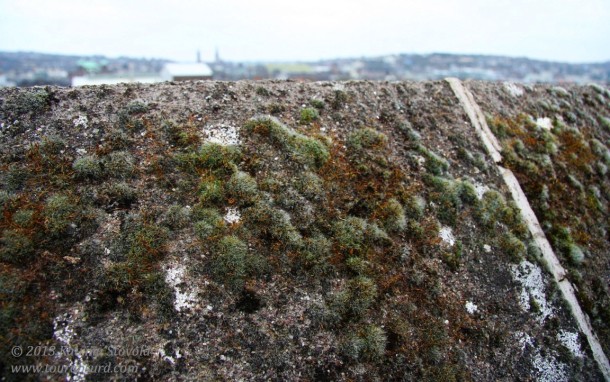 Fuzzy on the details.

You already know that I occasionally get distracted by wee, growing things on the walls.  Sometimes this is unfortunate and means I miss out on a stunning overlook.  At other times, as when gazing over the back side of a brewery that's being dismantled (as was the case from one side of the fort), it's a good thing.  Really, the moss is much more scenic. 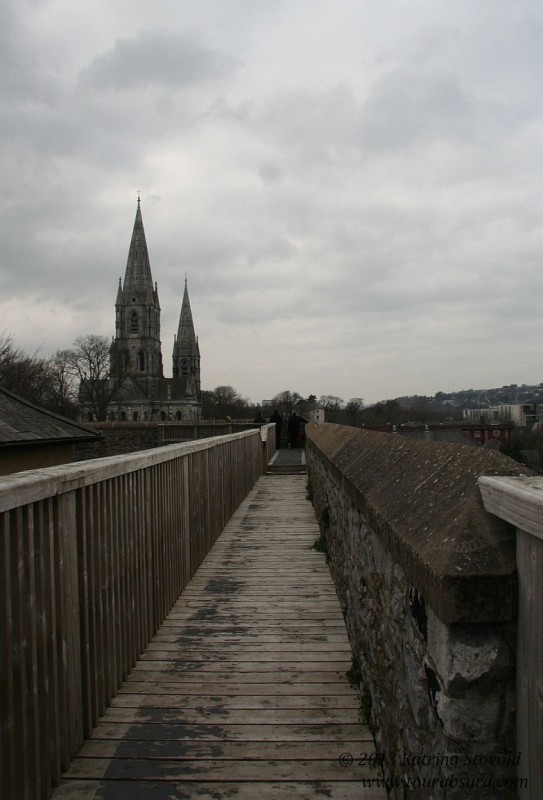 Heading for the pointy bits.

Views of St. Finbarre's Cathedral, however, never fail to impress.  And they kept getting better. 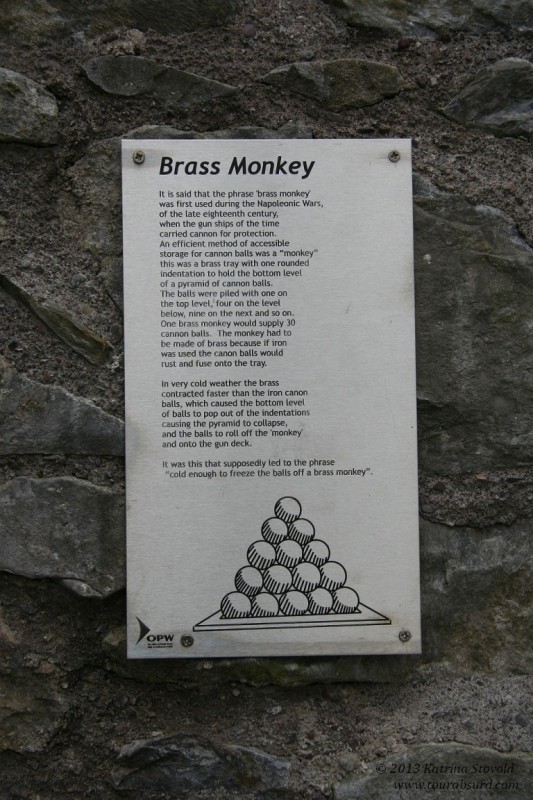 Now you can talk about cold balls with no embarrassment.

But first a quick pit stop to learn that the subject of the famous Beastie Boys song was much more than a cocktail.  In typically Irish fashion, there is a quote at the end that'll make you laugh and possibly blush: 'It was this that supposedly led to the phrase "cold enough to freeze the balls off a brass monkey".' 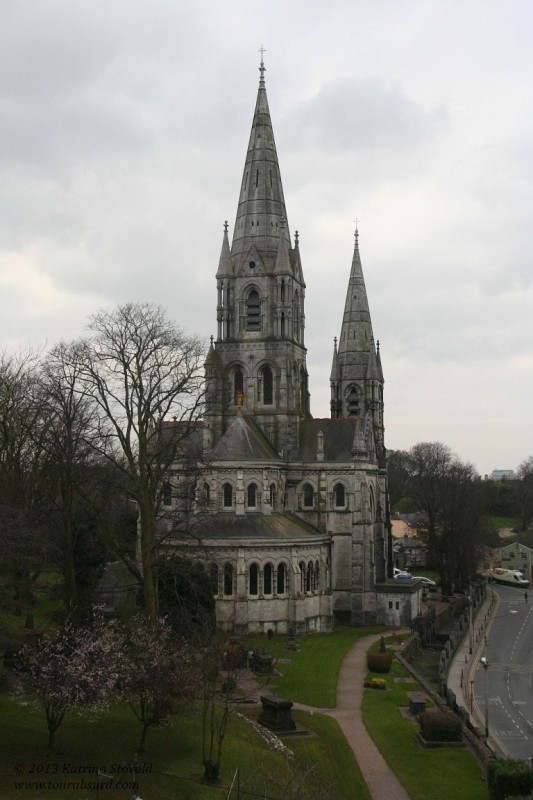 *tears up, grabs a tissue*

I'm not much for religious imagery, but I am mighty pleased to have taken this photo.  St. Finbarre's Cathedral never looked so pretty before.  Lovely architecture, adorable blossoming trees, that famous Irish green…  Whattaview! 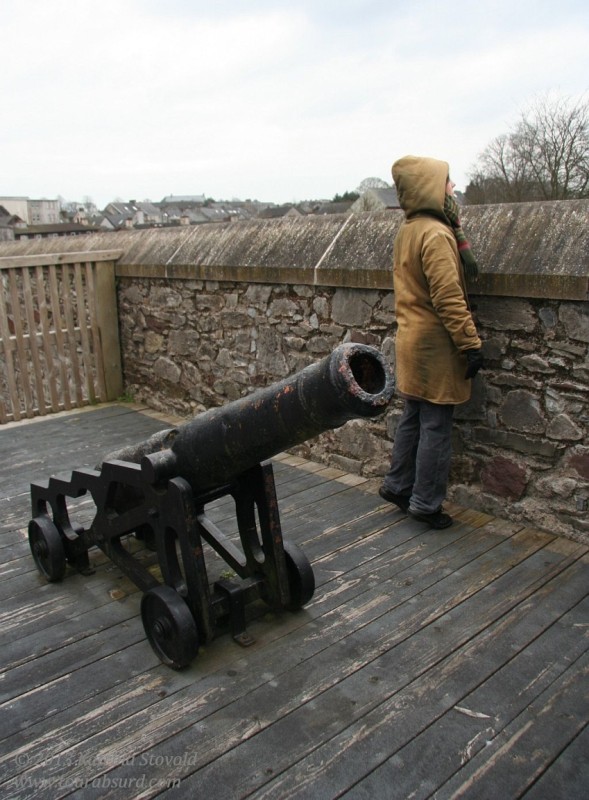 Obtaining such a view was not without its perils, however.  Not only are the walls unfriendly to those of us with petite builds, but rogue canons have been known to sneak up behind people and threaten to shoot them in the tuchus.  Thankfully, I had learned a bit about the Irish panto tradition last year and shouted a warning, thus preserving Emily's ability to sit comfortably for many years to come. 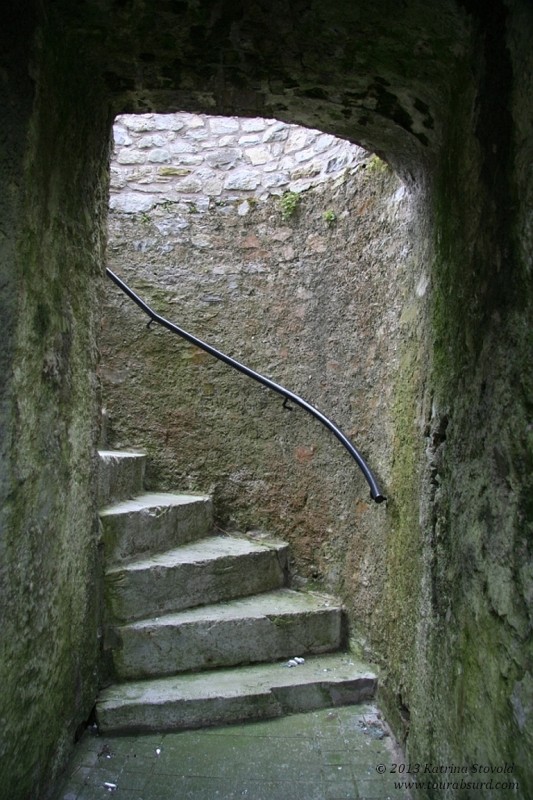 The many and varied stairs make this a poor choice for anyone with bad knees.  Still, the steps and greenery are picturesque.  We continued our journey up to… 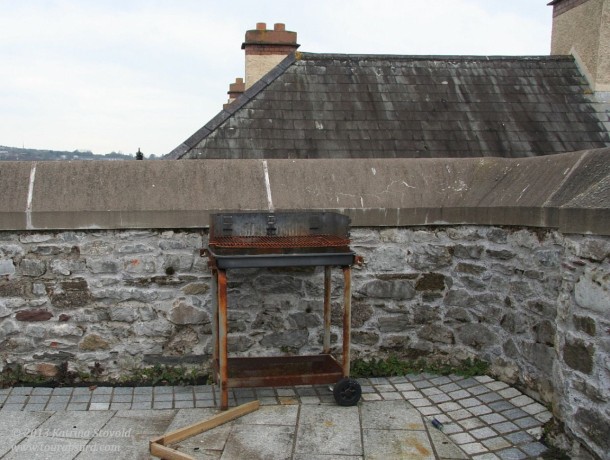 And me without a spatula.

…the BBQ patio!  Who knew that Elizabethans were into steaks and burgers?  Well, had to have something to go along with all that papist stomping and ale quaffing, I suppose. 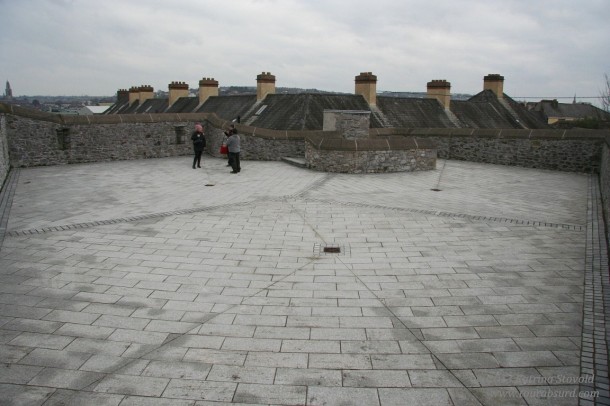 It really could use some benches and a few potted plants to brighten up the place.  Folding umbrellas would be nice, too.  Pretty nice dance floor, though.  You know how crazy people get with their madrigals and just need to get their groove on. 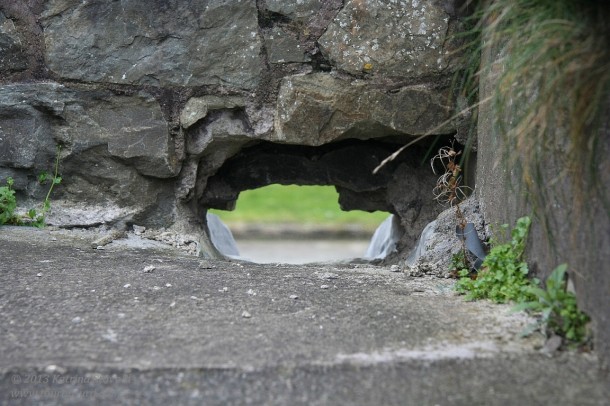 Did they have hoses back then?

Handy drainage holes make cleaning up after your Defending the City Party a snap! 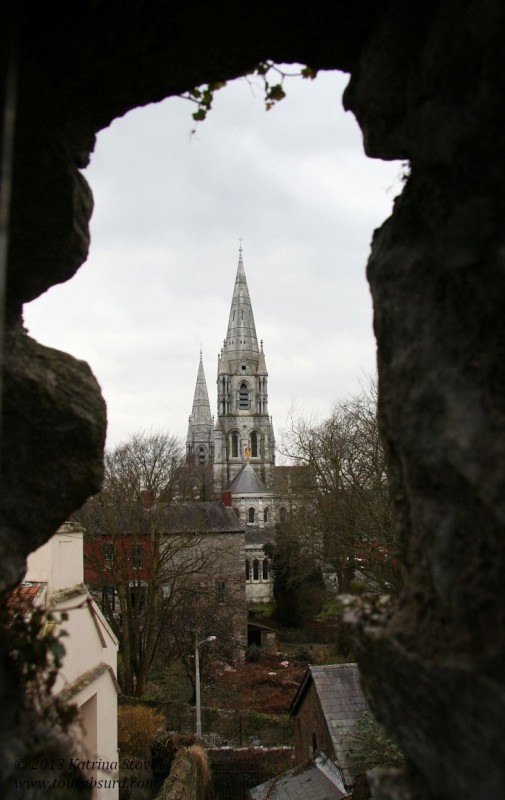 And finally, one more view of St. Finbarre's.

To be fair, there is a lot more to Elizabeth Fort than scenic vistas and dance parties.  Sean, our guide, was busy telling a couple visiting from the UK all about the history of the place and the important role it played in Cork's history.  For instance, the people of the city once rose up against their British oppressors and destroyed the fort (ironic that an Irishman was telling this to Englishmen, no?), but were beaten back into submission and forced to rebuild it themselves.  Oh, the humiliation!

I've heard variations on the stories of local battles so many times that it's all getting a bit mush, I'm afraid.  After living in Cork for some time now, I was much more excited about simply being allowed up on the walls.  It was an item on my list of local things to accomplish.  I've already visited the Butter Museum, so that's two items.  I've braved the wrath of the notoriously cranky pub owner at the Hi-B – three items.  Naturally, I've kissed the Blarney Stone – four.  Hmm…  I suppose I really should get to annoying the neighbors across the river in Shandon and ring the bells of St. Anne.  A lovely little number by AC/DC comes to mind…

The fort is not fully open to random passersby.  You can stroll into the courtyard and see some of the old canons (keep an eye on them – they are sneaky!), but you can't get up on the walls just yet.  If you want to take in the view from on high, contact the Tourism Office on Grand Parade to see if they've got the key handy.  If they don't, they should be able to track it down, but give them notice.  This is Ireland, after all.

What madcappery have you been up to lately?

8 thoughts on “Fun photo essay: a visit to Elizabeth Fort”