Today's post is by Linda of IslandMomma: Life on a Small Island and Beyond.  It showcases one of the best things about travel: taking the road less traveled.

In the spirit of TourAbsurd I have to tell you that Katrina would have loved the unexpected turn my day took last spring. Brought a smile to her face it would have!

My friend, Maria, and I had gotten ourselves out of bed early to catch the light, and it turned out to be one of those crystal clear days which make you glad you made the effort. We live on Tenerife in the Canary Islands, and we'd made our way up from the coast to the  village of Granadilla de Abona. Leaving the tourist  fleshpots  behind we spent an almost lazy morning, photographing some floral art from a recent local festival. It was Saturday-morning quiet in the little village, and we enjoyed it a lot. 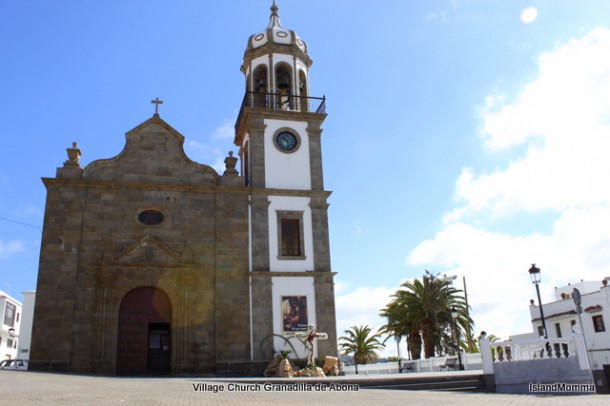 A few days previously I'd driven over the bridge which spans the spectacular Barranco Orchilla, and I wanted to go take a closer look. So we took the high road, the one which curves around the south's hillsides instead of blasting through them as the autopista does, and began to return south.

Despite two, desperately dry, rainless years the barranco (ravine) was still impressive as we drove over the bridge, on its steep, rocky sides hardy cacti and other scraps of greenery were eeking out survival, and from where we were perched on one side we couldn't even see down to the ravine floor. In the other direction, it was less dramatic, the floor wider and the sides less steep as it made its way to the island's east coast, where at some point it meets the ocean. 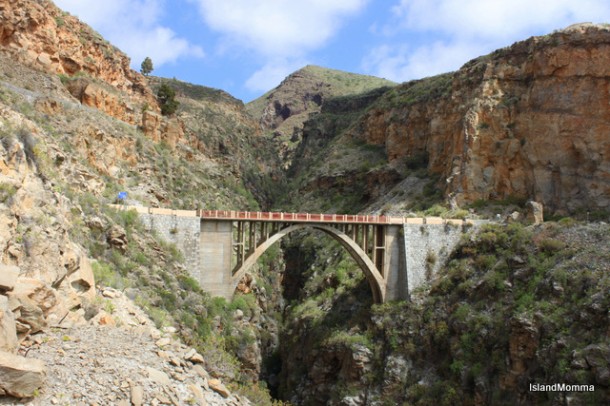 The day was wearing on, and we decided to head off for the coast to brunch, when our day took a suprising turn. Returning to the car which we'd left parked by the roadside we noticed a sign which we'd missed on arrival, just the one word, Queseria, and an arrow pointing back in the rough direction from which we'd just returned, a dirt path, not really that suitable for traffic. A queseria is a place which makes cheese, and clearly it wasn't some stainless steel factory, but a small, artesan-style operation. Tenerife's goats'cheeses are nothing short of heavenly and so, curiosty piqued, we decided to explore a bit further, and to take the car, since there was no indication of how far it was.

We bumped  cautiously along the road until we came to a ramshackle cottage. Step off the beaten path in Tenerife and sometimes it resembles the Beverly Hillbillies. Nothing to indicate it was our destination, so we hailed a couple of men working on a nearby patch of earth. They seemed to be attempting to prepare it for planting something or other, but most places in the world it would have been written off as not worth the effort, so dry and rocky was the ground.

Our request for directions was met with a frown at first, and it crossed my mind that the sign was for somewhere now closed down. Then the light dawned, as if remembering some unforgotten fact,one of the guys nodded and indicated we should continue a bit further along the road. Quite what his confusion had been it's hard to say, since another 30 seconds and we were there, so close was it. 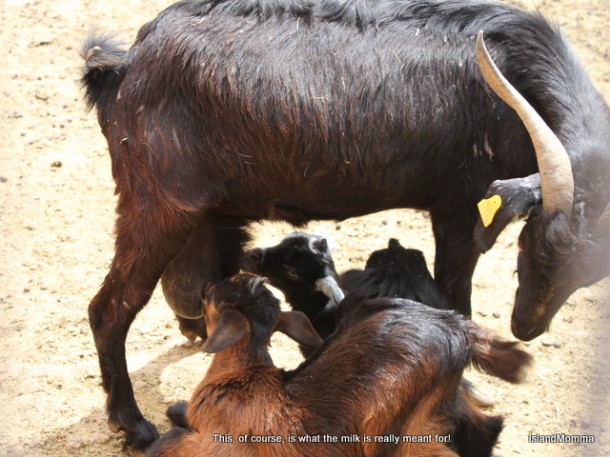 The scene we found took me back to my childhood when my grandad had a market garden in the north of England, a small, untidy farmyard, with scrap metal and planks of wood stacked along crumbing walls. I know that complusion, my grandfather had it too, never throw away anything which might be useful in the future. A dusty dog wagged his tail at us, and a couple of baby goats gazed sleepily from a corner.

We'd only been there seconds when a mini tractor chugged around a corner, and we explained to the young man driving it we'd like to buy some fresh cheese. He went off in search of the boss, and we took in some more of the scene. Adjoining the yard was a large pen where countless goats bleated and frolicked, yes, I do think frolick is the right word, a bit poetic maybe, but entirely suitable for what they were about. 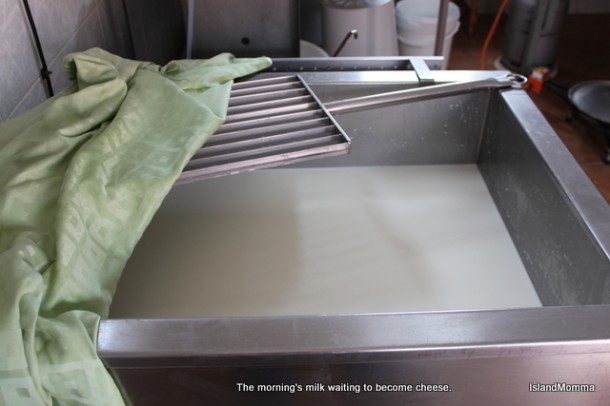 The young man reappeared with his boss, who rubbed his chin in a puzzled way. “OK, I get it – they aren't used to foreign, middle-aged women (Maria is Spanish, a worse sin around here somtimes than being English or German) wandering about these parts.”  But it turned out that he was puzzled because it was market day and his entire production had gone off that morning to the Saturday market in San Miguel, but, “Come on, let's see if there's any left.” We dutifully followed him to a cool outbuilding where he showed us that morning's milk waiting to be turned into cheese, and opened an even cooler one to reveal, joy of joy, fresh, white, round cheeses neatly waiting for us. 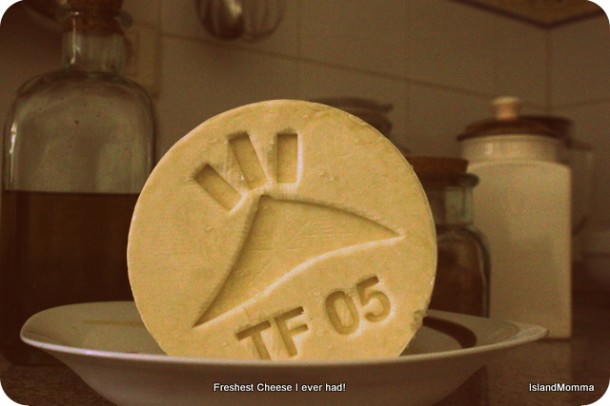 I think he saw how easily pleased we are, because he got quite chatty after that, especially when I asked him if modern EU regulations have interfered with the traditional production of his cheese. The answer is yes, but not, in all honesty, that much – and, believe me, you don't want to know about the traditional method. He wrapped up our cheese and money crossed palms, and we wandered outside, him still taking animatedly about his work.

As we passed the goat pen he stopped and explained more about how the goats were reared and kept, and let us in to admire them …. and, of course, take snaps. Then it was time for their feed as the little tractor chugged back laden with hay, and the bleating and frolicking turned up a notch. 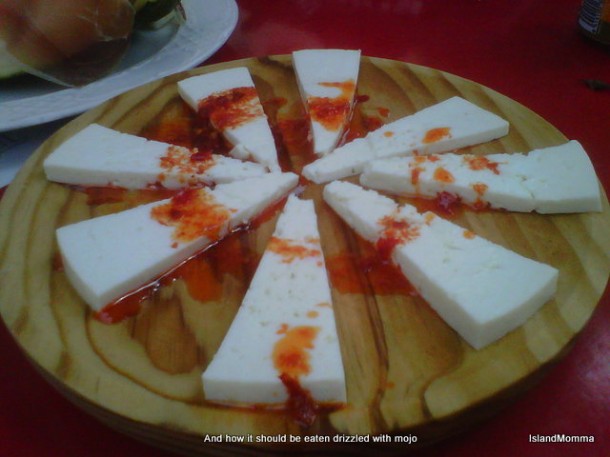 It was our cue to leave, hugging our cheese and laughing as we negotiated the track back up to the main road… We'd spent time in another world, as far removed from the resorts on the coast as you could imagine within the boundaries of Europe, and I couldn't helped wondering if I took photos from the day to someone lazing by a pool down there – would they have believed it was the same island?

Where has the road less traveled taken you?

Linda's website is IslandMomma: Life on a Small Island and Beyond.  She writes for several Tenerife-based travel websites and just took on a regular assignment for The Spain Scoop.  You can follow her adventures on Facebook and Twitter.

When I visited Linda on Tenerife, she introduced me to beautiful sights and delicious foods – and of course, great company!  Soon we will be meeting up again in London, where we'll be staying in a fab apartment in a trendy area of Hackney.  I'll be writing more about that soon!  In the meantime, if you're interested in booking accommodation in the Canaries, there are gorgeous holiday homes on offer through HomeAway.co.uk.  Do give them a peek – you'll be inspired to pack your bag and set off right away!

10 thoughts on “Tenerife and the Secret Road to Cheese”