I have written about the stealth mission of this blog before, but I don't know if I've spelled it out in crystal clear language.  In short, it's about making the world a better place and doing my part to bring more peace.

How does this fit in with humor and travel?

By breaking down barriers, by creating common ground for understanding,
and by planting seed thoughts in our collective consciousness.

"Through my travel experiences, as well as being a member of Couchsurfing.org, I have come to see more and more of the good in people.  For all of the 'strangers' I have invited into my house, the vast majority have been delightful, upbeat people who are out to improve themselves and the world.  Likewise, the majority of the folks I have met while traveling have also been cheerful, helpful people who are simply living their lives in the best way they know how.

By posting pictures and stories of the things I have experienced overseas, I really want to contribute to peoples' relationship to the rest of the citizens of the world.  If you see that all the head-shaking silliness of marketing is a global phenomenon rather than a national one, for example, you just may chuckle and begin to realize that we are all in this together.  'This' being life."

As an example, no matter how objective and balanced I believe I am, it is very difficult to escape the deluge of fearmedia that assaults the average American — or probably anyone else who keeps up with the "news" in any language.  Even though I knew that the xenophobic propaganda being fed to us about other-countries-out-to-kill-us-all was a bunch of bunk, I did not have a lot of positive filler to counteract the effects.

Only by actually going and meeting people from different cultures, and in different parts of the globe, did I experience the diverse and wonderfully warm aspects of humanity.

I will admit that visiting countries about which I was quite ignorant sometimes filled me not with trepidation, but stereotyping.  I was surprised and disappointed at how much labeling was ready to come out of my mouth.

Rather than torture myself about it, I decided to bring it into the light and create smiles.  We all have our awkwardness and childlike assumptions, so why not use that power for good?  When we realize that people everywhere have the same tendencies, that fact alone gives us something over which to come together and laugh.  So I laugh over the gaps in my knowledge, the pop culture answers that fill in those gaps, and share the discoveries with my readers. 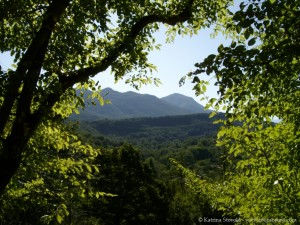 When we realize there is no shame in being who we are,
and that there is a lot to be gained through increased understanding,
the realization that we are all connected begins to set in.

It may be a bit of a convoluted path, but simply telling people that world peace and understanding are good ideas only goes so far.  Engaging the imagination and touching the heart has a far greater effect than feeding concepts to the intellect.

One of my proudest moments as a blogger occurred shortly after my return from visiting Morocco.  I traveled with a fellow member of the Couchsurfing community, a Moroccan national, who became a dear, dear friend.  After posting my second story about my travels, a reader commented, "I am already becoming fond of Rachid."  Wow.  Through my words, she felt a connection with someone she'd never met, in a culture she'd never experienced, recognizing not only his humanity, but his warmth.  Mission accomplished.

My way is but one of many, even for me.  I created this page because I was inspired by the Peace Innovation project at Stanford.  I also support various charities and bringing about changes to the monetary system.  Every tiny bit of change makes a difference.  I am grateful for technology like the internet and social media for connecting so many of us together and raising our collective awareness.  Peace is possible.