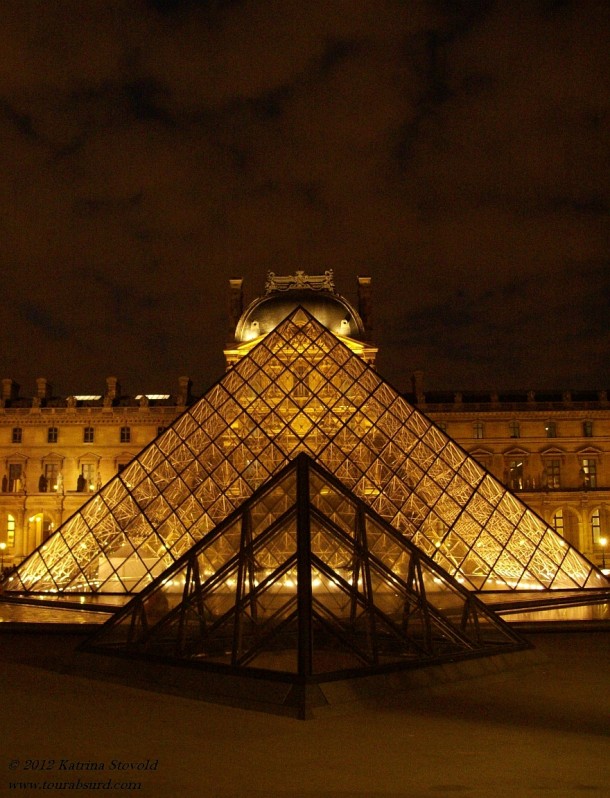 I loooove the Louvre!

Paris in June is warm, humid, and full of enough wonders to keep a visitor occupied for a lifetime.  Add nighttime to the mix and you get sultry (thank you Throw Momma from the Train) with a hint of mischief.  And perhaps some Dr. Seuss.

One summer I was wandering around with a friend, taking in the scenery during a less crowded time of day.  We were staying near the Opera, but after a massive sushi dinner, managed to walk along the Seine to see both Notre Dame and the Louvre at night.  We lost track of time (hence the Dr. Seuss quote) but enjoyed every minute of it.  We meandered around the grounds of the Louvre for quite a while, using our small point and shoot cameras to get interesting angles and glittering reflections of glass and water.

Results were mixed, as we discovered the next day.  Things often look much better on the little LCD display than when viewed full sized later.  I do like this photo, though, with the odd orange clouds marbling the sky, and the symmetry.

Although it is sometimes possible to tour inside the Louvre at night, we restricted ourselves to the exterior.  It was quiet and we felt like we'd unearthed a secret, almost like we were getting away with being there.  Haha, two Americans on a stealth mission to absorb culture via osmosis!  We so clever.

It's one of my fondest memories of Paris. We saw a side of the city that, while not unknown to other tourists, made it feel like ours.  It has made me much more willing, even eager, to explore outside of the usual hours of tourism activity.  Highly recommended.

What have you discovered
outside of business hours on your travels?

2 thoughts on “The Louvre at Night”