When people think of Italy, inevitably one of the first subjects to come up is the food.  It's a year 'round event here, to be sure, but holidays bring an extra level of showmanship to the table.  Natale (Christmas) is one of the biggest eating holidays of all – it lasts 2 or 3 days! 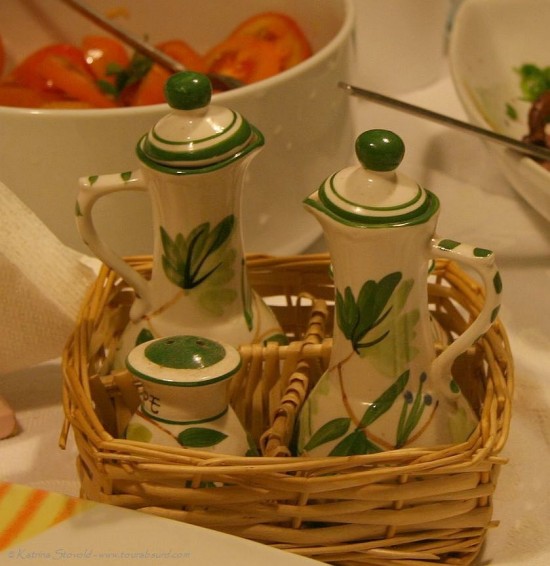 Many Italian families save the big meal for the actual day of December 25th.  Dario's family, much like my mom's family in the US, moved the first big meal and the opening of presents to the night of the 24th.  For my family the decision was fairly logical, in that it allowed my mom and her 5 sisters to have a gathering, meal, and gift exchange at the grandparents' house, while still having present opening and meals of choice on the home turf.

Dario says he doesn't know how they got into the habit of having a big meal on the 24th.  The gift giving is a natural extension of dinner, since everyone's up until midnight anyway.  It's more like opening presents really early on the 25th.  It's nice, though, as it allows Christmas day to be dedicated solely to enjoyment of family time.  Despite missing 5 members of the family this year, those present managed to enjoy the heck out of it! 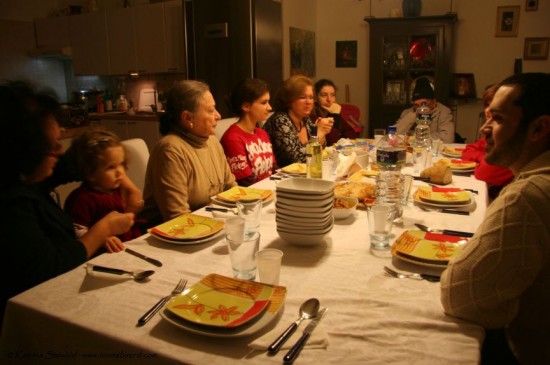 Getting ready for round one.  (That's our niece getting endlessly spoiled by her nonna on the left. ;)

Back in the US, both Thanksgiving and Christmas Eve dinners were generally comprised of turkey, stuffing, cranberry sauce, potatoes, etc.  We always had tortillas, too, if not frijoles, since half the family is Mexican.  (Sometimes we'd get lucky and there would be tamales or enchiladas.)  Somehow ham never really entered into the picture.  And despite being a family that had grown up scuba diving and surfing, the idea of seafood during the holidays was quite laughable.  For me, all that has changed. 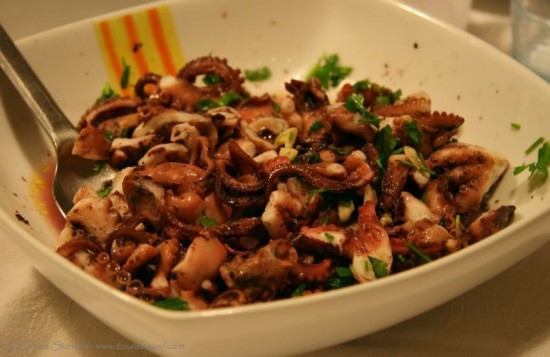 Although Dario's parents and sister now live in Rome, they are originally from Naples.  Neapolitans LOVE their seafood!  We had octopus salad and stuffed squid for the first course, pasta with mussels for the second, and fried fish for the third.  (And that's not even counting all the side dishes of pizza, greens, peppers, tomatoes, and bread!)  I maxed out after the second course and started slipping into a food coma – no turkey required! 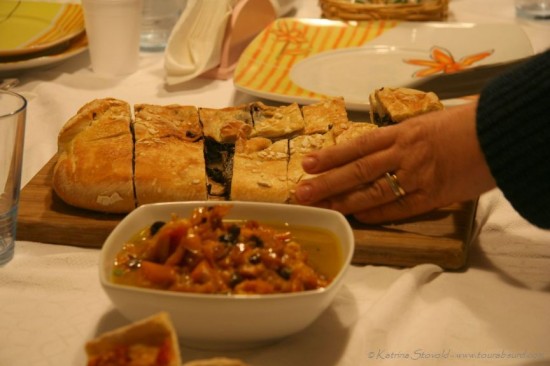 Mamma cuts pizza di scarola, with peperoni in oil in the foreground.

Incidentally, do you know that Americans have the term "pepperoni" all wrong?  It's not sausage – it's peppers.  We even spell it incorrectly!  What we think of as pepperoni is really salame (not even "salami" – that's two or more).  I have heard more than one tale of an Italian going to the US, or an American coming to Italy, and getting in quite a muddle at the pizzeria because of this. 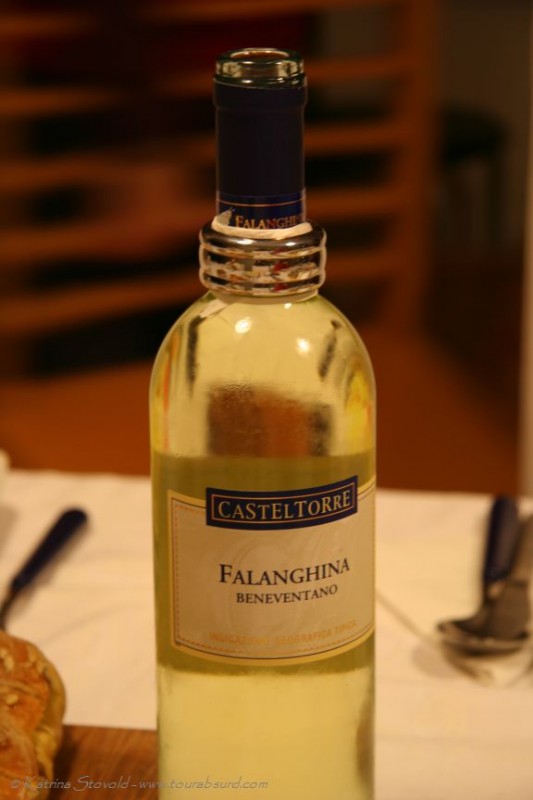 Naturally, there was wine on the table, as well.  I usually go for red, but with all the seafood I opted for the Falanghina, a white wine from the Benevento region.  It's handy to have family that travels up from Campania for the holidays.  Not only do they bring great wine, but also Neapolitan bread (Roman bread is traditionally made without salt – bleh!) and mozzarella di bufala! 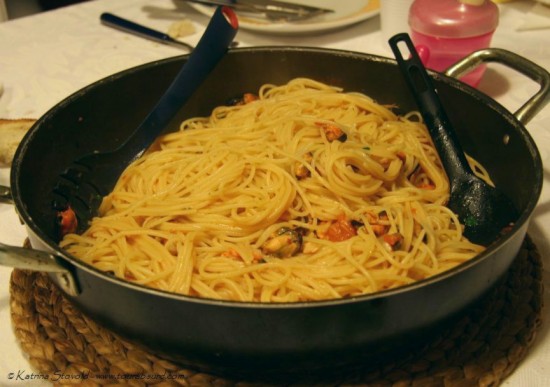 Oftentimes, seafood in Naples is served in a rather unadulterated form.  Fish come cleaned, but with the bones, skin, fins, and head still intact; shrimp come whole (like lobster), requiring some deft maneuvering with a knife and fork; bivalves likewise arrive in their shells.  This includes pasta dishes, where it is often necessary to wrestle with your food before eating it.  Further work is sometimes yet required, as mussels have an unpleasant tasting apparatus called the Byssus thread that must be removed.  Hilariously, the common name for it is "the beard".  Let the innuendo begin!

Happily, this was not the case with our Natale meal.  The mussels in the pasta had been both de-shelled and de-bearded.  Someone's hard work in the kitchen made for much less work at the table.  Whew! 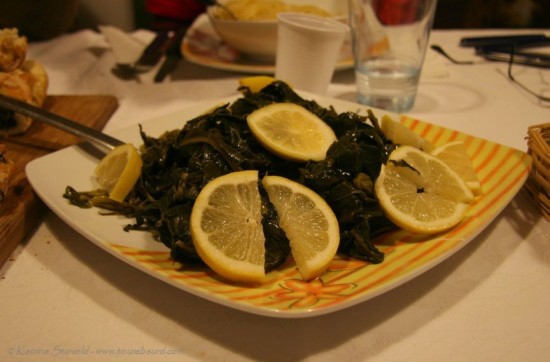 On the vegetable front, we had green salad, steamed broccoli, and tomato salad.  A common dish in Naples is friarielli, and it is quite distinct from broccoli.  Dario and I once encountered a bit of confusion at a restaurant outside of Naples.  We ordered broccoli but received friarielli instead.  Apparently in Campania, only Neapolitans differentiate between the two..?  In any case, Dario was confused, too, so I felt better about it.  (He actually likes the stuff, so that was also nice.)

For Natale, we had steamed broccoli – the real stuff.  Unlike Americans, Italians seem to focus more on the leaves than the florets.  Neapolitans do go for the florets of cauliflower, however.  Apparently it's a once a year specialty, not a commonly eaten food, and can be quite hard to find in Naples near the holidays.  One of the advantages of living in Rome is that there is virtually no competition for the large ones.  We had a huge steamed cauliflower for lunch that day, biggest I'd ever seen!  Looked like a big ol' brain, but more appetizing. 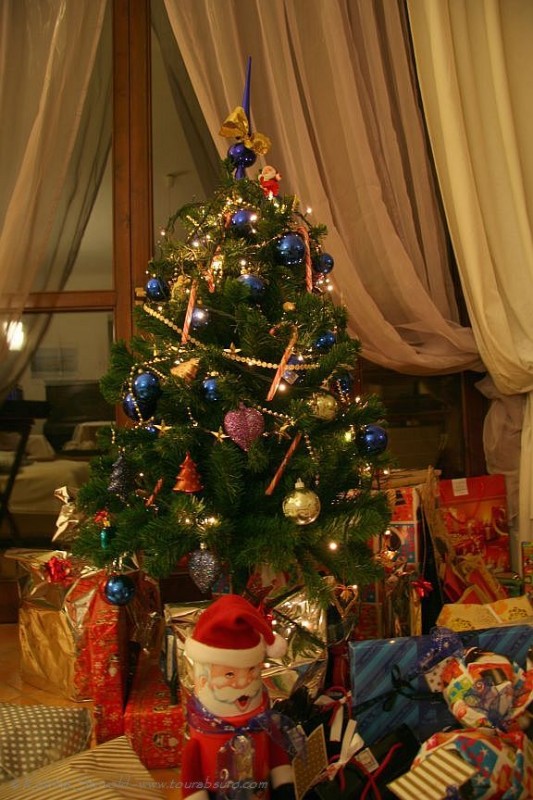 Despite taking small portions, I had started to reach my maximum capacity by this time.  I wandered over to the Christmas tree, a petite affair, but quite lovely.  Surprisingly, there were candy canes on the tree!  I discovered that they came from Ireland, brought over by Dario's parents from their visit the year before.  Not eaten, just used as decoration.  *giggle*

"Babbo Natale" is the Italian name for Santa Clause.  As far as I can figure, he is not quite as venerated in Italy as in the US, though his influence is growing.  Certainly, he's not the candymeister.  That title is reserved for La Befana, an old witch who puts sweets into stockings on the night before Epiphany (January 6).  It may not be eight days of celebrations like Hanukkah, but two days of presents and candy is much better than one! 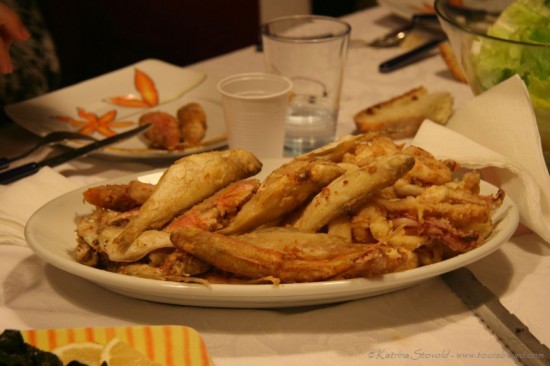 After immortalizing this year's tree in digital form, I wandered back to the table to find…  more fish!  This time, it was fried.  Whole and fried, I might add.  Normally, fried fish is one of my favorites, but the needle on the gauge was already pegged at full, so I skipped it and took a photo instead.  Sometimes, squid and octopus will show up in the mix.  I think there was some of each on the plate, but since food coma was well and truly in progress, I can't swear to it.

I retired to our bedroom for a while to check email and loosen the waistband a bit.  As much as I love my Italian family, I've always been an introvert.  Frequent breaks are required from festive occasions.  I think they're getting used to me, as I no longer get concerned looks and "what's wrong?" inquiries when I disappear for quiet time.  I suppose they've finally figured it's just part of my weird American nature. 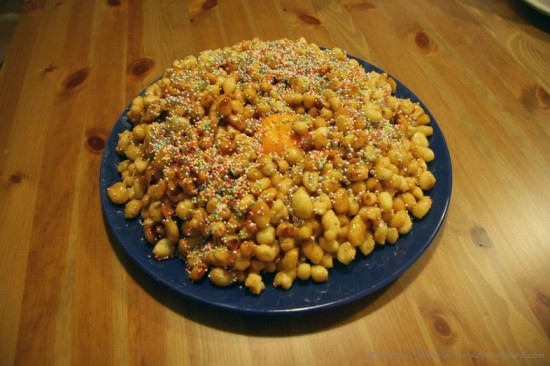 They are very inclusive and Dario makes sure to call me downstairs for important things like opening presents and eating dessert.  The day before, Mamma made struffoli.  She planned it all out so that I could take photos of the entire process, even saving a few bits and bobs for a round of cooking she did later in the day to accommodate our shopping schedule.  I've got to sit down with her and get the actual recipe so I can post it for you all.  (Spoiler: it involves fried dough, honey, candied orange peels, and sprinkles! ;)  It's a lovely end to a day filled with family, fun, and food!

What food did you stuff yourself with this holiday season?