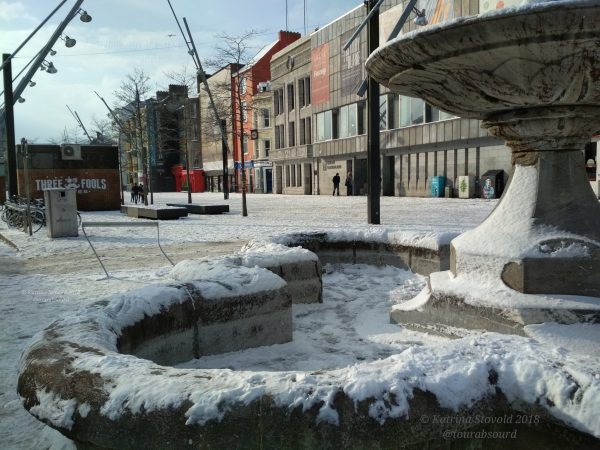 A place from my fevered summer dreams?

If you ever find yourself in Ireland with nothing to talk about, the weather is always a safe bet. Whether the weather is “lashing” (raining hard) or “roasting” (a bit warm), people are generally willing to jump on board with your pronouncements. The trick is you have to agree with whatever is said. I once failed to do that and, I’m pretty sure, the neighbourhood had a meeting to decide whether or not to ring the Gardaí. I later confessed my error to friends on Facebook.

“Broke a rule in Ireland today.
A woman said the weather was terrible,
I said it wasn’t that bad.
#socialpariah”

In 2015 Storm Desmond, a fearsome name if ever there was one, ravaged the Emerald Isle. Intrepid reporter Teresa Mannion was on the scene in Galway, urging people to stay safe. Or more specifically, warning “Don’t make unnecessary journeys. Don’t take risks on treacherous roads!” The Irish flare for drama and storytelling was on full display and the Internet responded accordingly. A remix was made from the broadcast, as well as a slightly more malicious go in which someone made it appear as if a flying stop sign had knocked Ms. Mannion over. The second video was shared numerous times as an initial flare up of Internet fame, then revived two years later when it was shared by both Snoop Dogg and 50 Cent. (More friendly remix version below.)

No Teresa Mannions were harmed in the making of this video.

More recently, Hurricane Ophelia knocked our fair isle about. While I don’t want to dwell on the damage and, sadly, the lives lost, it was a worrisome time. Being from California, earthquakes are something I tend to sleep through. Storms, however, can be quite frightening. It doesn’t help that my bedroom is on the top floor under the sloped roof of the house, and there’s a skylight that can be opened. I mean, it’s pretty neat when there’s, say, a supermoon, but more than a little disconcerting when a hurricane is bearing down.

At least something good came of the storm.
Can’t see the embedded post? Click here for a screenshot.

What’s currently happening is summer. And sunshine. LOADS and LOADS of sunshine. Some people are understandably happy about this. Goodness knows there have been years when we’ve had no summer whatsoever. The problem is that it’s too much of a good thing. Ireland is emerald precisely because of all the rain it receives. So when there isn’t a good solid rain for months on end, things start to get a little parched.

On the upside, the drying grasses have revealed all sorts of archaeological wonders. Two new henges near the famous Newgrange passage tomb were discovered using a drone. Mythical Ireland founder Anthony Murphy and Ken Williams of Shadows & Stone photography couldn’t believe their luck. It’s been all over the news, but you can read what they have to say on the Mythical Ireland website.

Here in Cork the discoveries haven’t been quite as momentous. Still, the doggy and I did have a wondrous moment of our own recently, at the foot of St. Fin Barre’s Cathedral. Gravestones have been moved or rearranged at many local churches. Some are so old that the engraving is illegible. I’m not sure why some get moved and some remain in place. Often they end up upright alongside the footpaths on the church grounds, delineating the walkways. Some even end up as paving stones. I don’t know if the occupants of the tombs get moved, as well, or if they are left to truly rest in peace.

As I understand it, when botanical irregularities give up the secrets of the archaeological, or even ancient architectural, wonders, it can be caused by a few different things. Sometimes it’s an indication that stones and structures remain in situ, with topsoil simply being thinner in those spots. In other cases, it can be a case of soil compression that makes it harder for moisture to penetrate. I think aeration is also a factor, but don’t quote me.

When the pupper and I were out visiting St. Fin Barre’s I noticed several thirsty looking patches of grass. I got very excited for a minute, feeling as if I’d made an amazing discovery. Probably something that no one else had noticed and that would land me on the news as Amateur Archaeologist of the Decade! (Sadly not a real thing.) Gobi, of course, only cared if it smelled like something he wanted to roll in. Got to have priorities.

In any case, I’m mostly stuck inside doing the academic thing. It’s a good thing I have the doggy to drag me out into the fresh air and force me to be social now and then. Else how would I make such stunning observations?

Whatever the weather in your neck of the woods, I hope you’re enjoying it, staying safe, and keeping well hydrated. Find me on social media and let me know if you’ve made any stunning discoveries lately!