What is the first thing you think of when you hear the words "Ireland" and "November" together in the same sentence?  Whatever it is, I doubt it is anything along the lines of, "glorious sunny day," "bathing suits," or "a good time to go kayaking!"

The closest I planned to come to the water during this season was crossing the River Lee to reach the center (or "centre", if you prefer) of downtown.  Over a bridge.  While well-bundled in polar fleece.  Ok, or maybe going on a harbor (or "harbour") cruise, while likewise wrapped from head to toe in insulation.  The last thing I planned was to be within centimeters of the ocean while paddling my way toward some sea caves.

In fact, we had tickets for such a cruise, purchased through one of those online group discount sites.  We kept putting off using it, as there was Always Next Weekend.  Last day to use it, however, was yesterday, and after a week of knock-you-sideways wind and rain, it was gloriously sunny.  So we got up early (for us) and made our way down to the quay (pronounced "key") listed on the ticket.  A group of 20 or so other folks were milling about, waiting for the tour operators to show.

One of the women in the group announced she had just received a phone call from a family member who was at home on the computer.  They reported they'd just received an email from the cruise company saying there'd been a mis-print on the tickets.  The season had actually ended the prior weekend.  Sigh.  How could that be?  We arranged a sunny day and everything!

But then we remembered another group ticket we'd purchased from a similar site for kayaking around sea caves.  I don't know what I was thinking, buying a ticket for kayaking in October (would explain why the price was so good), but there you have it.  Now, a month later, we found ourselves with a sunny day on our hands and nothing to do.  And since there is probably a law on the books somewhere saying, "Thou Shalt Not Waste A Sunny Day In Ireland", we were obligated to make use of it. 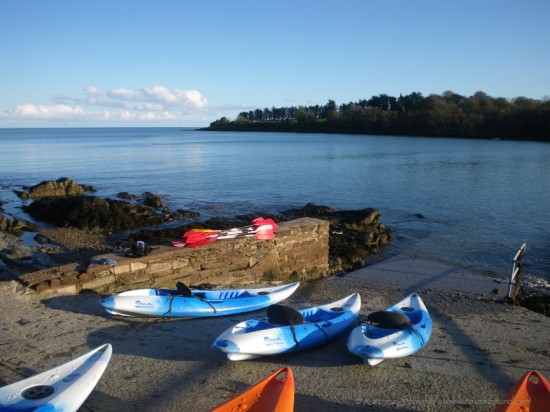 I called the kayak company, one "Funky Town Adventure Centre", to see if any tours were planned for the day.  There was!  Hooray!  Kayaking!  On a sunny day!  In Ireland!  …in November.

We stopped for fish and chips in nearby Crosshaven at an outfit named Chish and Fips.  Despite their lack of spelling prowess, the proprietors do know how to make excellent fried fish.  We had haddock and, I must say, it was the best fish I've had in Ireland (chips were great, too, but best chips ever were from a chipper in Kenmare; sadly, their fish was the pits).

The group was departing at 3:00 p.m. and we were asked to arrive 15 minutes prior.  It took a bit longer than that to get suits sorted and such, but it was fine with me because there was a doggy to pet.  I know some of the Magical Doggy Scratching Spots (aka, the art of Dog Fu), so we became fast friends. 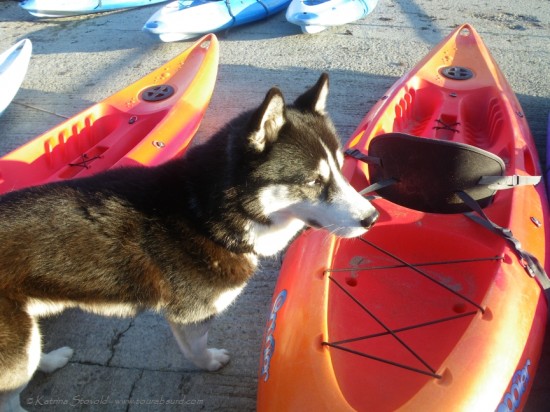 The owners seem to think he is rather aloof, but we got along fine.

Most folks opted for single kayaks, but since Dario and I would be relying on arms that had lately seen their most strenuous work lifting laptops into more suitable positions, we opted for a double.  Dario is also tremendously sympathetic to this blogging affliction I have.  He knows I want to take pictures at the most ridiculous of times, so thought he'd better keep an eye on me.  He has more experience paddling than I do, too, but I'm pretty good at steering (he will disagree with me; ignore him). 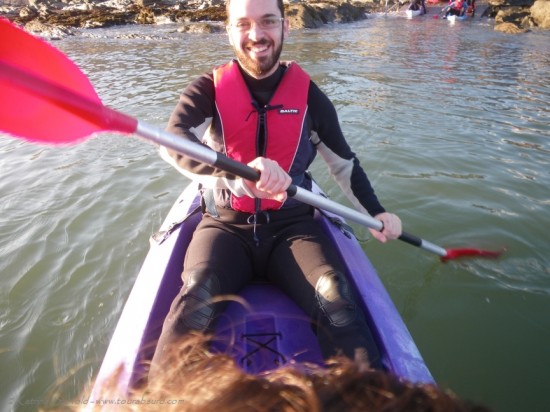 One thing that became quickly apparent is that my photography would have benefited greatly had I employed a lanyard with a clip that allowed me to keep the camera tucked into my life vest and out of the bottom of the boat.  I had visions of capsizing and did not want to lose my faithful waterproof camera.  I knew it might happen if I tucked it into the vest with no ties.  (Desperate flailing has a way of causing valuable objects to disappear, you see.)

So each time I finished taking pictures, I set it in the little depression in the center and attached the wrist strap to the boat.  This meant that every time I noticed something pretty or interesting, I had to untie it and wipe the lens off.  This led to very mixed results. 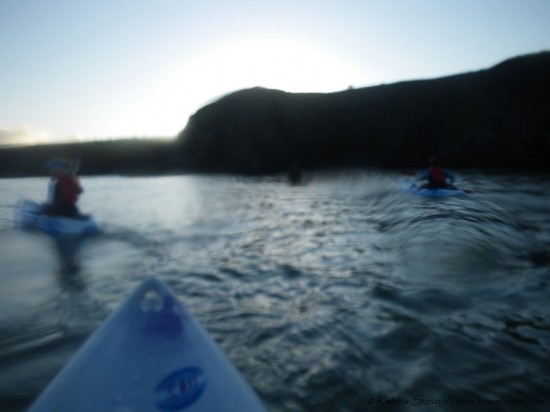 Man, what was in those fish and chips?  No wonder that place had a weird name.

I choose to interpret the above photo as a "dreamlike action sequence."  It makes our paddling action appear much more daring and us-against-the-elements-like than would otherwise be the case.  Imagine us braving level 6 rapids on a death defying adventure in Nepal and you'll get the picture.  So to speak.

One benefit of not planning this in advance was that I didn't think to bring a bathing suit (bikini + Ireland + autumn simply does not compute).  Underneath the wetsuit I was wearing a t-shirt.  This was good, in that it turned out to be the only dry thing on the boat and could just barely be accessed beneath my collar.  Yay!  I could wipe off the lens!  …it didn't work quite as well as hoped. 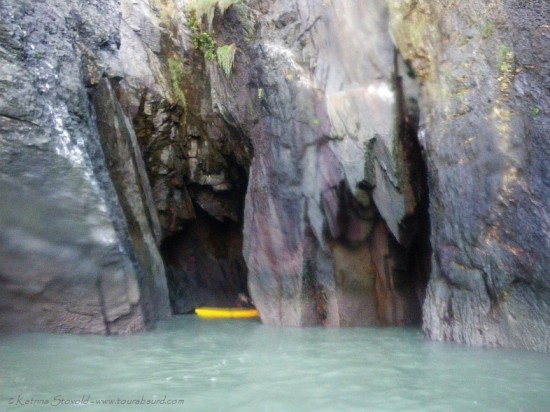 If you squint or splash some salt water in your eyes, this will look better.

The tide was quite high, so there wasn't a lot of access to the promised sea caves.  They were more like sea indentations.  But the Irish coastline is always gorgeous, so it was still tons of fun.  Not to mention that birds were out to play, fish were splashing, and a seal popped up to say hello. 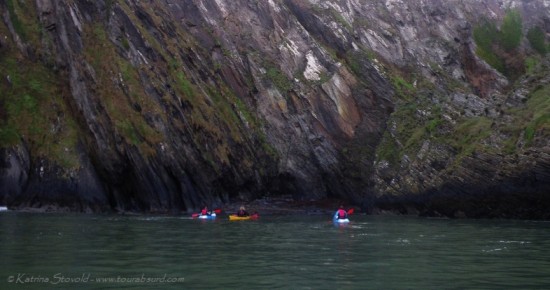 Love the texture of the stone.  …I think I need to take a geology course.

We did manage to squeeze into one cave without bashing up the boat too badly.  Dario was perfectly content to try and keep things steady for me while I tried to get a good shot, but there were other people waiting for a go (small cave), so I didn't have time to sort the lens issue. 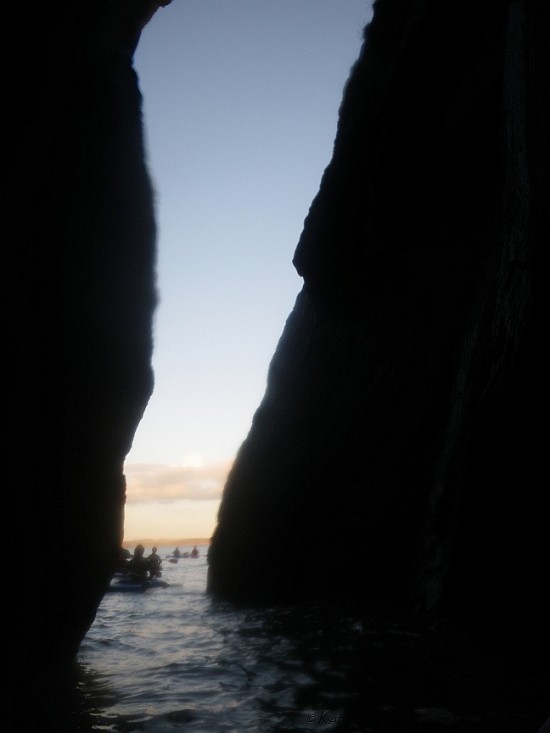 As we were first in and first out, we had a few minutes to relax.  I tried a few more lens cleaning go-rounds.  Managed to get another picture of the cute guy behind me, if a bit crooked.  Oh, and yes, my hair has a supporting role again. 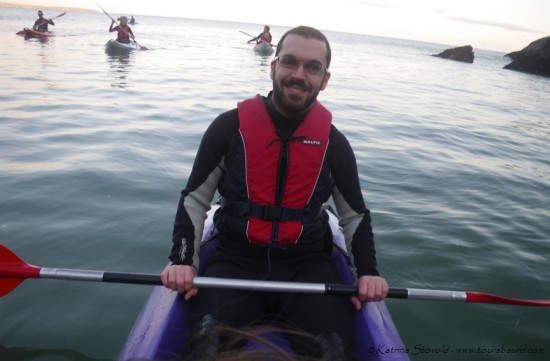 My personal paddler is an Italian import.  It's a nice model, don't you think?

And then providence smiled.  The lens was clear, the lighting was gorgeous, the horizon was steady, and the shutter clicked at the right time.  Perfection! 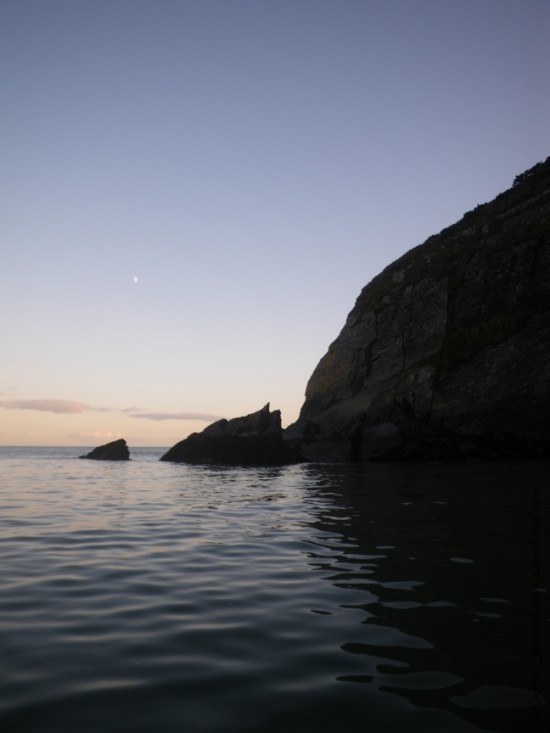 That's the moon in the upper left.  It was bigger in person.

There's room enough at the top of the photo for a title, so this could be used as a book cover, or one of those motivational posters.  Something deep and meaningful like, "Tranquility: it refreshes the soul", "Nature: wild perfection", or "Photography: you got lucky this time."

I forgot to mention that when we had started our journey, we'd had the wind at our back and the tide in our favor.  We'd also had some direct sunlight to warm our bones.  We thought we were pretty badass for a couple of computer jockeys who hadn't kayaked in years.  On the way back, things were a bit different.

Everything was still beautiful, but not nearly as easy.  Dario, the main steam engine behind the expedition, started getting blisters on his hands and ice cubes at the ends of his legs.  My left shoulder started tingling in a nerve-pinchy sort of way, which meant I became a very lop-sided sort of paddler. 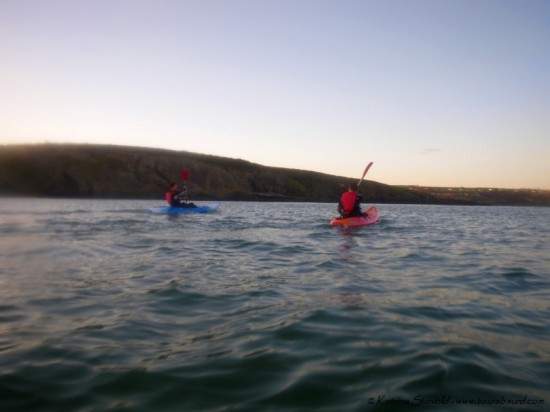 The scenery was still gorgeous, but our discomforts started to become distracting.  I tried to think more about the cheerful, disco buzz of Funky Town than James Horner's Hymn to the Sea.  The latter was, in some ways, more appropriate to the mood.  However, as Cobh (pronounced "cove"), the last port of call of the Titanic, was about 7 km (4.5 mi.) away as the crow flies, it seemed a poor choice.

We were each a bit cross as we neared land, but managed to get there without tipping over or swatting at each other with our paddles.  (Probably couldn't have swatted even if we'd wanted to, really, what with the blisters and pinched nerves and whatnot.)  We both froze a little bit more as we peeled off our wetsuits in the changing rooms.  Bare feet is not a good idea when you are wet and cold, especially if you must walk on concrete at all.  Oh, and we utterly neglected to bring towels — d'oh!  It's a bit harder to thaw out when you and your skivvies are damp.  Noted for next time.

The voucher we had said the cost of renting wet suits was €5 apiece.  When I asked the proprietor about it he waved me away with a smile.  I thought that rather magnanimous of him until he said, "These are just the summer suits.  The winter suits will be out next trip."

And so we waved a cheerful goodbye and rushed back to the car to turn on the heater.  It took a while to get the car warmed up.  Dario snacked on leftover chish and fips, since his metabolism requires calories to get functioning at optimum levels.  Mine, on the other hand, requires luxuriously long baths in steaming hot water followed by time spent in front of crackling fireplaces.  (I made do with a shower and a wall heater.) 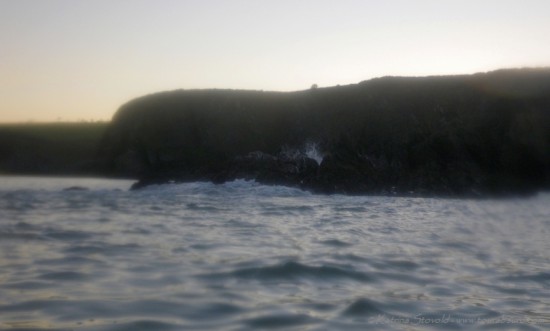 Oh, all right.  Since we're safely back, you can listen to James Horner now.

So what did we learn from this trip?  1) don't trust the dates on tickets; 2) buy a lanyard with a clip; 3) bring a camera-wiping cloth in a waterproof pouch or wear a t-shirt under your suit; 4) wear winter weight wetsuits; 5) bring a towel; 6) bring a change of clothes; 7) sunshine and adventure are possible in November in Ireland!

I think it's time to go wake the man now and demand tea and scones as part of my recovery package.

What non-seasonal adventures have you undertaken?

22 thoughts on “Of Kayaks, Cameras, and Cold”