The Pertosa Caves (Grotte di Pertosa), also known as, the Angel Caves of Pertosa, takes a while to reach if you're coming from Naples.  Still, it can be a fun afternoon trip, driving through the southern Italian countryside, especially if you are a cave geek, like me.

Despite being a commercial cave (vs. "wild," and requiring caving gear and expertise), I thought "Angel Caves" was a lovely name.  I rather expected to see some giant, wing-like formations, along with a few shrines to various saints and archangels.  What I did NOT expect was the highly dangerous and rarely encountered CAVE DUCK! 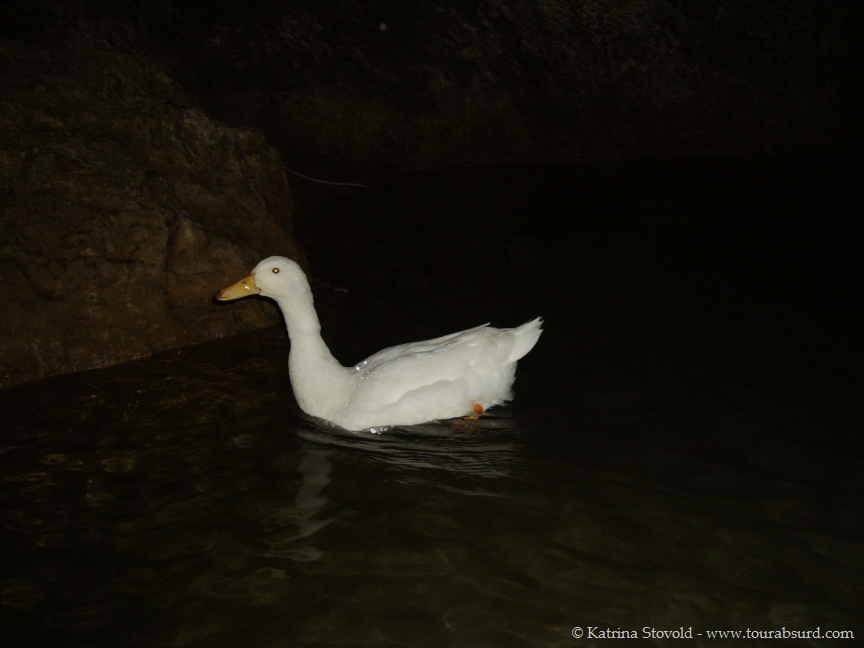 White feathers like an angel, it's true, but 'ware the beady red eyes and the Quack of Doom!

Although the official site (in Italian) has lovely photos, nowhere do I see any warnings about this monstrous beast.  Likely they do not want people to know because they are trying to make a buck and hide the duck.  Little do they realize how easy it would be to capitalize on the danger, the drama, and the daring needed to go head to beak with such a creature!  No one has seen Nessie in years, and yet Scotland is making a killing.  Oh, Italy!  Why do you pass by such a golden egg of an opportunity?

If you are brave enough, visit the caves!  Take your life in your hands and go!  It shall become your yellow-beaked rite of passage and we shall be as blood-kin, having both passed this most trying of challenges.  Will you join me in this duck-defying act?  Sally forth, my brethren and sistern!  To the caves!

FEAR NOT THE DUCK!*

*I wish I knew how to say that in Latin.