Sometimes daydreams help shape goals, crystallize fantasies, or expand consciousness.  Other times they serve as a refuge from the pain of everyday life.  At this time the latter dynamic is in play.

I try to keep TourAbsurd as one of my happy places, as most of you know, so I won't get into detail right now.  Let's just say that I'm having to re-align my vision for the future.  Most days are a mix of, "Yay! Look at this cute apartment!"  And "I'm in CORK!"  And, "Wow, but my friends are awesome!" interspersed with near crippling sadness and anger.  But then one of my friends will text to tell me about a dancing flash mob or a trad session at a local pub.  Before too long I find myself clapping along with fiddles, guitars, and a bodhrán, being amazed and delighted at the warmth and culture of this little green island.  As Sam Elliott said in The Big Lebowski,

"Sometimes you eat the bear and
sometimes the bear, well, he eats you."

In keeping with the idea that it's better to eat rather than be eaten by the bear, let's get back to some daydreams for future travel.  (The bear, you see, is sometimes my own unhappy thoughts.)  Previously, I talked about Nepal, India, Sri Lanka, Thailand, and Myanmar.  There is, of course, so much more to see.  Today I'm going to fill in the map a wee bit more and talk about Vietnam, Hong Kong, and Japan.  :)

For Vietnam, I really have a nebulous view of what life and culture are truly like in the country.  I have bits and bobs from boot camp and military novels tucked away in my memory, and of course some hazy memories of the political upheaval of the war.  Growing up in Southern California, we were quite near Camp Pendleton where many Vietnamese refugees were temporarily housed.  My mom was a volunteer English teacher, so I've got a few flashes of driving through a densely populated tent city at night.  Until I got into this travel blogging stuff, that was about all I knew. 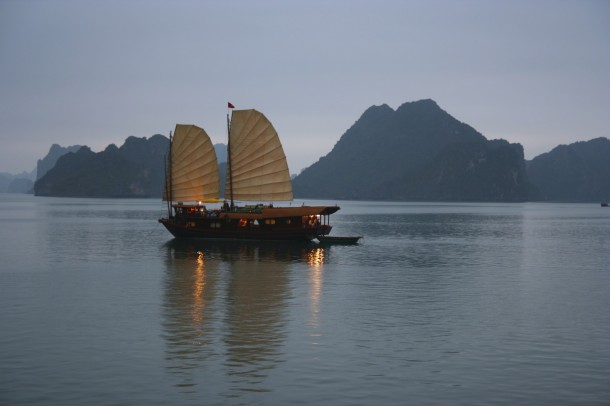 "A Junk boat sits on the tranquil waters of Halong Bay at dusk
(keep in mind, dozens of other junk boats are just out of frame!)"

More recently, I've seen beautiful photos from several of my fellow travel bloggers of an iconic location that is just gasp-worthy in its beauty.  Being a bit of a gaming geek, I've even seen some of the features show up in a few video games.  The place?  Halong Bay.

This photo is by my friend, Lisa Lubin, who had the good fortune to view this lovely place in person.

On the TourAbsurd Facebook page, I've lately taken to posting beautiful photos from all over the world.  A handful from Vietnam have popped up, and I've been amazed at the diversity of the landscape.  Did you know there are huge sand dunes in Vietnam?  Areas that resemble the Sahara in appearance, if not climate.  Punch "Vietnam desert" into your favorite search engine and see what pops up.  Nifty stuff – definitely a place to put on the list!

Heading east, we (eventually) find Hong Kong.  I admit that going back in time to visit while it was still under British rule is a bit more appealing to me.  However, I am now friends with a really nice CouchSurfer from HK whom I met in Cork.  Her name is Abi.  She travels to some interesting places around the world AND she's a photographer, so I get to witness some of her adventures in beautiful and colorful ways. 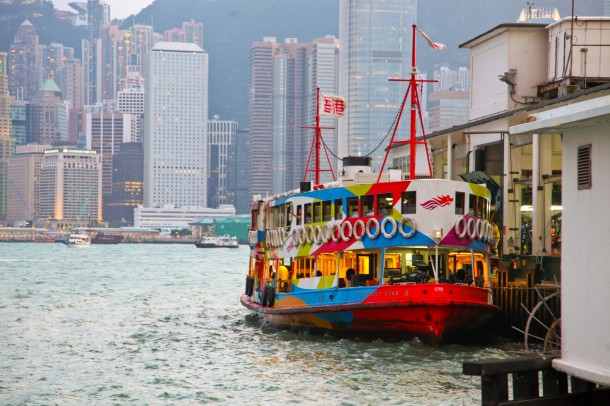 "The star ferry crossing the Victoria harbour,
very cheap and good way to enjoy the beautiful view of this city."

It's amazing how the color of the ferry stands out against the muted background colors of the city.  Abi says the boat is a "special edition" from the Hong Kong tourist board.  Well, it worked – I want to go!

Abi has many more photos from the streets of Hong Kong that are bursting with color.  However, this bit of quiet devotion amidst the chaos of city life really appealed to me. 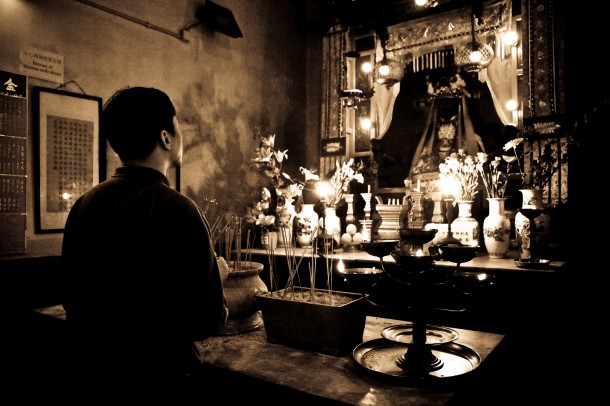 "This is how people worship in the temple."

She says this is the practice of Jiangxiang which, according to Wikipedia, is "…a ritual of offering joss incense accompanied by tea and or fruits."  Seems very centering, something I would certainly need to survive the hustle and bustle there.  Balance in all things.

I very much hope Abi makes it back to Cork because it was wonderful to have her here.  However, I'd like to visit her amazing city in person to experience the sights, sounds, and smells in three dimensions (or more!).

Finally, I'm going to head a little further east and a bit north to touch on Japan.  I have a cousin, several friends, and a Marine buddy (which makes him family, you see) who live there.  A number of my geek-inclined pals have dreams of living in Japan for the tech and the anime, but for me it's about the natural beauty, the architecture and gardens, and – of course! – the sushi. 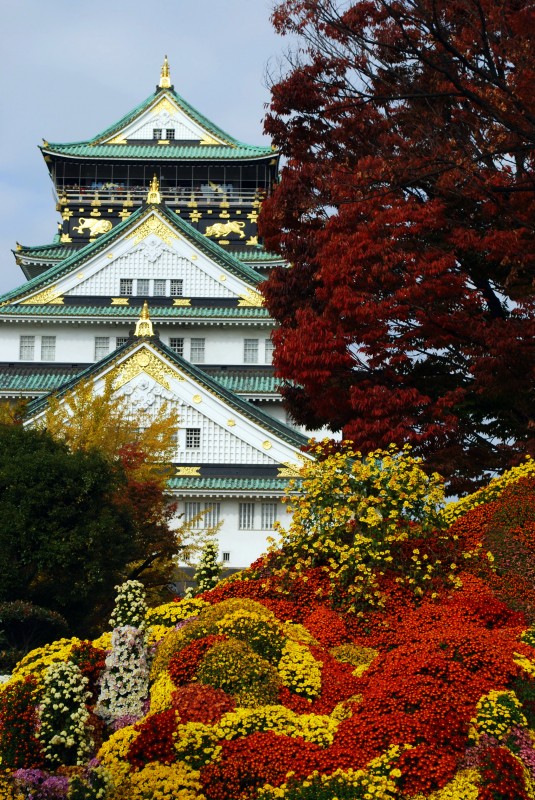 According to my Uncle B., "This is a third generation castle and is surrounded by a beautiful large park and ringed by huge moat and massive stone walls. One of the rulers of this castle liked gold so it is everywhere.  Fun place." 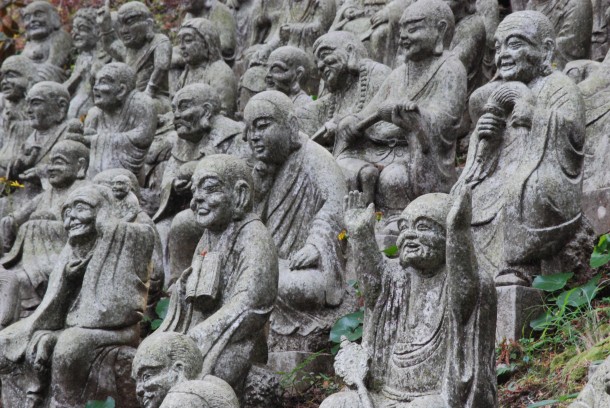 Once again, Uncle B. speaks: "Hundreds of these little statues are outside the temple, and they all have different expressions."  I guess I have a thing for temples and places of devotion, which is part of why this photo appealed to me.  And, as you know, I have a thing for impish grins and mischief, too, so the expressions on the faces of these guys makes me smile.  :)

And finally, to wind up today's daydream, the last photo will be… a MONKEY! 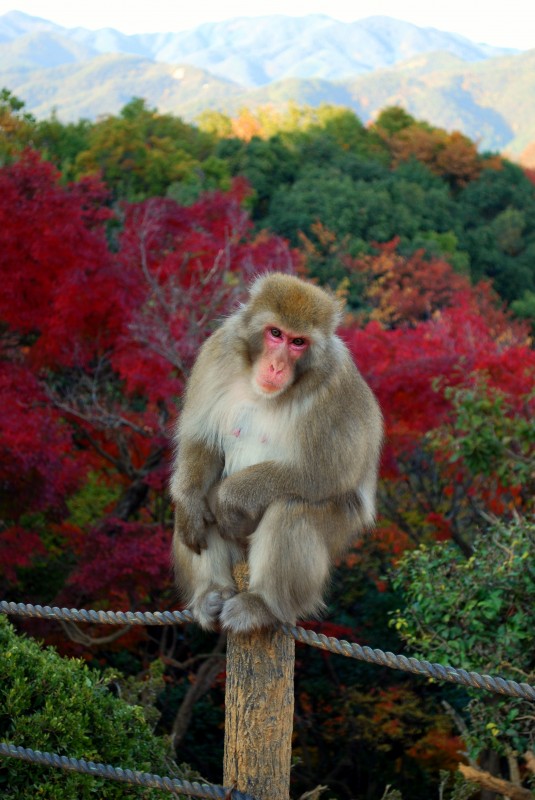 Uncle B. describes it thusly: "You climb up a steep mountain trail and realize you are on the right track when you see monkeys in the trees along the trail.  This park does it the opposite of others; tourists go inside a large cage like cabin and buy monkey food.  Dozens of monkeys (some just babies) hang and climb all around the humans inside the cage.  Outside, we all posed with friendly monkeys on the mountain top with a beautiful view of Kyoto and beyond.  You need to be in decent shape to make it up to the monkey park on top of this mountain, but it's well worth the trip."

Aw, man!  I LOVE monkeys!  If I ever make to India, I'm definitely going to pay a visit to some of the Hanuman shrines.  I mean, I saw monkeys in Tanzania, but didn't really get to interact with them.  Many temples around Asia, or so I've heard, have signs warning people NOT to engage with the monkeys.  A photo I once saw of a warning sign declaring, "Monkey steal your thing" is one of my favorite snaps of all time.  Stories of monkeys making off with sunglasses, cameras, wallets, even small children, abound.  (Ok, maybe not small children.)  But to be encouraged to feed and play with them?  How great is that!

Next time you are having a bear-wrestling moment, remember to look eastward and dream.  Even if you can't see Vietnam from where you are, keep looking.  Eventually the sun will come up again.

Thank you so much to friends and family who allowed me to feature their photos!

6 thoughts on “Dreaming of Asia: Part 2”