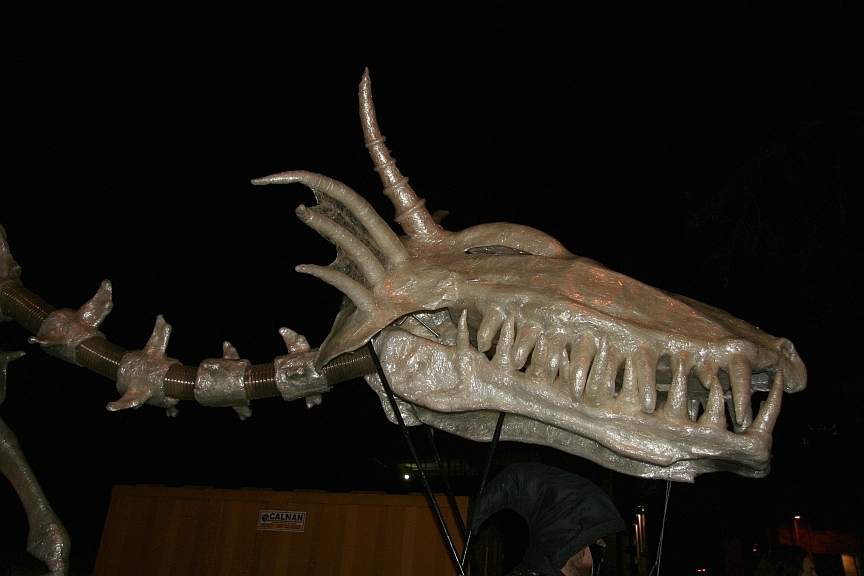 Wikipedia defines Samhain as "…a Gaelic festival held on October 31–November 1. The Irish name Samhain is derived from Old Irish and means roughly 'summer's end'."  The term is often used by neopagans as a way of reclaiming the holiday from the clutches of Hellmark– er, Hallmark, sorry — and injecting it with some of the dignity and culture the event once had.  It is one of the Wiccan sabbats.  It is said to be the time when the "veil between the worlds is thinnest," which makes it conducive to communication with those who have traveled over to the other side.  I have also heard it said that it is the Celtic New Year (unconfirmed!) or a time between the worlds, when nothing after sunset on the 31st and before sunrise on Nov. 1st really counts as real.  Good times!

Throughout October, I was very excited to see signs around the center of Cork for the Dragon of Shandon's Samhain parade.  Not simply a Halloween parade, a SAMHAIN PARADE!  Oooo!  *clapping in excitement*  What fun!

The Dragon of Shandon website explains the parade thusly:

Samhain – the time between times …

The Dragon of Shandon is a street parade celebration of Samhain and creative partnership between artists and communities that takes place on the night of October 31st  in the heart of Shandon, Cork , Ireland.

Each year thousands take to the streets of Shandon on Cork ’s Northside to walk with the Dragon as it travels between worlds in a celebration of the living and the dead accompanied by an assortment of creatures from the underworld.

…The centrepiece of each parade is the Dragon, 12 meters of sellotape and animated by twelve puppeteers on the night who walk it through the streets of Shandon along with an array of illuminated props, lanterns and characters.

Cork Community Art Link invites you this Samhain to dress up and walk with the Dragon through the historic heart of Shandon.

And so it was with great anticipation that I grabbed Dario and our upstairs neighbor, a nice Canadian lady, and headed out to brave the dragon!  :D

As we waited with the crowd for the parade to come down the hill and run along the water, strange things started floating up the river… 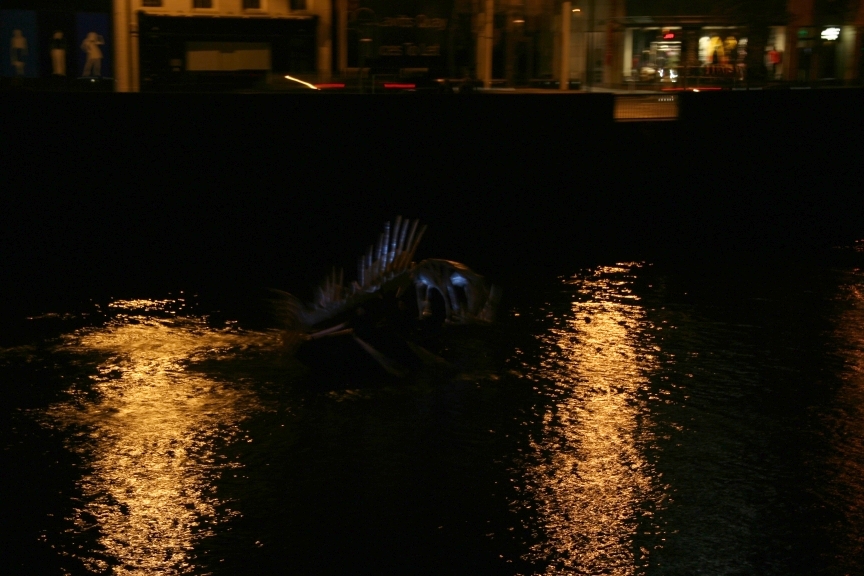 GAH!  It's a fish skellington! 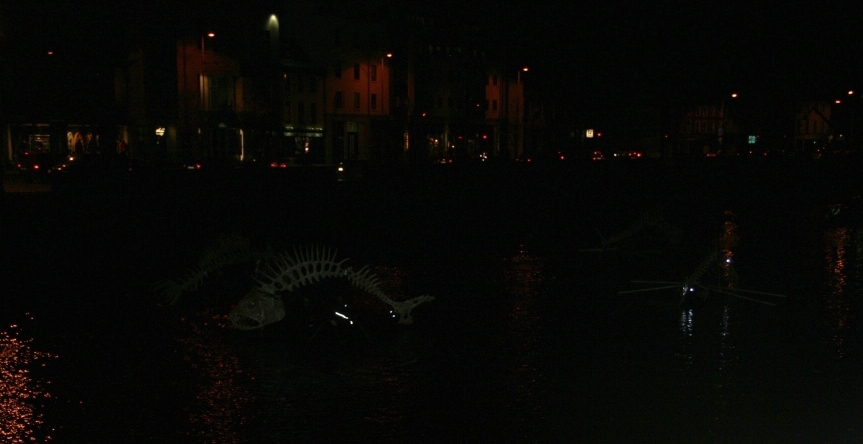 Finally the creepy fish school passed!  By the time I turned around, the crowd had already moved part way up the hill to see the parade.  I squeezed through with my camera (being wee has advantages) and came face to face with THIS! 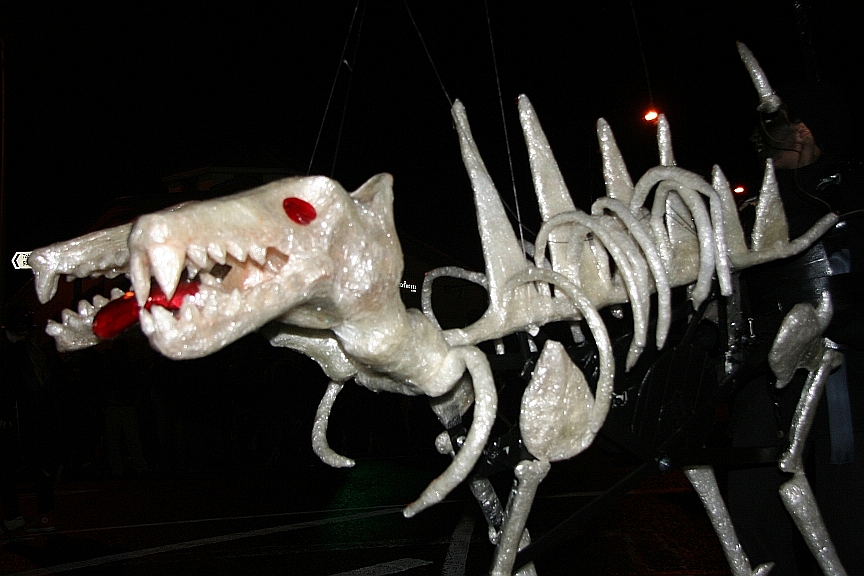 Ok, I'll be honest.  I don't know what it was.  But the puppeteers were great! 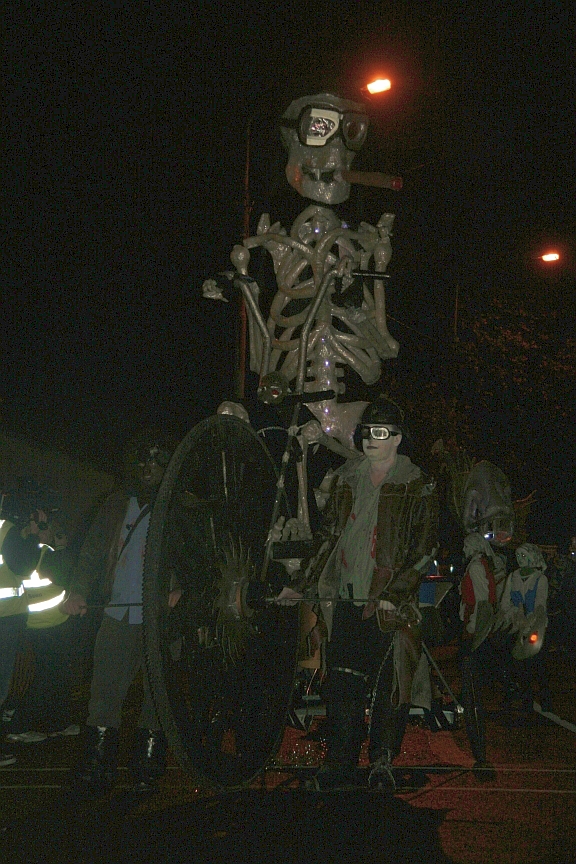 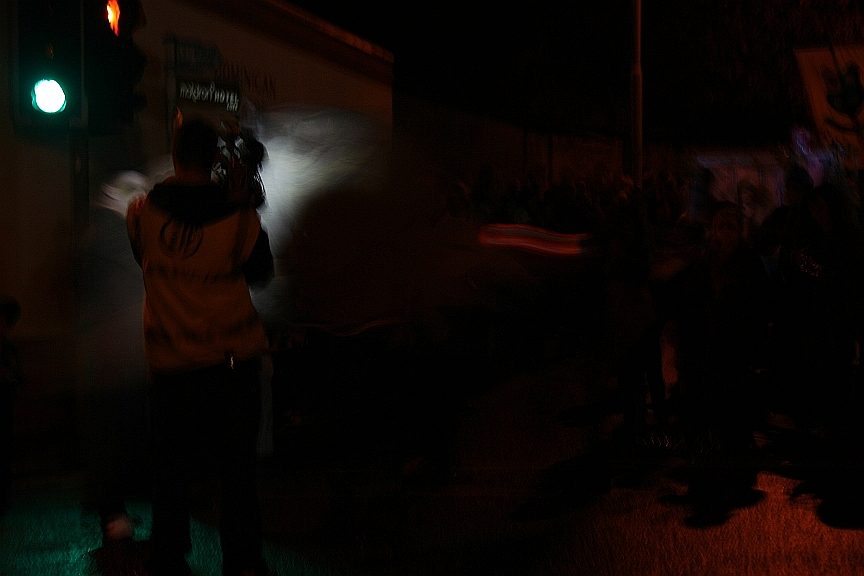 Casper, is that you?

The lighting was not ideal, so getting a good shot was challenging.  There was a videographer or two roaming about, looking official and stuff.  They had nice bright lights on the front of their cameras.  I didn't manage to piggyback on their lighting setup, but I did get this cool pic of one of the camera guys. 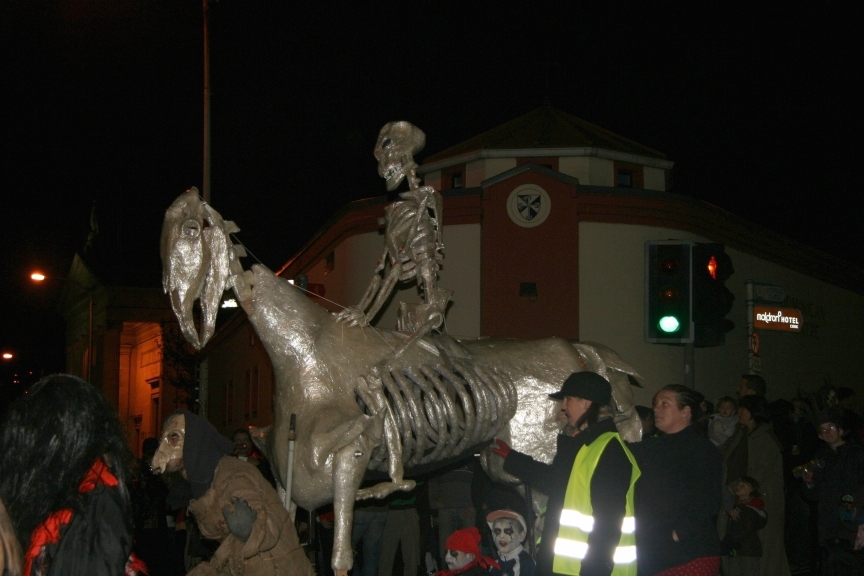 On a pale horse.

One thing's for sure: you're going to want a good saddle pad before you mount that thing.  Ouch! 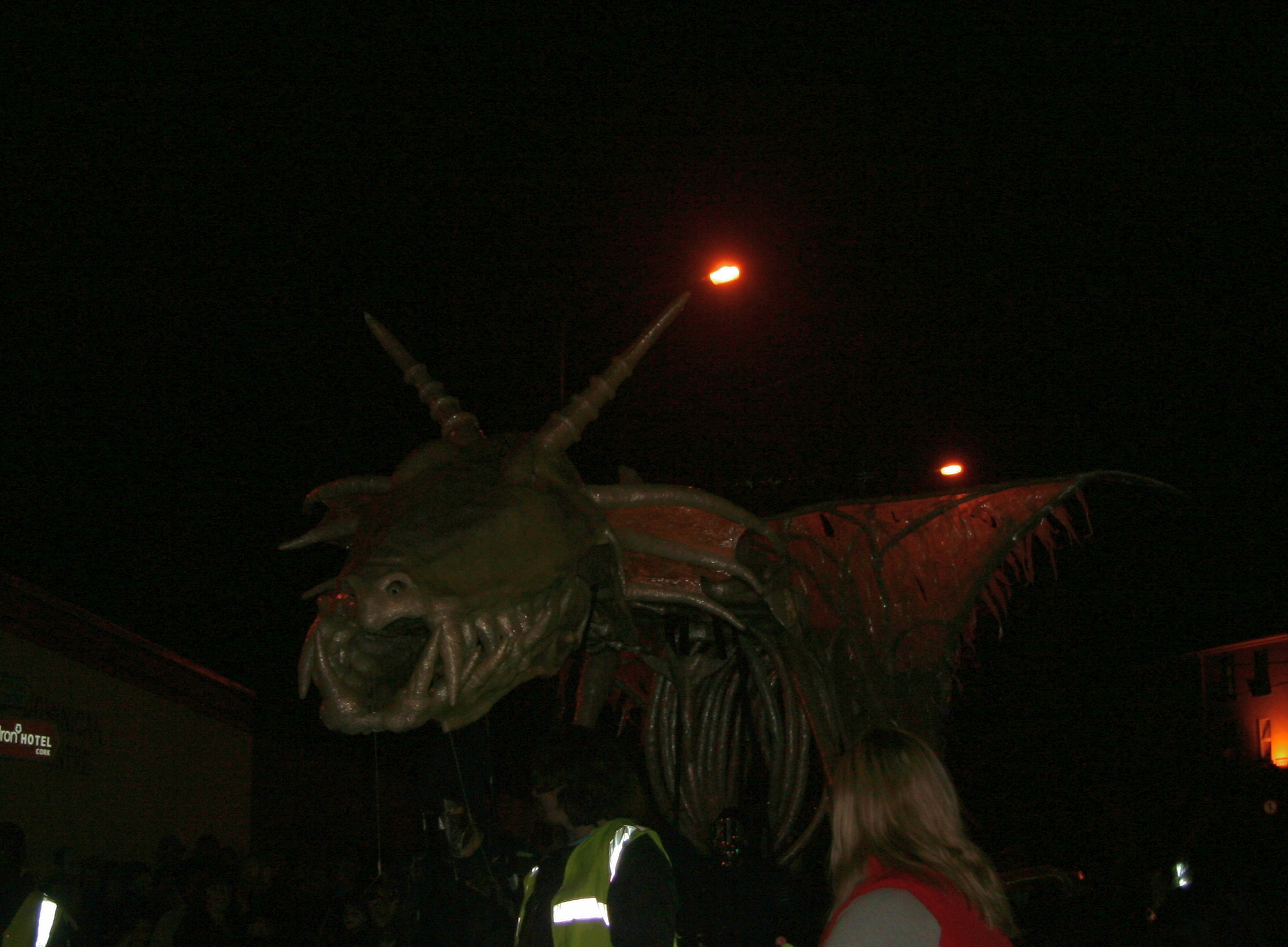 There she is!  Miss Amer– uh…  Samhain Dragon? 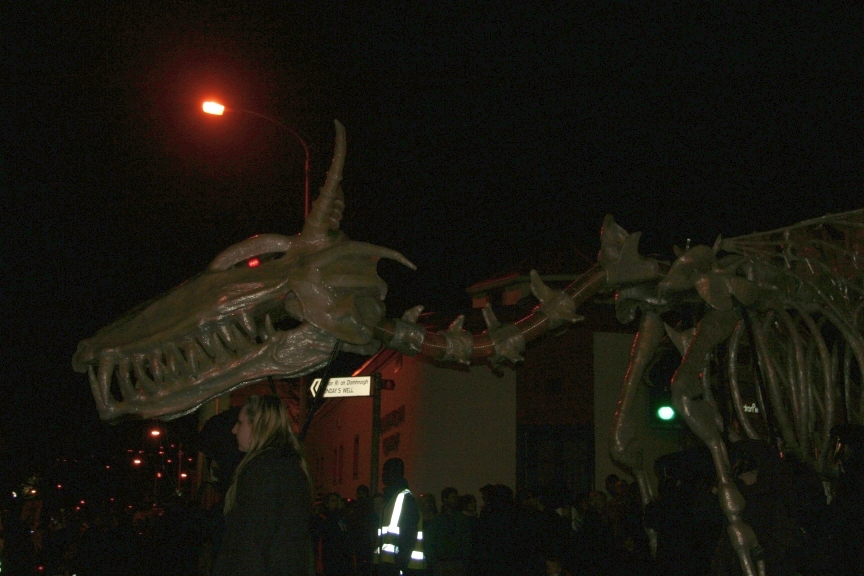 Here, let me just go get that redeye filter…

At one point I was snapping pictures of the dragon, desperately waiting for the flash to recharge and I heard my name called.  Moray, of Mutant Space, was helping to guide the dragon and recognized me.  Yay!  I'm famous!  :D

Besides the dragon, there were a few bones bands, merrily playing bonely (a perfectly good word, don't you forget it!) percussion music, dressed in black and wearing masks and/or skeleton outfits.  Sadly, black at night doesn't show up well in photos!  (Thank you bones bands, for gathering the ills of the village and taking them away!)  There were also children looking for words of wisdom, mad clowns, and a crowd of screaming little girls.  As odd as it sounds, the swarm of black clad little girls was one of my favorites.  They gathered, swirled, furled and unfurled, and wheeled about like a flock of little blackbirds, screaming all together at random intervals.  Oooo, I'm getting delighted little chills just typing this!  So fantastic! 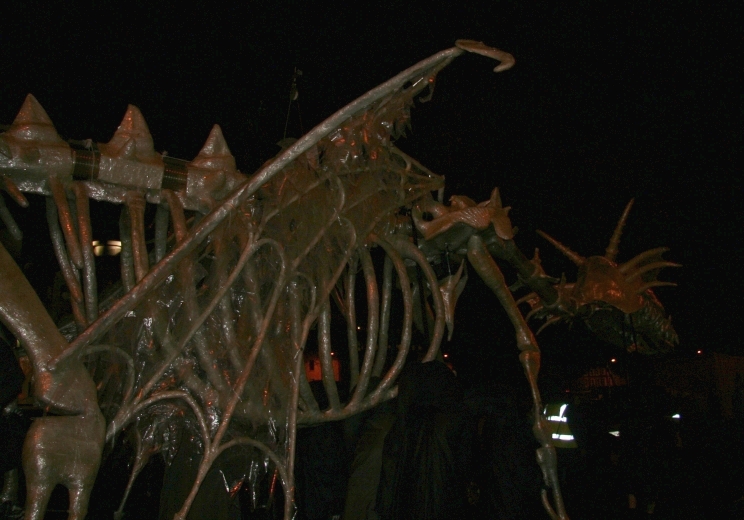 I found Dario after the parade and started to head back to the apartment.  As we walked along the River Lee, we again saw… creepy fish skeletons! 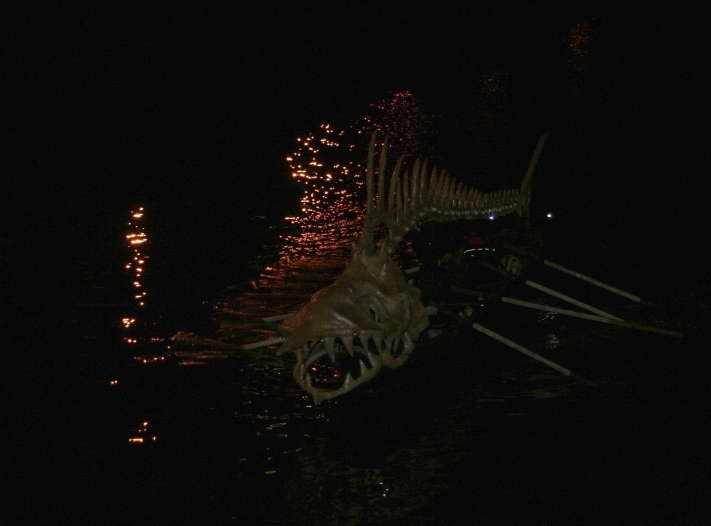 Creepy, yes, and SO COOL! 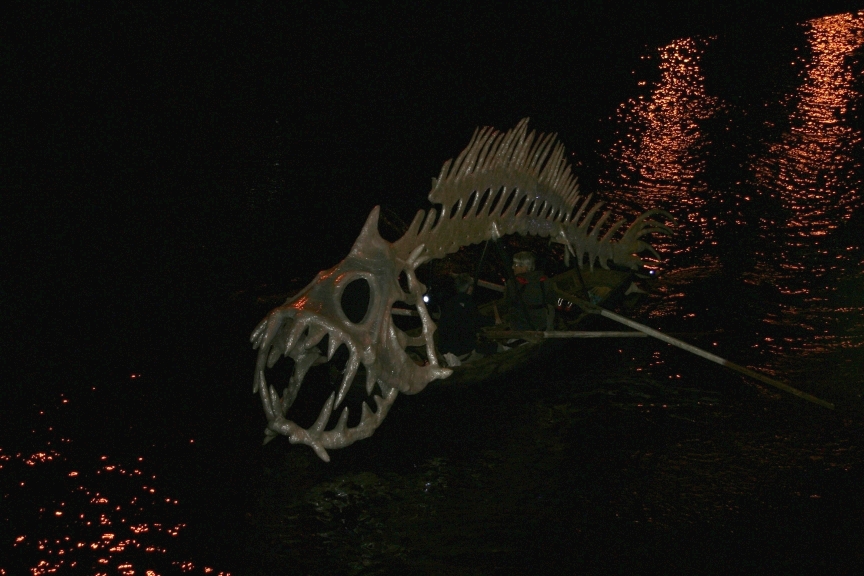 I don't know whether to feel guilty or relieved about that tuna I ate the other day. 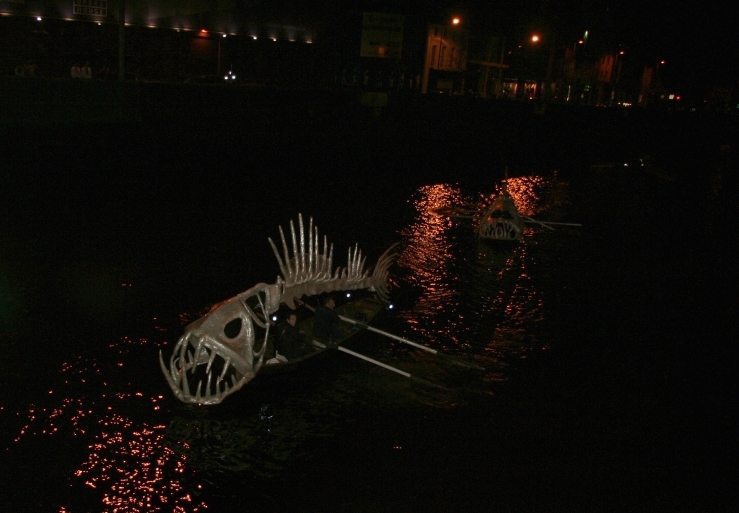 Y'know, I have to say that when I think of Samhain I never really thought of Dragons.  Now I'll think of it every year!  All in all, a fantastic experience!  Thank you, Cork Community Art Link!  EXCELLENT JOB!  :D

8 thoughts on “The Dragon of Shandon Samhain Parade”