Among all of the amazing experiences in Morocco that I've been savoring (and oddly reluctant to share), the final day of camel trekking ranks right at the top.  It started with waking up in the Sahara, tracking where the "4×4" beetles had gone during the night, and walking barefoot in the gorgeous sand. 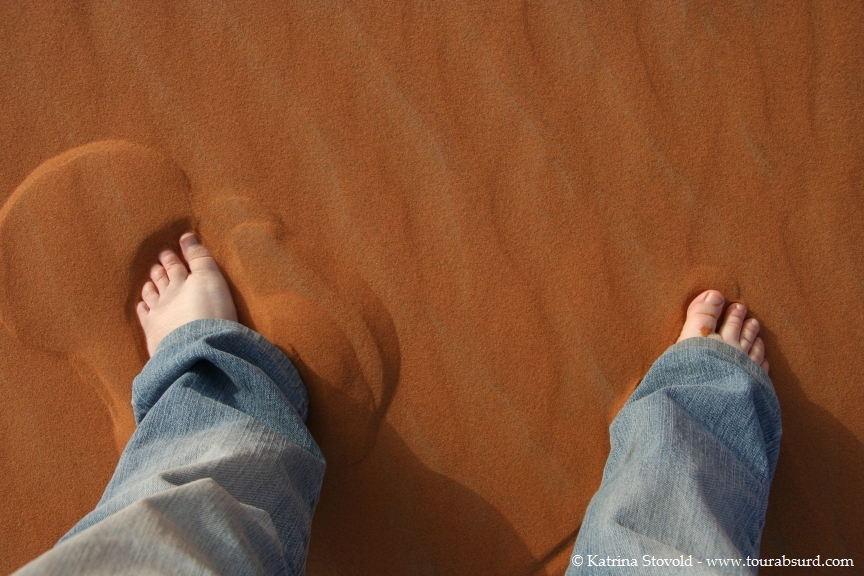 This little piggy went to the desert…

After one final ride on my beautiful camel, we headed out of the dunes.  We stopped for a while at the hotel, the Auberge Sahara, for showers, lunch, and a bit of laundry washing.  I figured if there was anywhere on earth that clothes would dry quickly, it would be the Sahara!  (It still took a few hours for my jeans to get all the way dry, but geezo, that's faster than the dryer here in Ireland!)

Eventually, we headed off to find a ride to Rissani, the nearest town with bus service.  We were planning to get an overnight bus to Fes.  First, however, we planned to visit the "City of the Dead."

I have mentioned before that I am a big geek.  This manifests in various ways (a general appreciation for computers and microwavable foods, hours spent reading National Geographic and science articles, finding lolcats endlessly hilarious, etc.), but the most significant is perhaps my past employment history.  About a decade ago I worked for a visual effects company.  Of all the films I worked on, one of my absolute favorites was The Mummy.

Unknown, and quite likely irrelevant, to most people is that The Mummy was not shot in Egypt.  Rather, much of the location work was completed in Morocco.  I was working on the post-production side of things, so I wasn't there during the actual filming.  I had read that a volcanic crater (!) near Erfoud had been used to represent "Hamunaptra," a.k.a., the City of the Dead. Information on its exact location, however, was scarce.

Local folks from Erfoud and Rissani looked askance
at us when we started inquiring about volcanoes.

Somehow or another, Rachid got information on the general location of the crater, so we headed off to see if there were any buses going the right direction.  A quick chat with a passer-by led Rachid to believe that there were not many options for public transport.  Just then I spied an old jeep turning the corner and nudged Rachid.  He flagged down the driver who agreed to let us hitch a ride. 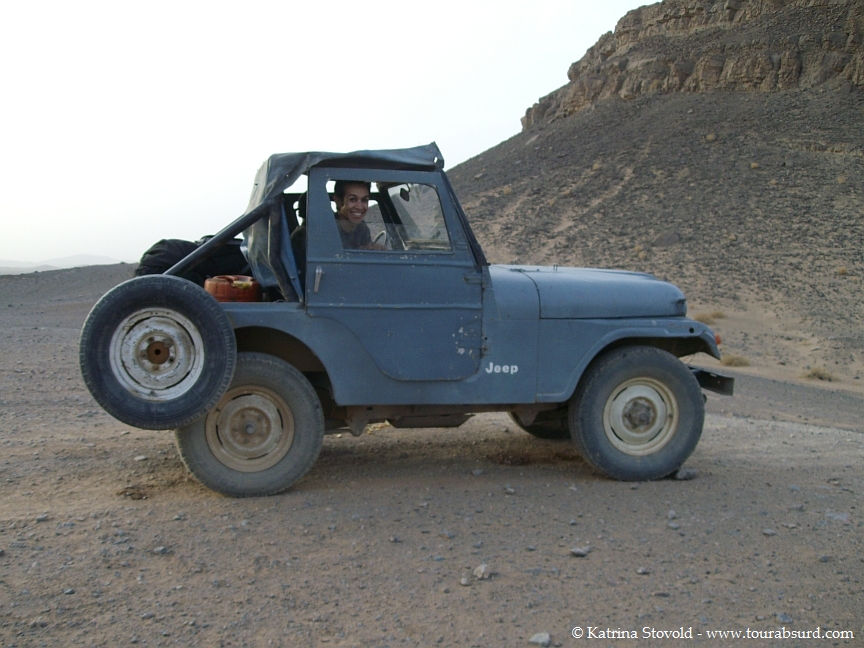 Rachid, unlike most Moroccans, is not only NOT camera shy, but appears to be an addict.

It turns out we could not have gotten a more perfect ride if we had asked.  You see, the area around Erfoud and Rissani is known for its fossils.  Like lemon stands on the Amalfi Coast, and Eiffel Tower tchotchke carts in Paris, the nearby towns are chock full of roadside fossil shops.  Our driver was part of the family who runs Macro Fossiles Kasbah, one of the largest (pun intended) fossil companies in the region, so he knew a little something about geology.  He also, as it turns out, worked on The Mummy.

Wait, WHAT?  Can you imagine the serendipity?

That's right — he's a fellow crew member!  Mr. Bouaich had worked on the movie back when it was shooting in 1998.  Freakin' fantastic!  Apparently even his trusty ol' Jeep got used as a production vehicle at some point.  He had worked at another filming location, yet knew exactly where it was that we wanted to go.  But wait — there's more!

He had been on his way to deliver some water to a nomad family in the desert when he picked us up.  Originally, he had planned to drop us at the side of the highway and continue on his way.  The crater was a few kilometers off the road, so we were going to walk there, take some pictures, then walk back and hitch another ride, hopefully before it got dark.  After some chat with Rachid, however (and possibly a little bonding moment over the crew thing), Mr. Bouaich offered to drive us right to the entrance of the crater, drop us off, run his errand, and come back for us.  I cannot imagine it being any more perfect than that.  This was, as Rachid is fond of saying, amaaaaaazing!

At that point, Rachid and Mr. Bouaich started chatting away in Arabic (or possibly Berber), so I started chatting away to myself, mumbling random quotes from the film.  Most appropriate was O'Connell's line when the two expedition groups approached Hamunaptra: "…we are about to be shown the way."  Awww, yeah!  You know you love the geek! 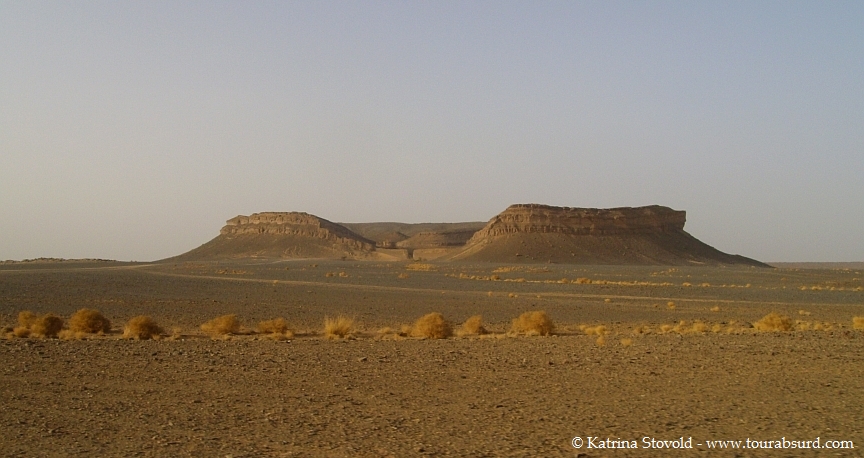 And indeed, we were shown the way.  May I present…  Hamunaptra!

As we got closer, I acquired a geeky glow and a giggly grin.  I am pretty sure I clapped excitedly.  I may have even squealed a little.  (But don't tell anyone, ok?  My dignity depends upon it.)

…Ok, for this next part, I need you to indulge me a bit.  I cannot find a linkable version of this photo anywhere online, so please do me a favor and visit this IMDb (Internet Movie Database) link to take a look at this picture: http://www.imdb.com/media/rm3769145600/tt0120616 (should open in a new window).

Now, see if you can maneuver that window into position to hold it up next to this photo: 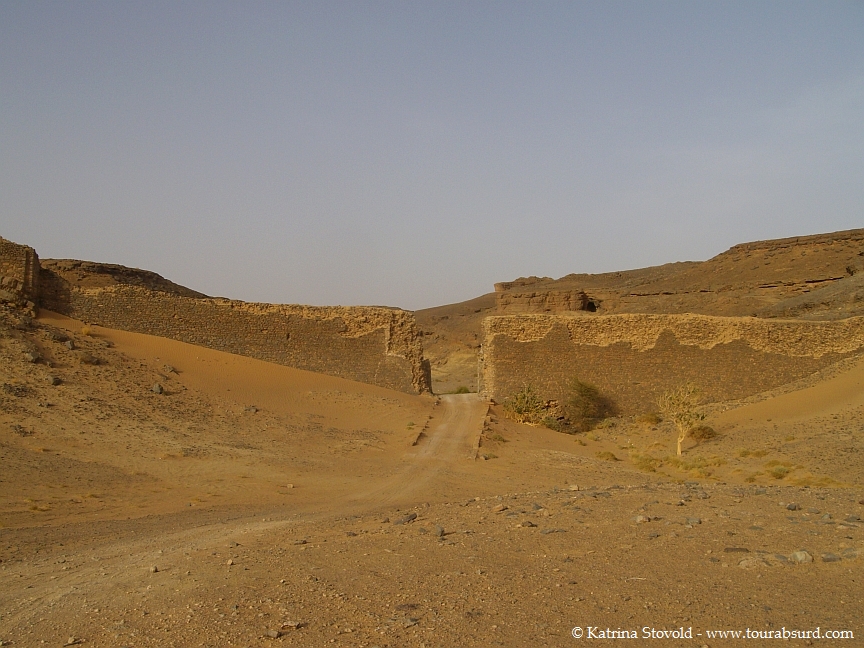 "…My whole damn garrison believed in the legend of Hamunaptra so much,
that – without orders – they marched halfway across Libya and into Egypt just to 'find' that city.
And when we got there… all we found was sand and blood."

See the wall in the background?  NIIIIICE!  Alas, there was no obelisk or giant Anubis statue, but I was still giddy.  HAMUNAPTRA!

Mr. Bouaich told us he'd be back in 30-45 minutes and drove off.  I tried not to think of one of O'Connell's other lines, "So what's the scam, Beni? You take them out into the middle of the desert and then you leave 'em to rot?"  Hmm… 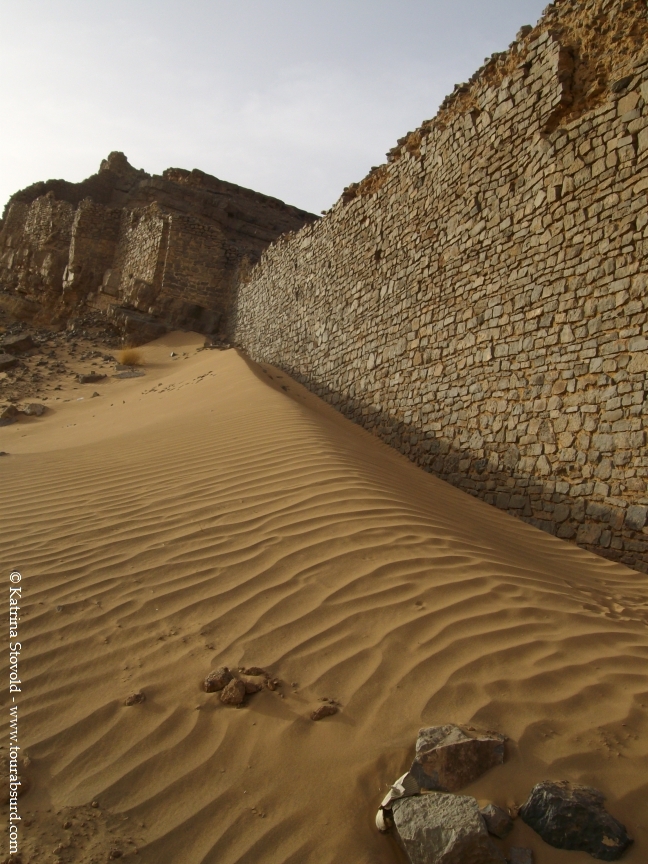 We spent our time exploring the crater, encountering prehistoric-looking trees, tiny fossils, and the remains of a stone building.  Oh, and goat poops, lots of goat poops. 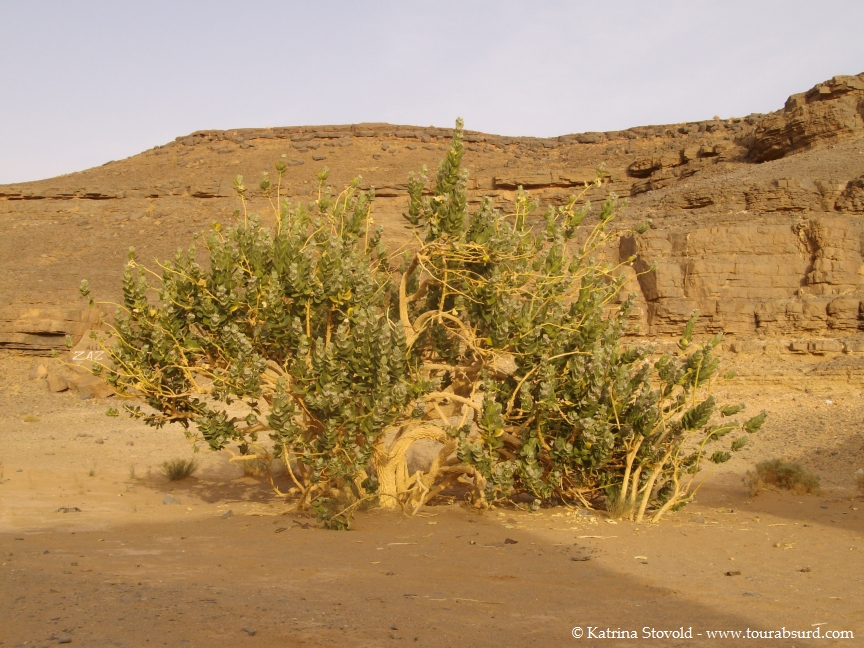 Seriously, what kind of tree is this?

The inside of the crater wasn't flat or hollowed out.  Instead, it had small plateaus and ravines, with evidence of water flow, and even attempts at damming up what looked like streambeds.  We each took a different route to the top of the nearest plateau, where we found the fossils.  Rachid, being the ham that is he is, also requested the ever-perplexing (at least to me) jumping photo. 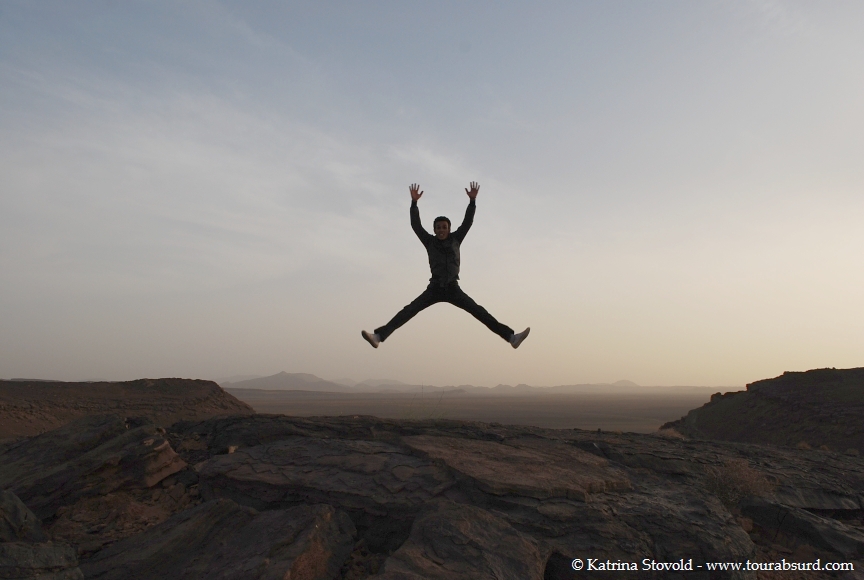 Look at how light he is.  Amaaaaazing! 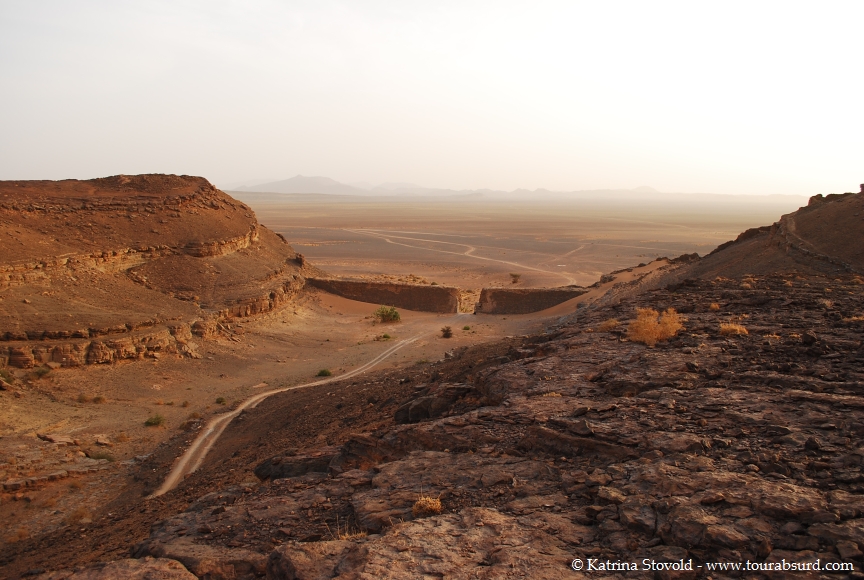 Overview from the plateau.  (Rachid's photo.)

I think the highway was more than a couple of kilometers away.  I'm really glad we didn't have to walk it.  Another thing for which I am grateful: no swarm of locusts swooping in to kill us (see 1:05 in the video ;).

Can't see the video?  Watch it on Youtube: http://youtu.be/cLnDT6uCr_I

Mr. Bouaich was true to his word and came back to get us.  In fact, he even had oranges to share.  What a nice guy!  Oh, and get this — he didn't just drive us back to where he picked us up, he drove us to the next town, Erfoud.  As I sit here typing this, I am still amazed that we had the good fortune to flag this gentleman down.  Hamdo'llah! (Thanks to God!)  All in all, a fantastic and wonderful (and by that I do mean filled with wonder) day!

What sorts of amazing good fortune and fantastic people have you encountered on your travels?

View "Hamunaptra" in a larger map

If you'd like to one day visit the City of the Dead for yourself, here is its approximate location on the map.  Good luck and may you stay safe from ancient curses, locusts, and mummified goat droppings!

27 thoughts on “Morocco: City of the Dead”