I finally had an excuse to visit Blarney Castle! Dario’s family was visiting from Italy, so I took the opportunity to head up the hill and gain the gift of eloquence (about time!). I dragged my friend, Steven, along, too. He’s a bad, bad Irishman and had never been there. That situation is now remedied, whew! (I am saving Ireland’s residents from themselves one person at a time.)

I just remembered that the first place I heard of the Blarney Stone was in a Richard Scarry book.  It is sadly out of print, but available used and on VHS. Patrick Pig learned to talk!  Woohoo! 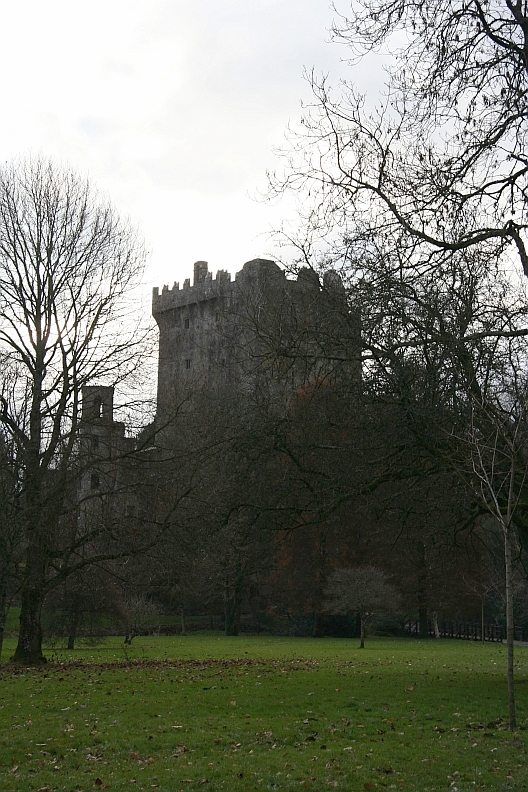 A view of the castle from the grounds.

The walk from the ticket booth (€ 10 per person) to the castle is lovely. There is a path that passes through a few picnic areas, green fields, and trees, and crosses a few picturesque streams (not pictured; oh the irony). Actually, looking at the map, I see that the bodies of water in question are labeled the River Martin and Blarney River, respectively.  Hmm.  I suppose a small child could get swept away after a particularly heavy rain, but I am not sure that anyone other than my cat would hesitate to cross. (They are really quite wee.)

Bridges crossing the strea– er, rivers — reveal that many visitors to the grounds have tossed in a coin or two to commemorate their visit.  Maybe it’s to appease the fair folk, in which case I have failed, as I did not toss in any coins. I may actually deserve all the misplaced keys and sunglasses that I now anticipate during my stay in Ireland. 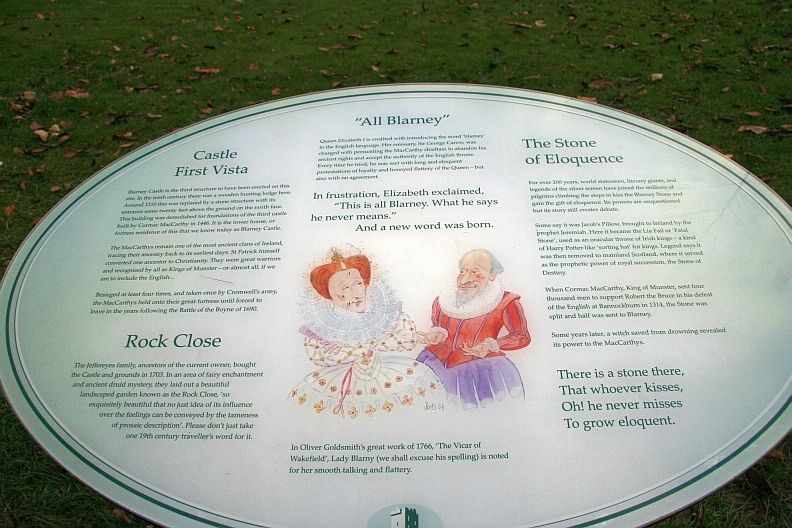 Queen Elizabeth I is reputed to be the first to equate the name Blarney with the idea of smooth talkin’.

As much as I love Rick Steves and his travel guides, I have to disagree with his assessment of Blarney Castle.  He says “…the 15th century Blarney Castle is an empty hulk (with no effort put forth to make it meaningful or interesting).” We found numerous helpful and entertaining signs posted throughout. In fairness, I believe the signs are new. Heck, they could even be in response to the unflattering description by Mr. Steves.

According to the official castle website, Queen Elizabeth I was said to have to have commanded the Earl of Leicester to take possession of the castle. The sign above further states:

Her emissary, Sir George Carew, was charged with persuading the MacCarthy chieftain to abandon his ancient rights and accept the authority of the English throne. Every time he tried, he was met with long and eloquent protestations of loyalty and honeyed flattery of the Queen — but also with no agreement. In frustration, Elizabeth exclaimed, “This is all Blarney. What he says he never means.” And a new word was born.

I say good for the MacCarthy chieftain!  *applause!* 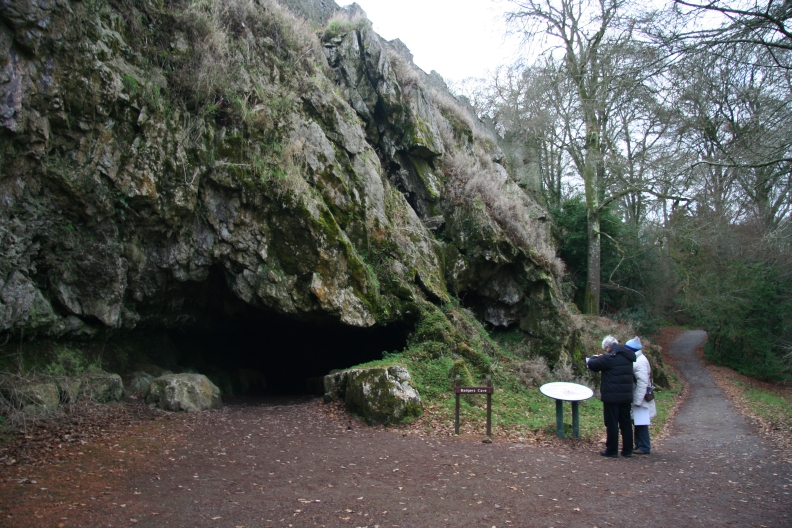 Badgers Cave. Naturally I thought of the Weebls song.  Is it stuck in your head now?  You’re welcome.

Below the castle there are numerous openings, some natural, some human-built. They all seem to have connected with the castle at one time or another. Badgers Cave is said to have allowed nearly all the castle inhabitants to escape the invasion of Oliver Cromwell and his army. (They even managed to take a fabled golden plate with them, later shipping it to Utah for safe keeping.) Good thing, too. I hear that guy was a jerk. 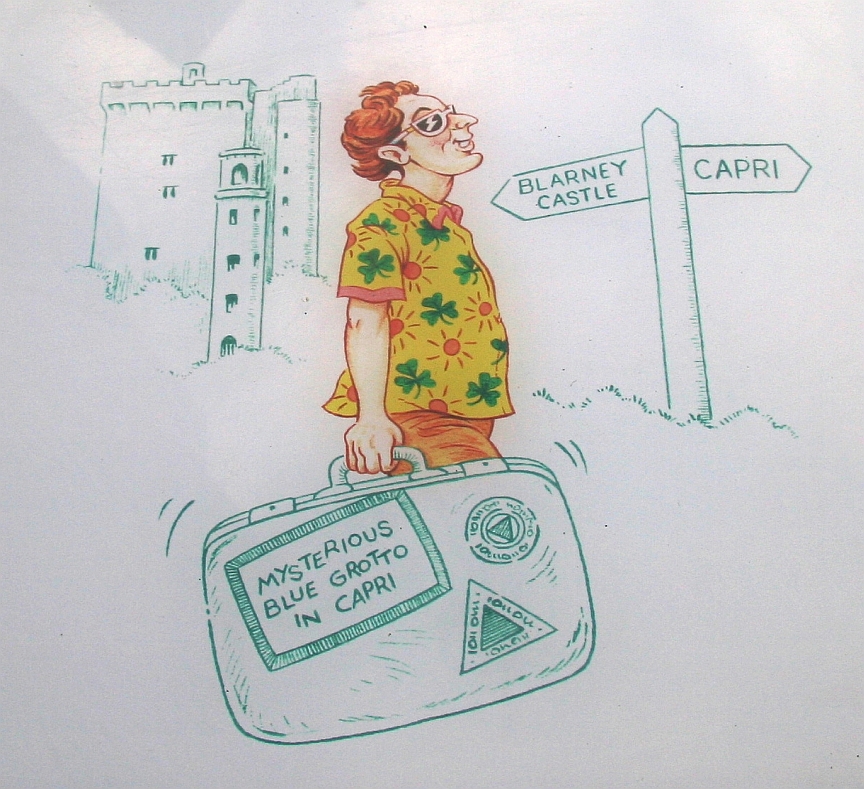 Funnily enough (wow, “funnily” is actually a word!), a sign near the entrance to the dungeon showed a picture of a traveler heading from Blarney to Capri. The caption mentioned something about a Discovery Channel list that says kissing the Blarney Stone is among 99 things you should do before you die. I’m guessing that visiting La Grotta Azzurra is likewise on the list. I’m sure Dario’s parents were glad they traveled all the way from Italy to Ireland to be shown a picture of someone going to Italy. 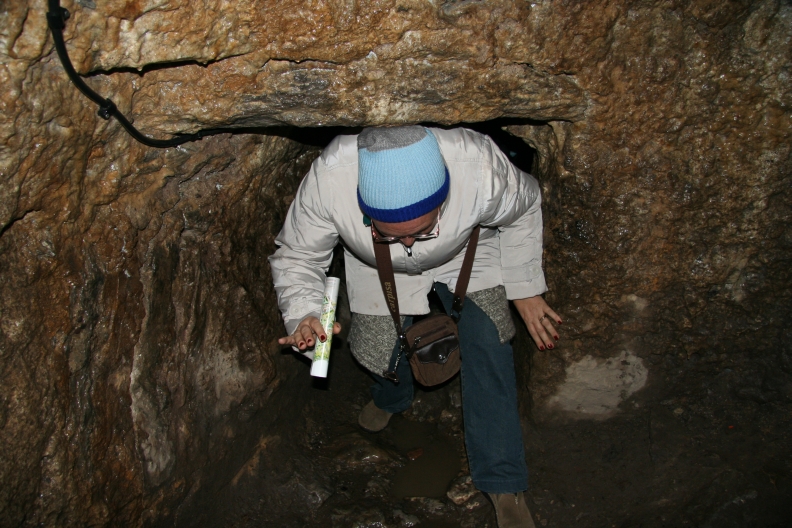 Serenella escapes from the dungeon.  She’s good like that. 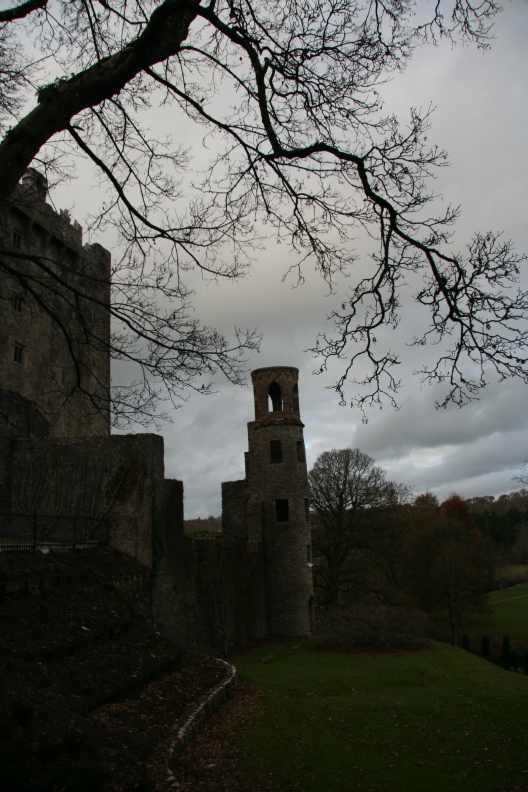 Edgar Allen Poe-esque scene.  Or perhaps Edward Gorey. No, the tower is not actually leaning
— but maybe THAT’S WHAT’S SO SPOOKY! 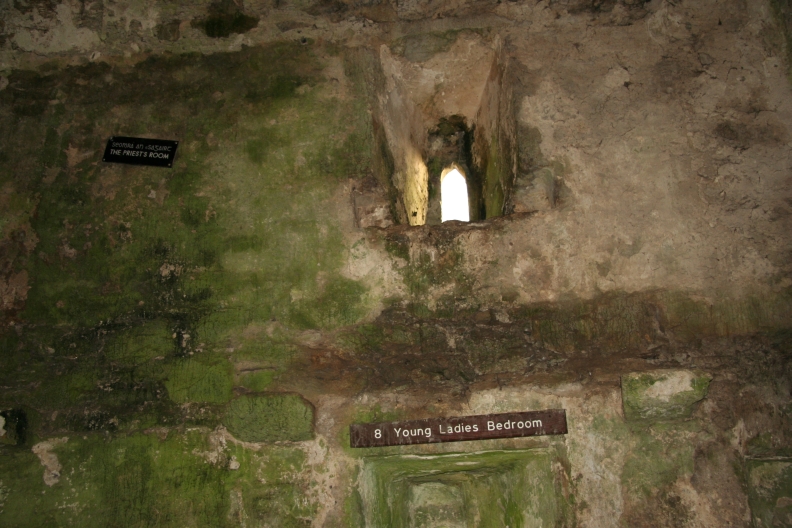 The priest is on top of the young lady.  Erm, I mean, uh…

On the climb up to the famous stone, we passed through feasting halls, the kitchen, a chapel, and a priest’s bedroom.  It was situated very close to the Young Ladies Bedroom.  Disturbingly close, in fact, considering that there was no floor betwixt the two!  I assume there used to be a floor, but you know what they say about the word “assume…”

I had done a bit of research and realized that mad yoga skills and a sense of adventure would be necessary to kiss the famous Blarney Stone.  I did not, however, realize that just getting there would be such a trek! 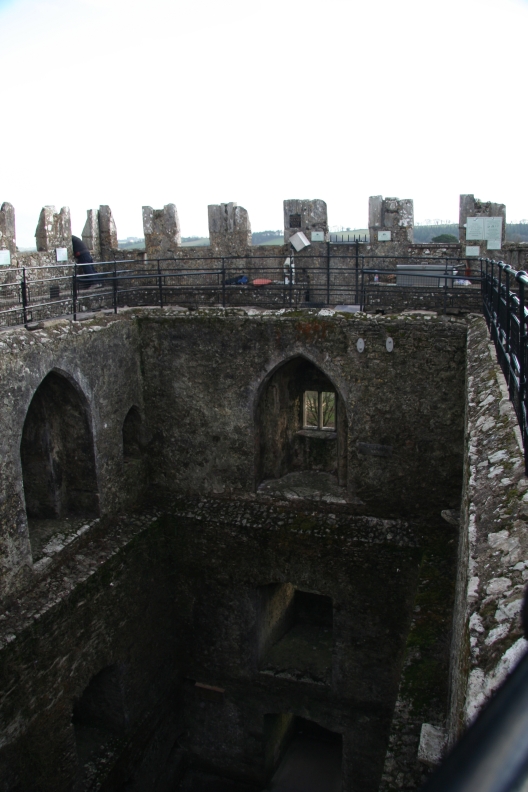 Ooooh! So that’s what he meant about it being an empty hulk.

Whew!  Made it to the top!  Narrow, squeezy, spiral stairs that got narrower toward the top.  One wonders how Oliver Hardy and Winston Churchill, who both visited the castle and kissed the stone (though probably not at the same time) managed to make it up here.  Glad I had the picture-taking excuse to stop several times on the way up. 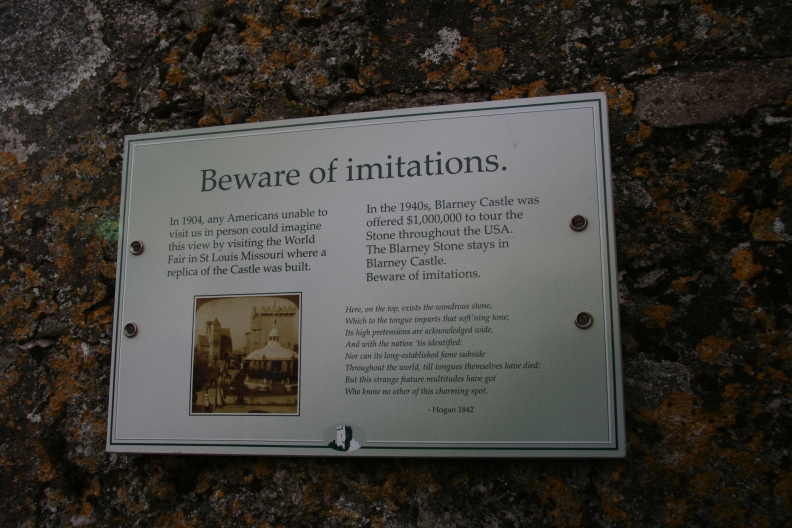 Along the way to the Stone, there were several signs discussing the history of the castle, the Stone’s place in pop culture, poetry, the difference between baloney and blarney, and what it means to be Irish. Also a warning not to be fooled by false claimants to the title of Blarney Stone!

The above poem, by John Hogan, reads:

Here, on the top, exists the wondrous stone,
Which to the tongue imparts that soft’ning tone;
Its high pretensions are acknowledged wide,
And with the nation ’tis identified:
Nor can its long-established fame subside
Throughout the world, till tongues themselves have died;
But this strange feature multitudes have got
Who know no other of this charming spot. 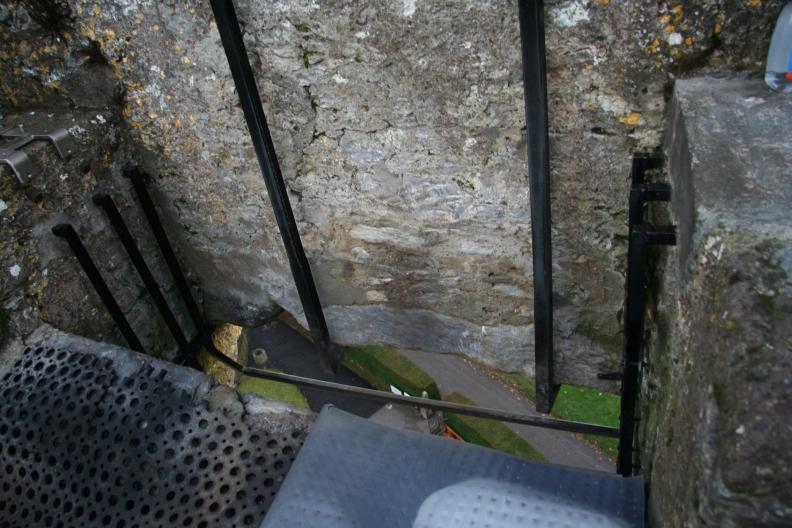 …aaaaand there it is!  Is it all you imagined it would be?

I turned around after this and grabbed a quick shot across the inside of the castle.  Somehow in turning back around I bumped a setting on the camera and managed to mess up the picture of Serenella.  Sigh.  Sorry about that.  But still, it’s proof that she did it, so I’m including the blurry pic anyway: 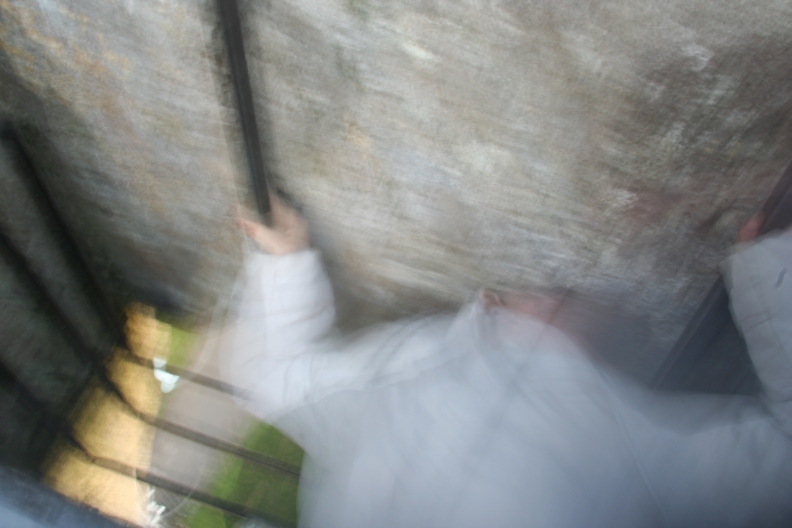 Yay!  Now she’ll stop being so shy in crowds! 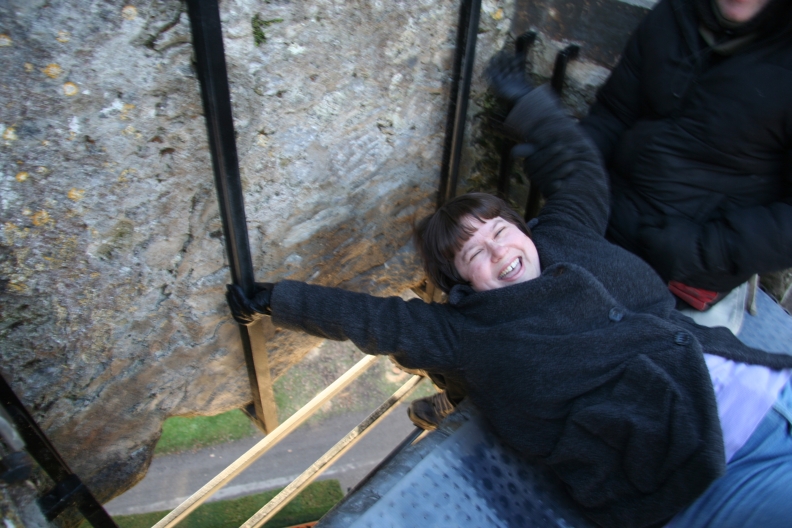 I have a gap-toothed grin.  This means I am very friendly.  And now I know how to talk. 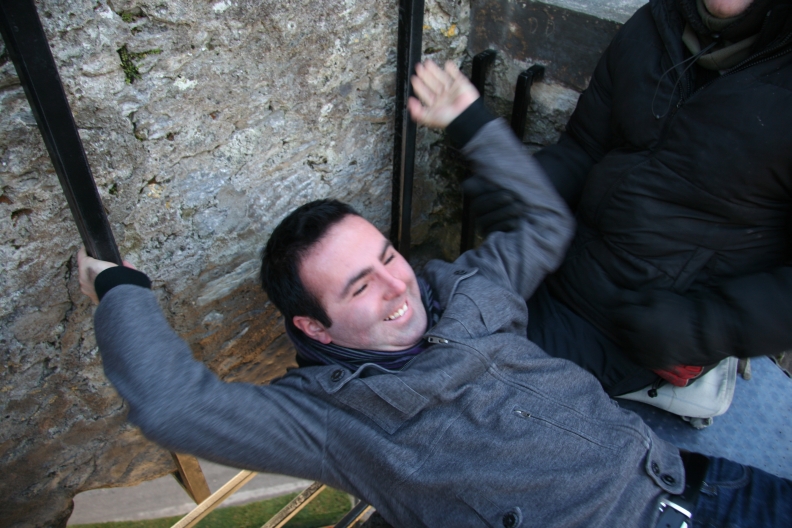 Steven is now properly Irish.  That’s good.  The fake accent was getting a little weird. 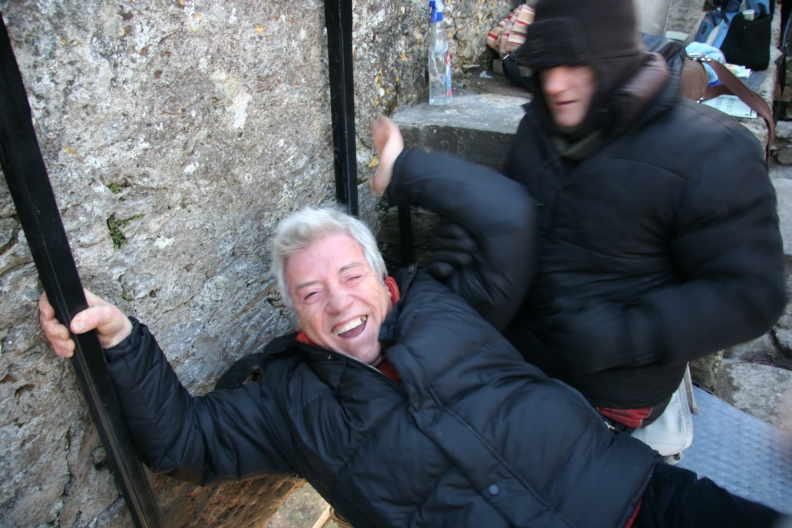 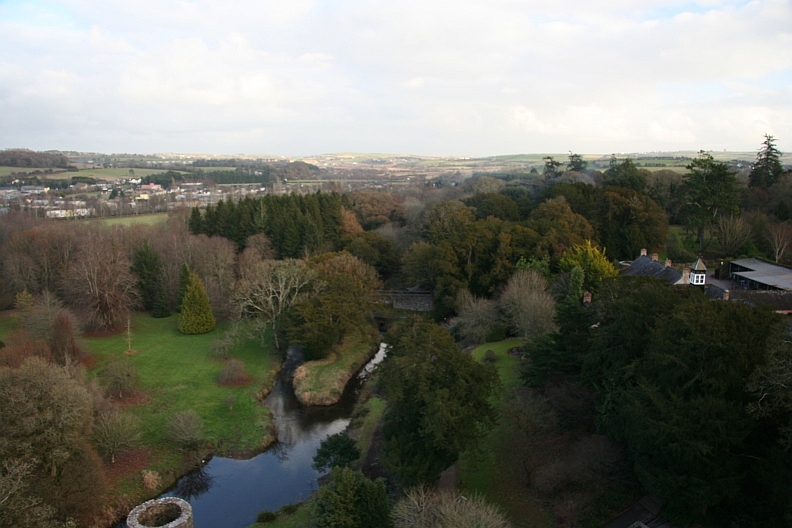 A view from the top. The stable yard, presumably part of the 17th century Blarney House, is to the right.

On the way back down, we passed by several more informative and silly signs.  Included was one of the Banqueting Hall that finally explained what the heck “craic” is! 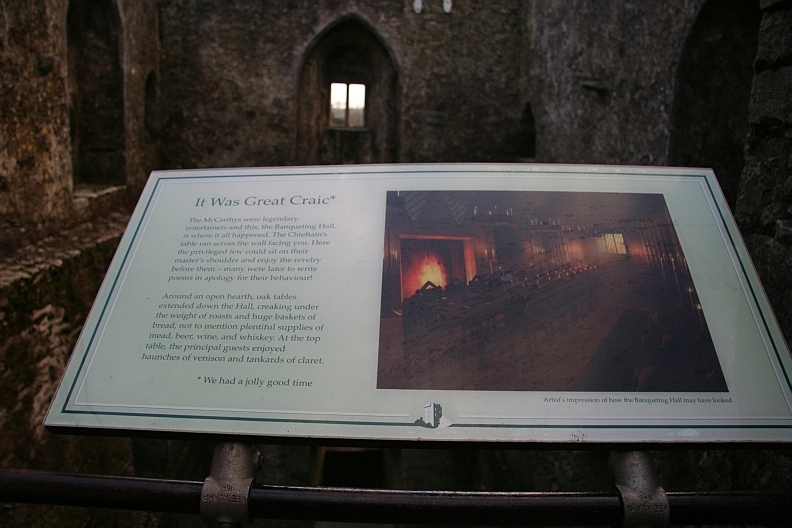 “It Was Great Craic”

The funny thing is, it’s pronounced like “crack.”  It makes it difficult to tell Dario he’s been “smokin’ the crack” when he’s all wrong-headed about something, because he just thinks I’m telling him he’s had a jolly good time. 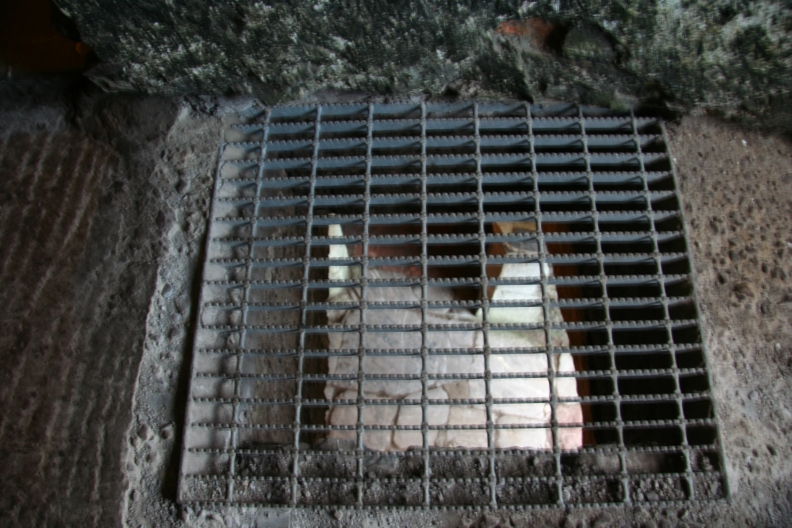 This charming little gap is called a “murder hole.” Nice, isn’t it?  You can either welcome your guests and drop rose petals on their heads or, if you suspect the pizza boy is a Cromwellian agent, pour boiling liquid on him.  I LOVE Irish hospitality! 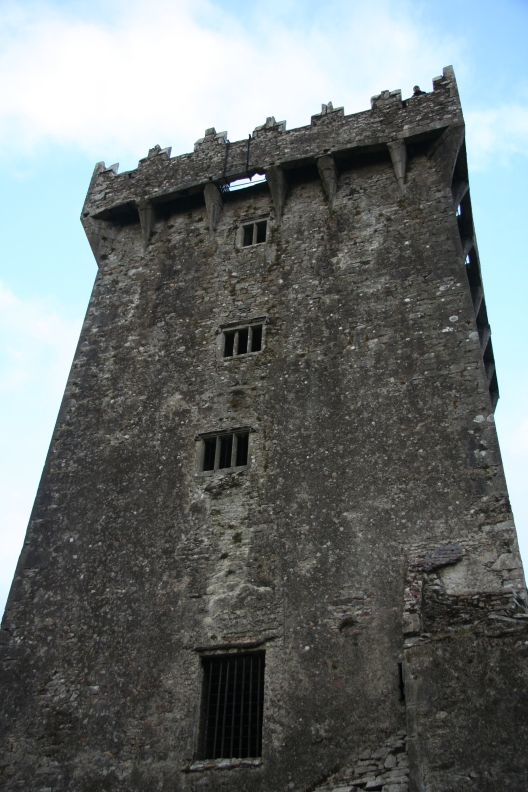 The Blarney Stone from the outside.

Woooow!  That is a ways up there, gosh.  I’m glad I’m not particularly afraid of heights, or I would have been really concerned about that drop.  Well, if anything had gone wrong, I wouldn’t have had to worry for very long.

After kissing the stone and visiting the castle, we took a quick stroll through the Rock Close, an area with lots of great rock formations, gardens, and waterfalls.  But that’s a whole different set of pictures!  …Oh, ok.  Since you insisted, I’ll put in one picture of the Dolmen. 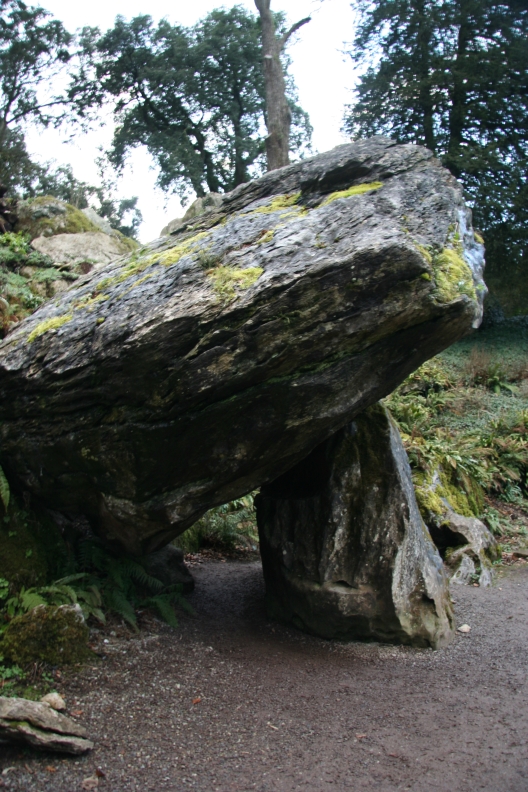 If you get the chance to visit Blarney Castle in the winter, it’s really worth going.  No crowds and plenty of time to position yourself for a proper smooch without pressure from tour groups building up behind you.  The gardens are a bit dreary, but still lovely in their own way.  Dario’s family and I discussed coming back in the summertime to have a picnic and look around at the plants and such.  Probably the best way to do it, since I would NOT want to be squeezing through the narrow castle passageways with hundreds of other people pressing to move forward at the same time. (Edit: went back with a friend and took some lovely photos of the gardens.)

Also, we had a GREAT time!  We laughed and chatted and giggled the whole way.  In this case, Rick Steves can stuff it — Blarney Castle is TOTALLY worth a visit!  And you never know — your Italian relatives just may end up with fluent English.  ;)

Have you kissed the Blarney Stone?